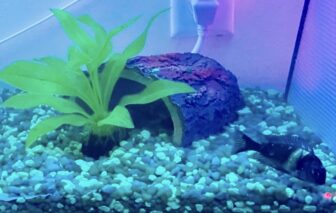 People who enjoy a good game of Monopoly or tag may have far more in common with fish than they realize.

Don’t get too excited– it is unlikely you’ll find your goldfish playing checkers or America’s favorite pastime with the pebbles in their tank. But according to a study published in June, there is some evidence that fish like to play.

When Sofia Eisenbeiser, a senior studying neuroscience and philosophy at Eastern Michigan University, set out to study if fish play, she was motivated by the implications of such a finding.

Play in humans is essential to health in the developing mind, said Eisenbeiser, the study’s lead author. The instinct to play is found in both mammals and birds. As scientists look at other creatures’ capacity for play, Eisenbeiser posed an evolutionary question: “We were fish once, in a manner of speaking. Is it possible that this requirement for enriching environments has existed from the time we had gills?”

Researchers and pet-owners have long acknowledged that mammals like to play, but the discovery that birds play is relatively new, said Janice Albers, a fisheries and wildlife doctoral student at Michigan State University.

The scientific community has only just started asking this question of play in other organisms, and fish are of less interest when it comes to studying something that may coincide with intelligence, she said.

“Only recently, like in the past ten years, has there even been scientific evidence and studies done to prove fish feel pain,” Albers said. “It’s taken a long time for the scientific and fish management community to acknowledge that probably because, you know, fish have no facial expressions.”

Eisenbeiser speculates that fish may be more advanced and more capable than they are given credit for. To find answers, she experimented with red, green and blue lasers, shining each one into tanks of fish and analyzing their behavior. Over 66 species were tested. 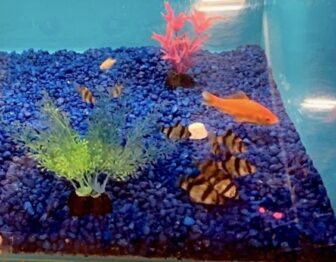 Many of the fish chased the laser beams around the tank in the same manner that cats chase them. About nine of 10 fish were interested in the laser beams, and more than half preferred the red beam, according to Eisenbeiser’s study, “Gills Just Want to Have Fun: Can Fish Play Games, Just like Us?” published in the journal Animals last June.

So, what determines whether the fish were playing? Eisenbeiser used criteria from a study, “Highly Repetitive Object Play in a Cichlid Fish (Tropheus duboisi),” done on fish playing with thermometers in 2014 by Gordon Burghardt, a professor at the University of Tennessee. A behavior was considered play if it didn’t contribute to immediate survival, it was voluntary and spontaneous, it was repeated, it mimicked a real behavior but was somehow incomplete (like when puppies play-fight) and it was performed when the animal was not stressed by things like hunger, competition and fear of being eaten.

Eisenbeiser found it possible, not definitive, that all of the criteria had been met.  She could not rule out that the fish may have considered the laser beam as a threat, which would not meet the first criterion. Therefore, she determined that there was not enough evidence from the study to conclusively say the fish had been playing.

So, do fish play? Maybe. And is play a trait that goes that far back in our evolutionary tree? Also, maybe. More testing needs to be done, Eisenbeiser said.

In the meantime, fish owners take heart. Your pets may be having more fun than you realize.