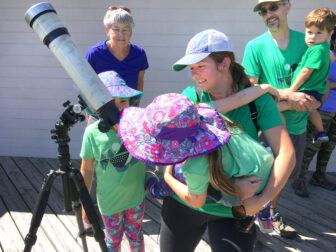 The National Park Foundation has given $1.7 million to 41 nonprofits across the country, including in the Great Lake Basin states, to help parks meet their current needs and become stronger and more resilient in the future.

The North Country Trail Association, which has taken care of 4,800 miles of trail in eight states for the past 40 years, received $50,000, according to Andrea Ketchmark, its executive director.

“The striving for this experience is what we’re trying to create for people to escape all of the pressures of society and give people a safe place to walk out in nature,” said Ketchmark.

Parts of the trail lay on private lands.

Every year, the association and hikers lose legal access to parts of the trail if the land gets sold or the owner dies, Ketchmark said. To keep the trail accessible, the association, which is headquartered in Lowell, Michigan, negotiates with landowners, said Ketchmark.

The association will use the new grant for legal protection of such parts of the trail and to create a policy to save them in the long term.

The money will be spent on a new staff member who will develop the policy that will also include how to partner with organizations such as the National Park Foundation, the Trust for Public Land and the National Park Trust to make the trail longer and better protected.

Using these partnerships, the association and its affiliates plan to build 1,700 more miles over the next two decades, Ketchmark said, and legal rights to the route and protecting landscapes will be handled in partnership with those organizations and other land trusts along the route.

“Surprisingly, a lot of people do hike both the off-road sections and then walk on the road to get to the next section,” Ketchmark said. “It’s really going to allow us to provide something for future generations.”

That goal aligns with the policy of another organization that got $80,000 from the foundation — Voyageurs Conservancy, the nonprofit partner of Minnesota’s Voyageurs National Park.

The grant will be used to educate students about the night sky and the ecological impact of light pollution in an educational project called the Dark Skies Mobile Classroom, said Megan Noetzel, its membership and communications manager.

Voyageurs Conservancy, based in Minneapolis, will also revise its curriculum to make sure it includes the culture of Native Americans.

“So right now, in general and at Voyageurs National Park, current dark sky programming is really centering on Western European constellations and understanding of the night sky and astronomy,” Noetzel said.

She added, “But Voyageurs National Park is obviously located on land that was and continues to be deeply connected to the Anishinaabe, Ojibwe and other Indigenous people who have thrived on this land for generations, and they have a very rich cultural heritage connected to the night sky.”

Those legends will be incorporated into the Dark Sky Classroom, she said.

The project started working virtually for schools in Minnesota and nationwide in 2020, according to Noetzel.

Voyageur Conservancy will spend part of the grant on a mobile classroom — a big van with educational tools inside, such as a Solar Scope, which is a telescope for observing the sun.

“And, so, (we will be) bringing something like a solar scope that a conservancy specialist could teach students about, and then they can look through it themselves,” said Noetzel.

The mobile classroom will start working in the national park next summer and visit Minnesota schools in the 2023-24 academic year. The initial goal is to reach 3,500 students and family members in the first year.

The National Park Foundation also awarded grants to other programs in the Great Lakes region:

And the National Parks of Lake Superior Foundation in Minnesota will employ more staff in effort to decarbonize park units.