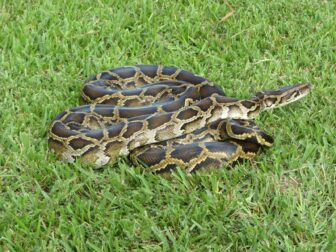 Sounds uncomfortable, if not downright creepy.

That’s what a federal grand jury has accused a man of doing: smuggling three Burmese pythons from Canada into the United States.

The incident occurred in July 2018 at the New York-Quebec border as Calvin Bautista was riding on a bus between the two countries, according to the indictment.

The fate of the pythons hasn’t been disclosed.

The International Union for Conservation of Nature categorizes the Burmese python as a vulnerable species. It is considered endangered in Southeast Asia, its native habitat, but is an invasive species in Florida, where it flourishes.

The United States has signed the Convention on International Trade in Endangered Species of Wild Flora and Fauna. The treaty monitors and regulates trade in species whose survival is considered threatened.

Under the treaty, Burmese pythons can be imported into the U.S. only with a permit or certificate from the exporting country, as well as with other paperwork required by the U.S. Fish & Wildlife Service.

In addition, the Fish & Wildlife Service requires a permit to import any species listed as “injurious to human beings,” which includes Burmese pythons.

“At no time” did Bautista apply for or receive any of the required permits or other documentation, the indictment said.

Violations can be criminally prosecuted under the Endangered Species Act..

The U.S, Attorney’s Office declined to comment on why Bautista wasn’t indicted until more than four years later – on Aug. 25, 2022 – and why authorities didn’t announce the indictment for another month and a half, on Oct. 4.

Bautista of Queens, New York, faces up to 20 years in prison and a maximum $250,000 fine if convicted, the prosecution said.