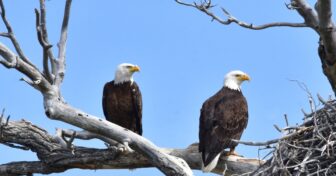 An Ohio man who admitted fatally shooting a bald eagle will be banned from hunting for five years and has agreed to pay $20,000 as part of his sentence.

Half the money will go to the National Fish and Wildlife Foundation, a nonprofit funder of conservation projects, as restitution. The other $10,000 is a fine.

David Huff of Dover pleaded guilty to violating the Bald and Golden Eagle Protection Act. That federal law prohibits shooting those eagles without a permit.

As part of the plea bargain, the U.S. Fish and Wildlife Service will destroy his rifle and ammunition.

In October 2021, Huff used a scoped rifle to kill a mature eagle from about 100 feet away. He was hunting groundhogs at the time while inspecting his Tuscarawas County farmland for rodents and pests, according to the criminal charge and a press statement from the U.S. Attorney’s office in Cleveland.

“After shooting the eagle, Huff picked up the animal and discarded it in the tree line of a bordering field,” the statement said.

A neighbor tipped off authorities.

Daniel Ball, the public affairs officer at the U.S. Attorney’s Office said, “A witness to the shooting alerted the Ohio Department of Natural Resources, Division of Wildlife which, in turn, notified the U.S. Fish and Wildlife Service.”

Defense lawyer Kevin Lundholm of Dover, Ohio, said, “The incident was a lapse in judgment, and it is something that Mr. Huff regrets.”

Lundholm and Ball said Huff was the only person involved in the incident.