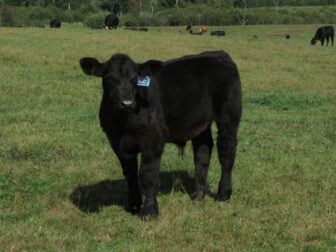 As supply chain problems continue rippling from the COVID-19 pandemic, industries are learning ways to adapt.

The meat market is no exception.

“The pandemic really highlighted a long-standing challenge for the beef industry,” said George Quackenbush, the executive director of the state’s Beef Industry Commission. “For years, we have seen a slow reduction in the capacity to process cattle.”

“We’ve quickly increased our cattle herds, and we haven’t had the processing sector increase along with it,” he said. “So, we were really right at capacity (to process cattle) in early 2020 when the pandemic threw a monkey wrench in the supply chain.”

Michigan is a “beef-deficient” state, according to Quackenbush, meaning beef consumption is greater than its production. He said the state ranks 27th in the country in the number of cattle it has, topping 1 million — a majority of which are used for dairy.

While cattle operations are scattered throughout the state, Quackenbush said dairy farming is concentrated in the Thumb region, including Huron, Tuscola, St. Clair and Lapeer counties.

As for beef cattle, 16 counties, led by Huron, have 20,000 or more head each, including Lenawee, Missaukee, Newaygo, Montcalm, Allegan, Kent, Clinton, Hillsdale, Ionia and Ottawa, according to the 2021 National Agricultural Statistics Service estimate.

Michigan grocers felt the impact of the national shortage of beef caused by an insufficient capacity to process cattle shortly after the pandemic started and meat products became unavailable.

That was coupled with a change in who was buying meat products during the pandemic’s onset — many restaurants didn’t need them because of government-mandated closures.

Meanwhile, many shoppers increased their spending at grocery stores because of an unforeseen growth in free time for cooking.

As a result, the shaky foundation that meat production rests on, with large corporate processing plants at the helm, began to crumble.

Noel Bielaczyc, a value chain specialist at the Center for Regional Food Systems at Michigan State University, said, “Organizations that normally are selling wholesale into markets — all of a sudden, half their market disappeared, and the other half blew up.

“The product specs and everything changed quickly,” Bielaczyc said. “It takes a little time to make those adjustments, and nobody really knew what was going on.”

In February, the U.S. Department of Agriculture announced it would make $215 million available in grants for farms across the country to “expand meat and poultry processing options, strengthen the food supply chain and create jobs and economic opportunities in rural areas.”

That money, according to USDA Secretary Tom Vilsack, will create greater competition among farmers in the meat industry, while also localizing supply chains.

Gary McDowell, the director of the state Department of Agriculture and Rural Development, said he sees the importance of generating more opportunities for local farmers wanting to produce meat.

“The pandemic really shined a light on that,” McDowell said. “You walked in and you didn’t see any protein in your stores, or very little, because we have four or five corporations that control 80 to 85% of the meat that’s processed.

“You can see how important that is for our local communities to have their own processing,” he said. “It helps our farmers. It gives them a local market, and people feel much more sure that their food is safe when they know it was grown locally.

McDowell said he recommends the department invest $30 million in state funds next fiscal year to further develop the food and agriculture industries.

Rosemary Linares of Ann Arbor said she and her husband, Damian Rivera, are launching a local slaughterhouse business in Washtenaw County.

Called Damian’s Craft Meats & Catering, the business, she said, incorporates values that large corporations may not pursue, like environmental stewardship.

Linares said the distributors they’ll work with have smaller herds that don’t usually go through the conventional supply chains that large processors use.

At a local level, she said their business can save farmers time and money.

“There’s this huge gap (of slaughterhouses) between Washtenaw County and Flint,” Linares said. “There aren’t any existing USDA-inspected slaughterhouses in this area, so local farmers won’t have to pay so much to travel with their animals.”

The Beef Industry Commission’s Quackenbush said local efforts like that create community economic opportunities, enhance an appreciation for meat products and build a relationship between the farmer and the consumer.

“It’s absolutely part of the solution,” Quackenbush said about localizing the supply chain. “We need processing capacity and distribution ability at every level.”

However, he said that although many consumers care where their food comes from, he’s not sure that will persuade them to buy local — and potentially more expensive — products than cheaper options.

“Price is really important,” Bielaczyc said. “If you put two products in front of consumers, one from Michigan and one generic, and all else was equal but the price was much cheaper for the generic one, most people would probably just buy the generic one.”