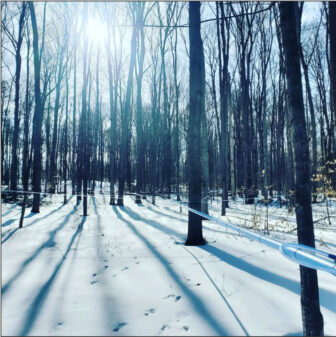 Michigan maple syrup farmers sound optimistic that the industry will see a successful 2022 season after production declined in recent years.

Gary McDowell, the director of the state Department of Agriculture and Rural Development, said low sap production is due to the changing climate.

“It’s gradual…which is why it’s not been taken seriously,” said McDowell.

However, local farmers say they remain hopeful this season will see a production increase.

“I think every farmer has to be optimistic, whether it’s maple syrup or you plant corn,” said Gary Shepherd, the owner of Bonz Beach Farms in Onaway.

Shepherd said his farm just began tapping its 4,000 trees and hopes to see a higher volume than in 2021.

“Last year we had really crazy weather. We had 70-degree days in March, and then it would get real cold again,” said Shepherd.

Days with temperatures in the 40-degree range and nights around 25 degrees are ideal for syrup production, and this year’s forecast seems to better align with that range, he said.

Shepherd and other maple syrup producers in the state said their use of vacuum systems rather than traditional taps and buckets has allowed them to maintain the production levels they have.

“They let us get about 30% more of a yield than you would collecting sap in a bucket hanging out of a tree,” Foster said.

Foster said the new vacuum systems have been popular in Eastern states for over a decade now, but gained popularity in Michigan only in recent years.

The vacuum systems, on average, produce up to a half gallon of syrup per tap during a good season while buckets yield only about one quart.

While production of syrup has been down, the number of farmers in the industry in Michigan has been growing, he said.

“There are a lot of smaller producers getting into it, backyard people looking for things to do in the spring.”

Shepherd said he’s seen an increase in demand at his farm as well.

“I think we’re probably one of those rare businesses that COVID maybe helped a little bit with the fact that people started to eat at home more,” he said.

With more demand than product available, Shepherd said his farm had only one remaining barrel of syrup last year and was in a position to turn business away if only one more customer bought syrup from his farm.

“I hope we have a good year because if we don’t, I’m going to be searching for syrup myself.”