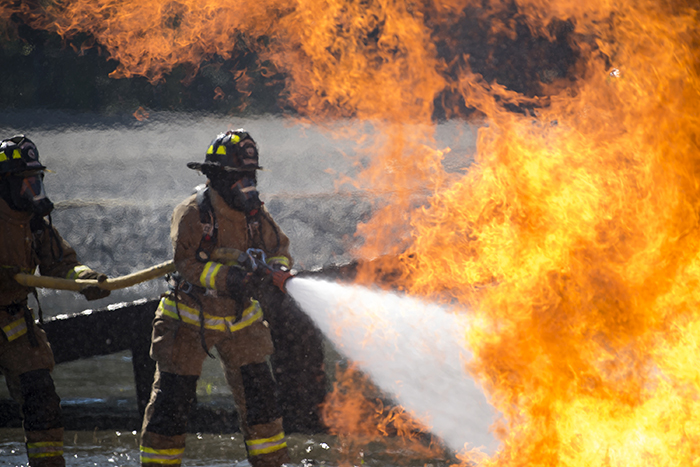 Michigan has disposed of more than 50,000 gallons of potentially harmful firefighting foam since 2019.

The foam targeted for removal contains PFAS, an abbreviation for perfluoroalkyl and polyfluoroalkyl substances, a group of manufactured chemicals used since the 1950s, but that scientists now link to harmful effects on people and the environment. Because of this, the state is working to limit their use.

“When I was a firefighter, we weren’t aware this foam was that bad for us,” Yaroch said. “Now that we know, we need to take action.”

Michigan is one of the leading states on these PFAS issues, especially as it relates to firefighting foams, Yaroch said.

The foam is no longer allowed for training or calibration of equipment, Yaroch said. But it’s still needed to put out what are known as class B fires, the kind that involve substances like gasoline, oil and jet fuel.

The state assists with disposal and encourages purchases of safer foams.

But disposal still has substantial costs for many communities, said Wixom’s fire chief Jeff Roberts, president of the Michigan Association of Fire Chiefs.

“Sure, they took it away free of charge,” Roberts said. “But you lose the investment, and foam is not cheap to begin with.”

Also, some fires still require it, he said. This includes airport fires where, previously, hazardous Teflon-based foam was used.

The fire service is searching for alternatives, Yaroch said. Dow Chemical in Midland is researching alternatives.

Meanwhile, firefighters report the use of PFAS foams to a Michigan pollution hotline.

“We use the reports to make sure cleanup is done,” Dean said, “and that the site is documented as a potential contaminated site.”

“We found one that is very readily committed to being PFAS-free,” Weed said. “So we switched to make sure we were on the safe side.”

Other departments may be less aware of these alternatives, he said. Or they may be too busy to address these issues.

Other groups encourage the military and Federal Aviation Administration to switch to PFAS-free options.

A study by the Environmental Working Group found PFAS-free foams are commonly used to fight class B fires at airports, chemical companies and military installations across the globe. The group says there is no reason to delay the switch.

Michigan is moving in the right direction, Weed said. It may seem it has more PFAS than other states, but that is because of the large amount of testing done here.

PFAS issues are important in Oscoda due to the now-decommissioned Wurtsmith Air Force Base, Weed said. After the local fire department switched foams, the Air Force continued using the PFAS-based supply.

Weed said he believes that’s because the Air Force wants to use its stockpile and avoid the costs of replacement.

Given the involvement of the Air Force and Oscoda’s smaller population, Weed feels the issue is often overlooked.

“We seem to kind of get treated like we’re just some people in the woods,” he said. “We don’t have to worry about them, that’s a federal problem.”

But all Michigan residents should be concerned, Weed said. Once it hits a body of water, PFAS can quickly spread across the Great Lakes and even contaminate municipal systems.

Moving to new foam options is important, Yaroch said. “This is better for our firefighters and it’s better for the environment.”

PFAS in firefighting foams will be discussed at the Great Lakes Virtual PFAS Summit Dec. 6-10.