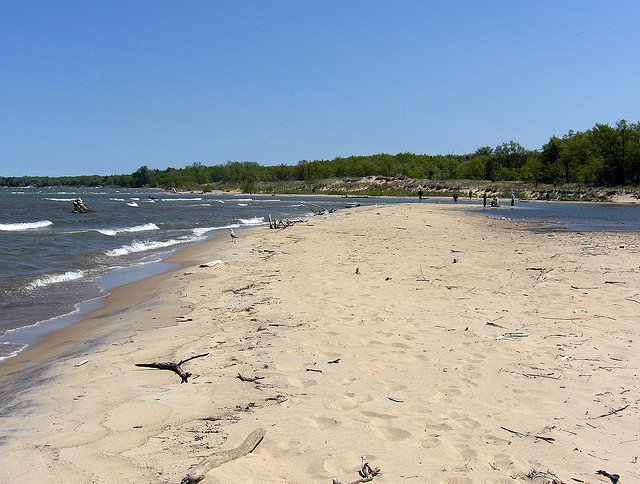 The agency says the Web-based app will help communities and “citizen scientists” protect swimmers and other recreational users from contaminants and identify sources of pollution.

To download the free app, users must request credentials from the EPA.

In 2007, Michigan received an EPA grant to develop BeachGuard, a website that showcases data from 1,778 beaches where water samples are collected.

Local health departments collect samples from those beaches, run lab tests to look for bacteria, compare the results with water quality standards and then determine if it’s safe for people to swim there.

Now, local health departments have the option to use the new EPA app to log the “sanitary survey,” a routine part of the water testing process. The current process is to upload survey observations to the BeachGuard website through an internet connection.

With the app, the survey can be completed on-site and without an internet connection.

The survey data collected includes weather conditions, number of birds, dogs or people at the beach, location and condition of bathrooms near the beach, amount of algae, land use, location of stormwater drains, surface water quality and residential septic tank information.

In the past, the EPA app has been used to monitor ocean water, but it is now expanded to include freshwater. The app also allows photo storage, location data and links to weather-related information.

But Michigan is already ahead of the game in collecting water testing data, according to Shannon Briggs, a toxicologist in the Water Resources Division of the Department of Environment, Great Lakes and Energy.

Local departments work in their own laboratories and university laboratories, collaborating and exchanging information.

He said his department collects three samples per site weekly, then runs the samples through a lab in Ludington. He calls that process the traditional testing method.

Briggs said it can take up to 24 hours to get the results from traditional testing.

However, new instruments under development in Michigan can provide results within a few hours.

They will also be able to track fecal contamination in the water, and if contamination is found, the new instruments can determine which species it came from, for example, Canada geese or ducks, Briggs said.

The counties in District Health Department #10 have 60 beaches listed on BeachGuard.

Reichard said, “Most people assume that the beaches they go to are routinely tested.”

But that’s not usually true for the most part with inland lakes where swimming areas aren’t tested on a regular basis, he said.

The state has more than 11,000 inland lakes, according to the Michigan Inland Lakes Partnership.

Last June after heavy rains, stormwater runoff and sewage overflow led to seven beach closures in Grand Traverse County, three in Leelanau County, four in Macomb County, one in Huron County and one in Isabella County, according to the BeachGuard website.

The closures lasted one to seven days, with the exception of Stony Creek Lake, which was closed due to construction.  Impoundment in Macomb County, which lasted 36 days.

Deborah Nagle, the director of the EPA Office of Science and Technology, said that with the new app, “community members can play a part in ensuring safer recreation.”

The EPA said information obtained through the app could “promote safe public access to urban waterways and lead to aquatic ecosystem restoration.”