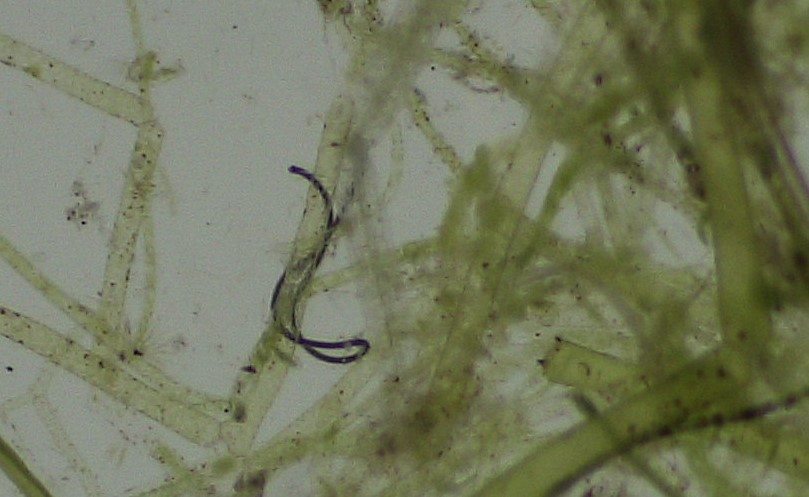 A type of algae that a recent study found collects microfibers brings up questions about microplastic pollution impacts and how it could affect human health.

The study, which will be published in the Journal of Environmental Pollution in May, found that cladophora algae adsorbs microfibers, meaning that the plastic attaches to living algae cell walls.

Adsorb is not to be confused with absorb, said Julie Peller, the lead researcher and a chemistry professor at Valparaiso University. Adsorb means the microplastics, or microfibers, adhere to the surface of what is being absorbed.

“Every time you run a load of laundry with the microplastics, microfibers are coming off,” Nelson said.

It isn’t just laundry, Nelson said. Microplastic can find its way into waterways through litter as well, where its small fibers can pollute the water.

“It’s just the prevalence of plastic in our society,” Nelson said.

Microplastics are lightweight and can be moved easily by wind. These fibers are found even on dunes. Eventually, they find their way into the  digestive tracts of birds and fish and other animals.

As for plants, at a microscopic level, cladophora algae adsorbs microfibers which bind to their cell wall, Peller said. However, when the algae die, the microplastics come off, the study explains.

Nelson suggested that could mean that microplastic pollution may be worse than scientists thought. Researchers typically test the top five to 10 feet of a water body for pollution, she said. If the microfibers detach after algae dies, they may sink to the bottom where they aren’t found.

Peller suggests this could also give some insight into how to clean up microplastics in the Great Lakes. We learn how to fix problems humans cause from what nature does, Peller said.

“I think that there might be a mechanism in place here that can be somehow used to try and engineer processes,” Peller said. “I think a large amount of these microfibers end up in waterways because of our wastewater discharge right from our households.”

While wastewater treatment plants do a good job of cleaning water before its release, low amounts of microplastics are still a problem, Peller said.

Cladophora acts as a vacuum cleaner in the water, Peller said. How this algae picks up microfibers might give engineers a means to study how to clean up microplastics.

“I’m not an engineer but I’m thinking that this might be able to give us an insight into having an additional means of processing water,” Peller said.

Algae like cladophora can operate as its own ecosystem, said Murulee Byappanahalli, a U.S. Geological Survey microbiologist who also worked on the study.  At least in the Great Lakes, the algae provide a habitat or opportunity for microfibers to attach, just like it houses fish that recently hatched.

Other aquatic vegetation can similarly adsorb these microfibers, Byappanahalli said.

The study is more of a foundational piece and could indicate that microplastics are an even greater health threat than previously thought, Nelson said.

“I think about on a day-to-day basis since I teach human physiology: Well, if these microfibers are sticking to the algae cells, are they sticking to our cells and our intestines?” Nelson said. “So, I think that it’s sort of a foundational paper in the sense like… we’re reporting that we see these microfibers sticking to algae, what can we do now?”

Microplastics have been found in human bodies, according to a study published in 2020 in Environment International. This study found microplastics in human placentas, which causes concern because these substances may disrupt the body and cause long-term effects, the study said.

More research is needed to understand if the microfibers harm the algae, Nelson said. As a foundational piece, finding that microfibers and microplastics attach to plant cells instead begs questions about how they affect the human body and clean-up efforts.