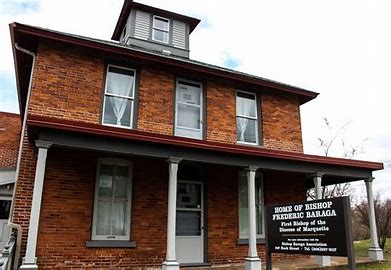 The house purchased in 1864 for Bishop Frederic Baraga is open to the public. Baraga was known as the “snowshoe priest” for using snowshoes to travel between Native American missions. Image: Bishop Baraga Association

The Sault Ste. Marie Commercial District, settled in 1668 by European immigrants but occupied by Native Americans thousands of years earlier, is worthy of recognition for its commercial history, ethnic culture and architecture, according to the National Park Service.

That significance earned Sault Ste. Marie a new spot on the National Register of Historic Places.

The Soo Commercial District is in the heart of the city, in Chippewa County in the eastern Upper Peninsula. Sault Ste. Marie is the oldest city in Michigan, and one of the oldest in the United States. Throughout its history, flags of several nations have flown over the city, according to the Sault Ste. Marie Pure Michigan website.

There is still debate on the exact meaning of “Sault,” but scholars believe it’s from early French dialect that translates into jump, referring to the place where one needs to “jump” into the St. Marys River due to the location of the city.

The commercial district “is significant for its commercial history and its architecture. It has a significant role in ethnic heritage, entertainment, and recreation and is the center of the local county government,” said Todd Walsh, the National Register coordinator in Michigan’s State Historic Preservation Office.

The district contains 151 buildings and structures that represent the social and economic trends, culture and architectural significance prevalent in the U.P in the late 1800s and early 1900s, according to the letter nominating the site for recognition. 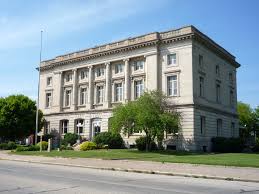 The Federal Building in Sault Ste. Marie is part of the Soo Commercial District recognized on the National Register of Historic Places. The building was constructed in 1910 as a post office and site of federal government operations. It is now the Soo’s City Hall. Image: Wikipedia.

The National Register is an official list of the nation’s historic places that are worthy of preservation. It’s part of a national program to coordinate and support public and private efforts to identify and evaluate history.

“The nation’s official list are places important to history. The architecture, connection to a person, the way they tell information about the past and history are what makes places able to be nominated to the National Register,” Walsh said.

To be considered for the list, sites must be remarkable in “American history, architecture, culture and archaeology, while being connected to events that have made contribution to trends in history or linked with persons in the past,” according to the National Park Service.

“After the National Register nominates a place, a federal form is filled out and sent to the National Park Service,” which decides whether the place or building goes on the pending list,” Walsh said.

Sometimes a community nominates its district or individual buildings for the National Register.

“The National Register of Historic Places is a bottom-up program. In some cases, the town participates in a certified local program, a program where communities wish to emphasize preservation in their residential and commercial area,” said Jim Gabbert, an historian at the National Register.

The Soo has a rich history. Over 2,000 years ago, Native Americans began to gather in the area for fish, fur and other resources found along the river.

The strategic location and natural resources along the Saint Marys River made it a highly valued spot and resulted in conflict among groups.

The French and British fought over the area and trading rights with Native Americans in the 1700s.

After the War of 1812, settlement in the area increased when the border disagreement between Canada and the U.S. was resolved at the St. Marys River.

The city grew due to the location by the river, and copper boomed in the 1840s. The boom in the 1880s and 1890s led to more buildings being constructed.

The newly recognized district encompasses early homes, as well as the historic business area. There are commercial blocks, church buildings and residences that have been converted to commercial use.

A substantial number of buildings are associated with different ethnic groups, such as Italians and Greeks, according to the Sault Ste. Marie history website.

Approved properties may be eligible for federal grants and tax credits, according to the National Park Service. That allows listed sites to be taken into consideration in planning federally funded projects, while receiving historic preservation grants.

Gabbert said, “In order to achieve the historic tax credit, the rehabilitation has to follow the secretary of Interior’s standards which allows the building to be brought into a new use while preserving its essential historic character.”

Owners are allowed to make changes to their properties without being removed from the list, as long as they don’t take away the historic meaning, he said.

“If an owner wants the federal credit, they have to follow the guidelines. If they don’t follow the rules, they don’t get the credit, but they are allowed to do whatever they want to their buildings while remaining on the list,” Gabbert said.

Many communities use their National Register listing for historic districts as part of their overall marketing strategy.

“There have been many studies in numerous states where they look at the economic impact of historic preservation, and it has a positive impact and heritage tourism is a major part of that,” Gabbert said.

Walsh said, “Places on the National Register hold a sense of pride and integrity, and listings are often used to promote tourism as honoring their heritage that resides there.”