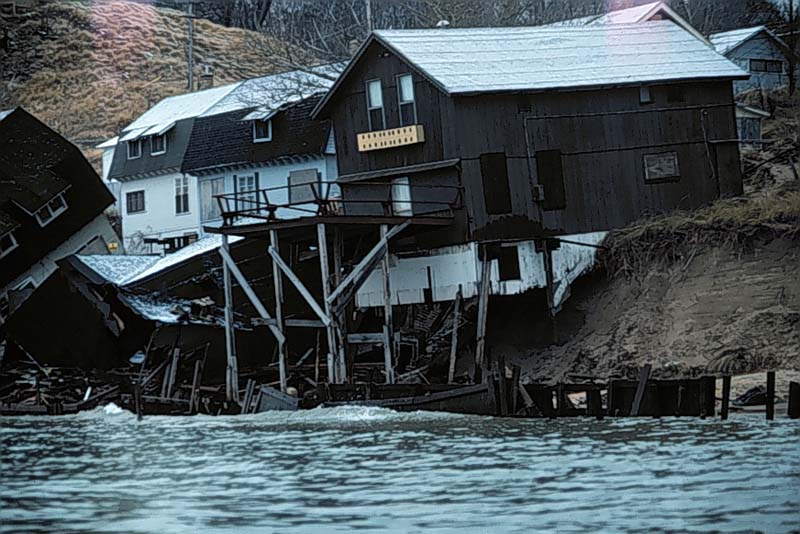 Lake Michigan water levels this year are breaking records set in 1986. Some shoreline homes—and their septic tanks—share a similar fate to this home in 1985. Image: National Oceanic and Atmospheric Association, Flickr.

Four out of the five Great Lakes set water level records for February, according to the U.S. Army Corps of Engineers.

Lake Michigan saw the biggest increase of over 5 inches, breaking the February 1986 record of 581.3 feet.

The floodwater had backed up sewers and caused towns to install sewer caps to prevent the water from backing up into the streets, according to the New York Times.

With the increased occurrence of floods this spring from the Great Lakes, inland waters and groundwater, residents should keep an eye on their wells, according to experts

Contaminated floodwater may infect wells and sewer systems, with the greatest risk of contamination in flood zones, according to Doyle Berg Jr. of Berg Well Drilling in Traverse City.

A common style of private wells in Northern Michigan is the artesian well, with no pump. Water flows naturally.

Due to the constant movement, contaminated water can’t backflood down the well, keeping the water clean, according to Berg.

Homes along the Great Lakes also have wells that are drilled in well pits, which can be susceptible to flooding, according to Dan Thorell, the environmental health director of Grand Traverse County.

Health risks can occur from a contaminated well. Bacteria such as E.coli and rotavirus can be found in contaminated water, along with deadly substances like lead and nitrate, according to the federal Centers for Disease Control and Prevention.

“It’s like a beach — some beaches, when they are tested, some are good and acceptable for swimming,” said Thorell. “Sometimes, they’re closed because they are contaminated with sewage or waterfowl feces.

“If a well did become submerged in surface water, we would immediately tell people not to drink the water and disinfect the well as soon as possible.”

Wells aren’t the only worry.

“[Septic systems], from our standpoint, is almost a bigger concern,” Thorell said. “You have these bluffs that are eroding and property that is falling into the lakes.

Flooded rivers, lakes and other bodies of water can become contaminated from septic systems, according to Thorell.

“That means there’s no treatment going on and could potentially impact the surface waters,” he said.

In many older homes, the sanitary system and emergency storm systems are combined into one system.

That can cause contamination, according to Nick Assendelft, the public information officer for the Department of Environment, Great Lakes and Energy.

“You might have a combined sewer overflow,” Assendelft said. “If you have a large storm and the water table is high, or you might have flooding from lakes or rivers that are high, and that gets into the combined sewer system, that could create some contamination with overflows.”

Thorell said older municipal sanitary sewers are known to have cracks, and older sewer lines can be vulnerable to contamination.

And Assendelft said, “High water levels are going to be with us for a while, so it’s important that people are aware of the impacts and aware of their personal situations. They need to have some work done, they should start this process as soon as possible.”

People concerned about contamination of their wells and water should apply for well drilling permits as soon as possible, according to Assendelft.

“Right now, it’s hard to find contractors because so many people want shore work done,” he said. “Permits are good for five years, so if you put in a permit now and the work can’t get done until next year, at least you are one step ahead of yourself.”