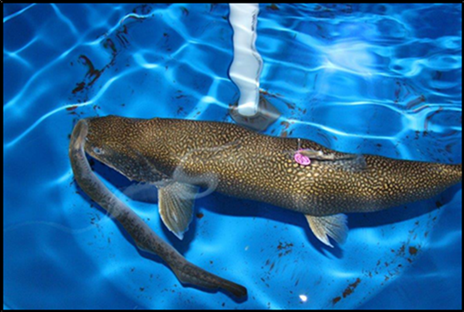 Invasive sea lamprey are known for sucking the life out of fish, but what about the survivors?

Tyler Firkus, a Michigan State University fisheries and wildlife graduate student, hopes to answer that question for lake trout in the Great Lakes.

“About 45 to 75 percent of lake trout actually survive after they’ve been parasitized by sea lamprey,” Firkus said.

Sea lamprey use their suction cup-like mouth filled with sharp teeth to attach to and suck the bodily fluids out of fish like lake trout.

Firkus studies if survivors of such attacks can reproduce, grow and defend disease as well as non-parasitized fish. He allows sea lamprey to attach to lab-raised lake trout for four days before removing them. He then monitors the lake trout’s health for a year.

Turns out, swimming around with a hole in their body has some serious long-term health consequences.

Firkus is finding that even a year later, lake trout that have been attacked by sea lamprey produce much less sperm than those that haven’t been attacked.

And the severity of the wound left by sea lamprey influences the magnitude of health consequences for lake trout, he said.

Severe wounds happen when sea lamprey actually break into the flesh of the fish, where less severe wounds result when the lamprey just scratches the surface.

The research could have implications for estimating how many lake trout are in the Great Lakes.

The Great Lakes fishery is valued at over $7 billion annually and supports more than 75,000 jobs, according to the Great Lakes Fishery Commission. Incorrect population estimates for Great Lakes fish may result in overestimated harvest limits, risking the collapse of fisheries important to the state economy and to anglers, Firkus said.