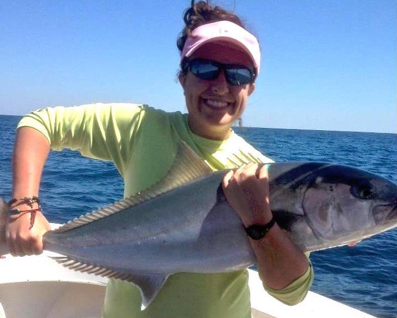 Chelsey Crandall started the #fisHER hashtag by sharing this photo of herself on Twitter.

Women who fish have created a new Twitter hashtag to promote awareness of their growing numbers.

Chelsey Crandall, a fisheries and natural resources scientist from the University of Florida, tweeted recently that most depictions of fishers and fisheries scientists feature men, and “we are not OK with that.” She launched the hashtag #fishHER with a picture of herself and a fish.

Within 48 hours, more than 50 women used the hashtag to share their photos of themselves holding a fish. Around 20 percent of the images came from the Great Lakes region.

“I do not use Twitter very much, but I have seen that hashtag,” said Erin Murray, the vice president of the Women Anglers of Minnesota, “I love what it stands for. I think it’s awesome.”

Women Anglers of Minnesota, the oldest active fishing organization for women in the country, held its 42nd Annual Tournament on Woman Lake in Cass County, Minnesota, last June. The event attracted 142 women, from experts to novice, to compete for fun and a $2,000 grand prize.

“For a long time, fishing has been mostly male-dominated,” Murray said. “When women come into the industry, there is a lack of resources and gear made for women. And there are not so many clubs like ours that provide education and equipment to the female community.”

“Our mission is to really break down those barriers and help more women get out on the water,” Murray said.

The Woman Ice Angler Project held an event focused on empowerment and facing fears last January on Lake Superior. It has scheduled another event, called Fish Camp, at Donners Bay Resort, in Butternut, Wisconsin, this weekend.

“Fishing and participating in outdoors activities are challenging and exciting,” said Barb Carey, the founder of the Woman Ice Angler Project and Wisconsin Women Fish.

“By getting out of your comfort zones and doing things you never thought to do, you have adventures, learn lessons and gain confidence,” said Carey, who is the co-host of the Woman Angler and Adventurer podcast.

“There are many programs that get women to try it. But women need a community to continue fishing year by year,” Carey said. “We find it effective to build a supportive and positive network for women to learn, teach, have fun and engage with each other. In this community, everyone can have their place and gain a rewarding experience. The Fish Camp is a part of it.”

Becoming an Outdoors Woman, a program put on by the Michigan Department of Natural Resources, offers fishing classes for women in a “hands-on” way.

“We teach ice fishing in winter, fly fishing and lake fishing in summer,” said Michelle Zellar, the coordinator of the program.

“I believe the number of #fisHER will continue to grow and we are not going to slow it down any time soon,” Murray said with a laugh.