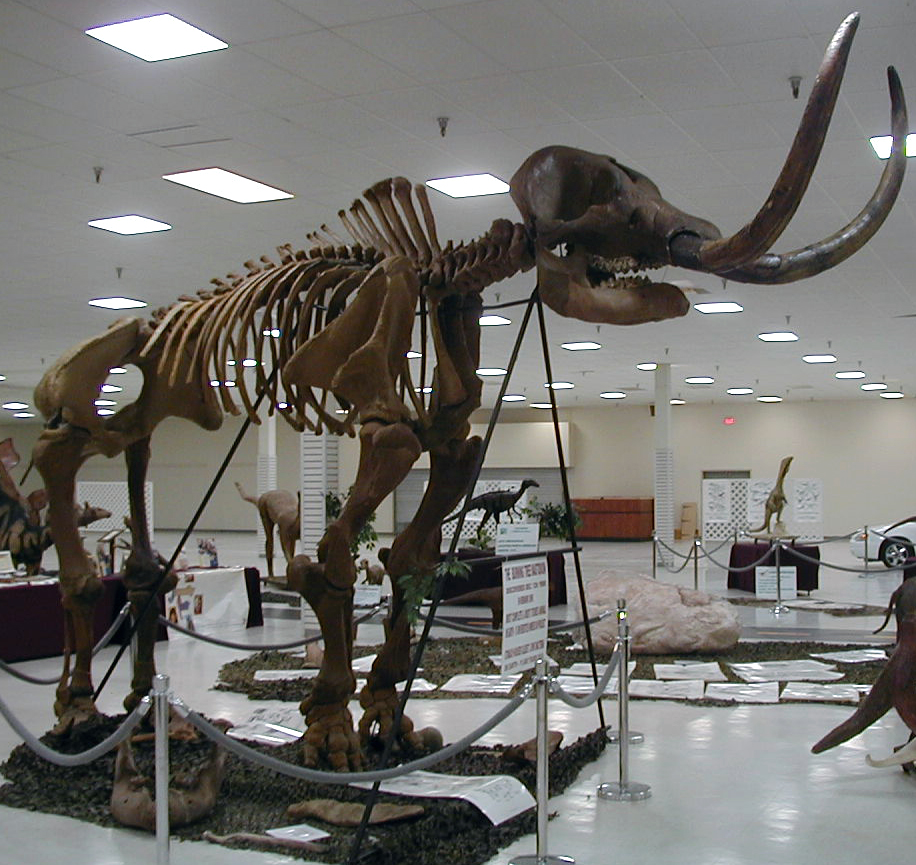 What did the Great Lakes region’s mastodons – those behemoth distant kinfolk of elephants – chow down on?

That’s according to a recent study of the intestinal contents of two mastodons preserved in lake sediments in Michigan and Ohio.

One was the Heisler mastodon, a young male whose fossil remains were found in Calhoun County’s Clarence Township, Michigan, in 1984. That discovery came when farmers were laying tile to improve drainage in a field.

The remains of the Burning Tree mastodon, a nearly full-grown male, were found in Licking County, Ohio, in 1989. That discovery came during excavation of a filled-in pond at a golf course. It’s the most complete mastodon skeleton recovered in the United States.

“Lakes were important water sources for mastodons,” which grazed in the sedge marshes surrounding the lakes, according to the study.

The fossils remains of hundreds of mastodons have been recovered in the Great Lakes region, the study said.

They two mastodons lived during the Pleistocene, a geological epoch that began about 2.6 million years ago and ended at the tail end of the most recent Ice Age about 11,700 years ago.

Mastodons went extinct an estimated 12,520 to 12,790 years ago, the study said, and new information about their diet could “shed light on the cause of its extinction.”

As the late J. Alan Holman, the curator of vertebrate paleontology at the Michigan State University Museum, wrote, “Several devastating episodes of extinction greatly changed the world from time to time, but none have affected humankind as much as the one that occurred during the Pleistocene Ice Age.

“This extinction knocked out the majority of large herbivorous mammals, most of the large carnivores that preyed upon them and even the mammalian and avian scavengers that cleaned up the carcasses,” Holman wrote in his book “In Quest of Great Lakes Ice Age Vertebrates.”

Experts offer several theories to explain the extinction, including climate change and human overhunting, according to Livescience.com. Another theory is that tuberculosis severely weakened the mastodons, and “coupled with the coming out of the Ice Age and fighting off humans, the species just couldn’t survive.”

Study co-author Eric Grimm of the University of Minnesota said mastodons “were doing absolutely fine until the beginning of the end of the Ice Age” when a series of disruptive climatic shifts occurred.

At about the same time, the Clovis culture – a prehistoric Paleo-Indian hunting culture – “expanded across North America,” Grimm said. That means a combination of climate change and hunting could have doomed the mastodons, Grimm said.

“There’s a lot we do not know,” Grimm said. “The mastodons have been around for a long time and gone through many different ice ages, climate changes. Then we have a sudden climate change with people – people were the new thing.

To learn what these two Ohio and Michigan mastodons ate shortly before their deaths, the U.S. Dutch and Norwegian scientists examined “intestinal contents” found with both sets of fossilized bones. In addition to spruce, the Burning Tree mastodon ate leaves and twigs from birches, pines, willows, ash, oak and hazel. However, the Heisler mastodon’s intestinal contents were overwhelmingly from spruce, the study said.

In addition to conifers and broad-leaf trees, they pulled up herbaceous plants from along the lakeshore, with their diets varying by season and location.

“It seems to be a varied diet,” Grimm said, noting that mastodons were browsers like deer, unlike their relatives the mammoths that were grazers living primarily on the Great Plains.

Mammoths and mastodons were the last large mammals to go extinct in North America.

“The overall question is what does this say about the future? A lot of what we’re doing is looking at what happened in the past, when you have climate change,” he said. “Megafauna extinction has always been a bit of a conundrum.”

The study appeared in the journal Quaternary Research.