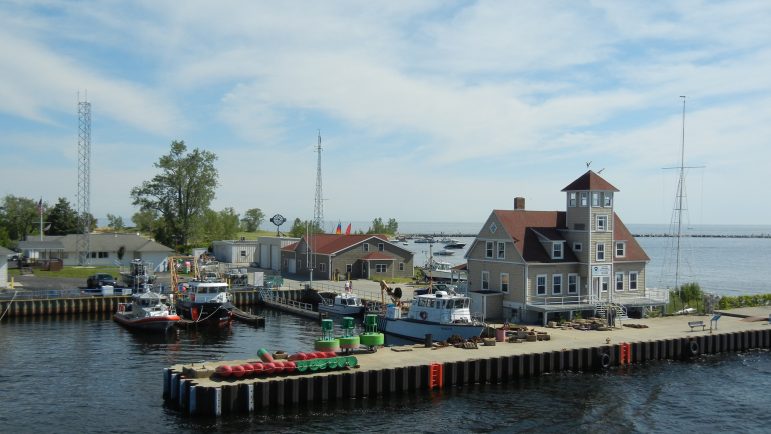 With the longest government shutdown in history behind them and the threat of another looming February 15, Great Lakes researchers are scrambling to catch up on their work and worried that yet another wrench will be thrown into it.

The fallout from the shutdown is mixed, said Bradley J. Cardinale, director of the Cooperative Institute for Great Lakes Research based in Ann Arbor. The institute is in an unusual position because it is a collaborative effort of the National Oceanic and Atmospheric Administration (NOAA) and 15 universities, nongovernmental organizations and private companies.

The universities could continue to gather much of the data used in NOAA’s forecasts of ice coverage of the Great Lakes and they could maintain buoys used to track harmful algal blooms in the summer and fall, Cardinale said. But because NOAA was closed, the agency’s ice forecasting models were shuttered.

That left an important record waiting to validate and update those models when the government reopened. Now researchers are scrambling to do that under the threat of yet another shutdown.

Updating the models “is going to be a several months process,” Cardinale said. That’s long after the shutdown deadline if the president and Congress can’t agree on a border wall.

“I haven’t thought about the fifteenth yet,” said Cardinale, now busy getting the institute back up to full speed. Even if he wanted to prepare for the next possible shutdown, he can’t.

“Our hands are tied,” he said.

But another shutdown could create “irreversible damage,” he said.

During the last shutdown, researchers were furloughed who normally monitor invasive Asian carp and try to keep them out of the Great Lakes. Lake current models that could predict the spread of a spill from the Enbridge oil pipeline between Michigan’s Upper and Lower peninsulas were unavailable on shuttered NOAA servers.

Another shutdown would have similar and also other less dire but still disruptive effects on the Great Lakes and Great Lakes researchers.

Some of the concerns caused by the first shutdown appear resolved. Chris Winslow, director of the Ohio Sea Grant College Program, had worried about missing a scheduled payment from NOAA to Sea Grant-supported research projects. Now he’s been told the funds will arrive late, but before February 15. Research in the contamination of drinking water, aquaculture disease and the effects of harmful algal blooms on fishing likely won’t be affected by that brief delay.

The Ohio Sea Grant also places graduate student fellows into federal agencies and legislative offices in Washington, D.C. That funding was also threatened by the shutdown but should be disbursed less than two weeks later than the fellows expected it.

Funding schedules aren’t the only things in limbo.

University researchers also rely on federal resources like boats, laboratories and buoys. They need to schedule their time with them well in advance.

The first shutdown already disrupted scheduling. A second shutdown might mean researchers can’t schedule their time with federal resources in time for this year’s projects.

Alan Steinman, the director of Grand Valley State University’s Robert B. Annis Water Resources Institute in Muskegon, is still unable to schedule what he needs for Great Lakes restoration research that he hopes to conduct this spring, summer and fall.

“We’re far enough away from the summer schedule, that there’s enough slack in there that we can be nimble about these things,” he said.

If the government shuts down again he’ll likely turn to projects funded by state or private funds.

“I don’t know if this is good or bad, but there’s so much work that needs to be done that we shouldn’t have any difficulty filling in the gaps,” he said.

And sometimes there are unexpected benefits. During the shutdown, Steinman temporarily gained a researcher who was furloughed from a federally funded Great Lakes Environmental Research Laboratory field station. He returned to the field station when the government reopened.

Will he come back to Annis? That’s up to the budget battle.

“Upon departing, he did say, ‘See you in three weeks,’” Steinman said.

This story was produced independently by Great Lakes Echo but with financial support from the Cooperative Institute of Great Lakes Research.