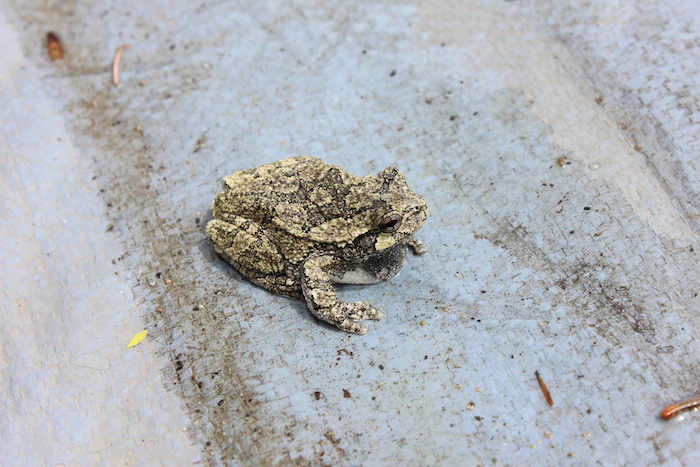 This frog, identified by David Mifsud as a gray treefrog, hung out briefly in the author’s backyard. Image: Karen Hopper Usher

Frogs are the night’s unseen musicians.

It’s a realization that hadn’t occurred to me until I pulled over next to a small mid-Michigan swamp. With the car silent and the lights switched off, I realized I’d been listening to a concert of frogs and toads all my life.

If you’d asked me before that day in early April, I would have said the chirping and the hums and the shrieks were coming from crickets or birds. Stevie Nicks had to get her inspiration from somewhere, right?

Frogs would have been on my list of possible noisemakers, but far down. I knew frogs made noise at night, but I didn’t realize how much or how many.

But I wasn’t out late that night for a frog concert.

I was there for science. Citizen science, actually.

The Michigan Frog and Toad Survey, now in its 22nd year, sends volunteers on routes of their choosing to the edges of the state’s various wetlands–from small ditches in the middle of a farmer’s field to big swamps in regional parks–to find frogs and toads.

Starting in early spring, volunteers trace their route of ten wetland sites. They visit the sites two more times that year, once in late spring and once in early summer. The survey’s coordinator asks volunteers to commit to at least three years.

It’s a listening tour, not a catch-and-release event. Most volunteers will never see a frog.

Instead, they pull their cars over, turn them off, roll down their windows and listen. They’re waiting to hear love songs from amphibians.

If they’re lucky, they’ll hear a chirp, a trill or a roar from a lusty male frog or toad serenading the dark. The male frogs are beckoning female frogs to leap (frogs leap, toads hop) their way.

The only requirement for survey volunteers is that they be able to hear high-pitched sounds.

When the volunteers do hear a frog or toad calling, they identify the call and try to gauge how many animals are making noise. Volunteers who sign up for the program can learn the frog calls online.

I definitely didn’t study enough, because I was totally lost when I joined a volunteer on her route in April. I would think I was hearing a whole new species when I was really hearing a chorus of the same species I’d heard one stop before.

Survey volunteers don’t have to learn the calls of all of the state’s frogs and toads.

There are 13 species of frogs and toads in Michigan, but there isn’t a single area in the state that has all of them, said Lori Sargent, a non-game wildlife biologist with the Michigan Department of Natural Resources. She started and runs the survey.

“The frog and toad survey is an outstanding tool,” said David Mifsud, a herpetologist who owns Herpetological Resource and Management, an environmental consulting company based in Michigan. He takes the volunteers’ data seriously.

In fact, the data goes into the Michigan Herpetological Atlas, which Mifsud’s company administers for the Department of Natural Resources.

The survey helps the department understand where frogs are doing well and where they’re dwindling.

Before I got in the car that night–the survey is supposed to start around dusk–I expected the most rural places would have lots of frogs, and the small wetlands in town wouldn’t have very many.

But it turns out, you can’t just look at a map to figure out where you’re going to hear frogs and toads.

I heard a robust chorus of spring peeper frogs next to a swamp nestled between an apartment complex and a busy highway. But another swamp just a short distance away, farther removed from the hustle and bustle, was silent that night.

But silence is part of the point. Volunteers are supposed to return, year in and year out, to the places they picked on their original route–even if it turned out to be a bust.

Briefly, I daydreamed about finding other survey volunteers, comparing notes on the best locations and cutting out all the silent zones for the purpose of a frog concert tour, but not for the survey.

Those silent places are important, too, after all.

The department uses the survey to look for evidence of the presence or absence of frogs and toads, Sargent said. It’s more like a screening. More and more silent nights in a certain area could mean it would be time for a university or other research group to find out why.

“We still have frogs and toads, and that’s outstanding” but there are places where they’re gone or only rugged species exist, Mifsud said. Some species are winning and some are losing.

Green frogs are expanding their range, Mifsud said. But cricket frogs, pickerel frogs and Fowler’s toads are declining or are uncommon.

A few weeks after I went out on the survey, I had myself convinced I’d found a Fowler’s toad.

I’d been paying closer attention to the nighttime sounds, and was eagerly waiting for frogs and toads to return to our backyard pool. I was determined to test my untalented ears and identify some frogs.

It was actually daytime the next time I heard something resembling a frog call. I walked the edge of the pool, backtracking each time the amphibian called out to me. Finally, I found him underneath a water bag that pins down the pool cover. But he looked different than last year’s frogs, which I was pretty sure were green frogs. I snapped a picture and compared him to the pictures on herprman.com, Mifsud’s company’s website.

The frog or toad was stout, had a rounder body and mottled skin. Had I just found a Fowler’s toad? The little fellow had stopped making noise–Hopper may be my middle name, but I guess I wasn’t his type–so I couldn’t record his call for comparison to the Department of Natural Resource’s recordings of frog and toad calls. Instead, I emailed the picture to Mifsud.

While I waited for his reply, I started worrying about my responsibility to the toad. Did we need to mow more? Less? Would opening the pool hurt him? I liked the idea of finding an uncommon critter but I hated the idea of being an inadequate steward of the land he needed to survive.

In the end, I worried for nothing. Mifsud told me I didn’t have a toad at all, and certainly not a Fowler’s toad. Instead, I’d found a gray treefrog. And he’d long-since leaped away.