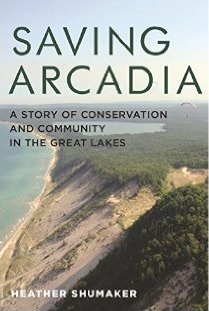 For Michiganders, going “up north” is a common answer to questions about upcoming vacation plans – and for good reason.

That region holds Michigan’s dunes–landforms integral to the state’s history and tourism. They also hold stories of grassroots advocates and volunteers who successfully preserve these pristine landscapes.

Heather Shumaker, author of “Saving Arcadia: A Story of Conservation and Community in the Great Lakes,” explores the near 40-year battle between Arcadia Dune conservationists and CMS Energy, the holding company of Consumers Energy, a natural gas and electric public utility provider.

Located along Lake Michigan’s coastline and almost directly across from Wisconsin’s Green Bay, the Arcadia Dune’s conservation story begins in 1969. Elaine Putney, an orchard farmer, received a knock on her door from a sharply dressed man. The man, Gerald Derks, was offering to buy land from Benzie County residents on behalf of Viking Land Co., which as it would later turn out  represented Consumers Power Co.

Consumers quietly acquired several hundred acres of lakefront property in Benzie and neighboring Manistee County, intending to construct a massive water reservoir on the land. The Putneys were the final holdouts. They were faced with two unwanted choices: sell their land or have it seized through eminent domain. They chose to sell.

That could have been the end of Arcadia’s dunes, but they remained untouched for several years–a pause that would allow parties across the Arcadia region to organize a defense of these lands.

In the author’s note section, right at the beginning of the book, Shumaker honors the 5,000 people “who contributed to saving Arcadia.” Shumaker herself is among that crowd.

Her direct involvement in Arcadia is a story that has much to do with her upbringing. 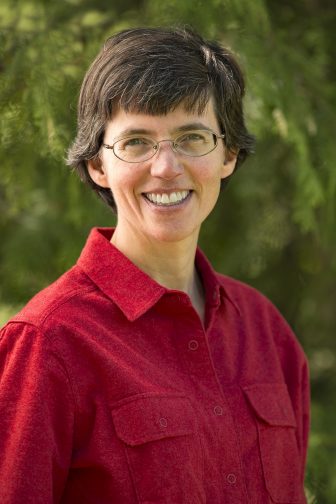 “I was told as a 6-year-old that you had to hike one mile for every year old you were. That lasted for a number of years,” she said. Growing up in Ohio, most of these hiking trips took place in the Hocking Hills region.

“My parents, particularly my father, got very playful outside. Out in the woods doing lots of balancing on logs or fun games, and it just made the outside a wonderful place to be.”

This early passion for the outdoors drove Shumaker to pursue a master’s degree in land resources and eventually to her new home in Michigan.

After receiving her diploma from the University of Wisconsin-Madison, Shumaker came across an opening for a land protection specialist job through the Grand Traverse Regional Land Conservancy, based in Traverse City, Michigan.

Flipping through a plat book–a spiral-ring notebook which contained the names of landowners in the county–Shumaker noticed the disproportionate amount of land owned by CMS Energy.

“I thought, ‘Wow, who is this that owns all this land?’ It was miles and miles of land.”

She asked Glen Chown, the founder and director of the conservancy.

“Well, you’re only seeing half of it,” Chown said. “The other half of this large ownership goes into the next county.”

Chown assigned Shumaker the title of coastal programing director, since much of the conservancy’s projects ended up focusing on the Arcadia region. From 1998 through 2010, Shumaker helped coordinate groups to advocate for the dunes’ protection.

The big play to protect Arcadia involved buying the land from CMS Energy to become its stewards. To do this, advocates petitioned the Mott Foundation to buy the shoreline and dunes region and for the W. K. Kellogg Foundation to take up the surrounding farmland.

A frantic summer of fundraising in 2003 raised several million dollars and convinced both organizations to give generous grants to hit the $5 million goal, a figure CMS Energy demanded to prove the conservancy could actually reach the full $18 million deal.

Even after the deal was struck, the conservancy still had to fight over CMS Energy’s utility easements over the land since the company could and had been logging the land in the meantime.

The task took another seven years and ended with a victory for the conservancy when it became the owner and steward  of the land. In 2010, Shumaker willingly stepped down, proud of what she accomplished and leaving the task of managing the land to the conservancy.

Shumaker listed characters in the book’s index representing organizations from the conservancy, to CMS Energy, to the office of Gov. Jennifer Granholm. However, Shumaker said the real trick in making this campaign successful was tapping into Michiganders’ deep love and appreciation for Arcadia and nature.

“The people we were drawing on for fundraising all had grown up in an era where you were outside, so we were just connecting to the heart of what was already there.”

“Saving Arcadia” is available through Wayne State University Press for $22.99.