The water drama that has become “Waukesha” is nearing an end.

Great Lakes governors are slated to vote on the Wisconsin city’s request for Lake Michigan water on June 21st in Chicago.

The table was set to approve that request last month when an advisory group designated by the governors and Canadian premiers finished a protracted and rigorous review of Waukesha’s request.

They attached a couple of important conditions to the request, which Wisconsin accepted, then voted 9-0 to recommend approval. A dawdling Minnesota abstained.

That should be it.

The goal is to “provide a long term solution for Waukesha’s residents” and be true to the letter and spirit of the compact, New York’s Don Selazny told me at a meeting of the regional representatives.  Selazny is one of the group that voted in favor of Waukesha’s request.

The compact is the landmark agreement between the eight states designed to keep water in the basin and govern the few diversions it may allow.

A yes vote by the governors should be a fait accompli if reliance on facts, the law and logic is the basis for a decision.

But some folks aren’t happy with the way things appear to be headed.

While they compromised in 2008 by supporting the compact they are unwilling to compromise now.

A coalition of environmental groups is “disappointed” that the governors and premiers group didn’t “completely reject Waukesha’s flawed diversion proposal.”

The regional group of U.S. and Canadian mayors opposes the diversion too. In a statement on its website, the Great Lakes and St. Lawrence Cities Initiative says it fears approving a Waukesha diversion would “become the door through which Great Lakes water is taken away and sold to many regions of this country, or even abroad.”

They called it “an attempt to pillage our magnificent Lakes” and asked him to “do the right thing.”

“Pillage” sounds like a Waukesha approval would permit hordes of water-sucking tankers from Arizona to advance on Lake Michigan, like there’s a pipeline to California attached to Lake Superior waiting to be switched on.

Reps. Dingell and Miller should spare us the ill-informed hyperbole and drop the drama.

Cheap political pandering on an issue where they have demonstrated little expertise and have no legislative responsibility is not needed and denigrates the hard work the states have done.  In fact, the states decided on an interstate compact as the governing document specifically to keep diversion issues out of the control of the D.C. politicians. 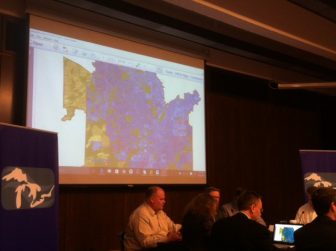 Miller voted in 2008 to approve the compact. Debbie Dingell was not in the House in 2008. Neither Dingell or Miller have a vote on Waukesha’s request.

The Great Lakes region has an opportunity to demonstrate what good water governance looks like by approving Waukesha’s request.

As unpopular as it may be on an emotional level – no one wants Great Lakes water to leave even when it’s treated and returned — Waukesha’s request complies with the law.

That’s the law based on the agreement signed in 2005 by eight bi-partisan Great Lakes governors and accompanied by a similar law in Canada. It’s the law easily passed by Congress and signed by the president in 2008.

It is the same law that was enthusiastically supported by environmental groups and business interests and heralded as proof of the value of regional collaboration. It is the law that fueled countless celebrating success victory laps at conferences.

I suspect there will be last minute pressure on the governors to nix the Waukesha request; witness the Dingell / Miller letter.

There’s still time for the region to snatch defeat from the jaws of victory.

That would be a mistake.

The rigorous work to make sure Waukesha’s request is compact-compliant has been done and it is.

Waukesha is a mere puddle of an issue to take a stand on compared to other Great Lakes problems such as the disasters of Lake Erie water quality and the Flint water crisis.

The anti-Waukesha crowd should channel its resources in issues like those, not in trying to deny an unsympathetic but needy suburb basic drinking water.

It’s time to tell the governors to approve Waukesha’s request, declare victory and move on.