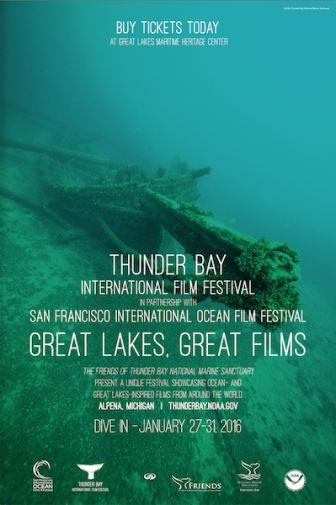 A film documenting the discovery of three Lake Huron shipwrecks will be among those shown at the fourth-annual Thunder Bay International Film Festival, which opens this week in Alpena, Michigan.

The film fest’s theme — “we impact oceans and oceans impact us” — will be reiterated in over 30 films, including nearly a dozen on the Great Lakes, said Stephanie Gandulla, maritime archaeologist and film festival coordinator.

Whether navigating barricades of Great Lakes ice in “Cutter Rescues,” preserving the legacy of lost crew members in “The Edmund Fitzgerald: A 40-Year Legend” or traversing Lake Michigan by stand-up paddleboard in “Protecting the Great Lakes,” the Great Lakes produce great visual stories.

Alpena’s film fest will also host the world premier of a Swedish documentary — “Mars the Magnificent” — on Saturday. It follows the exploration of a large wooden ship destined for the seafloor after it and 800 soldiers sunk during the first “modern” naval battle in 1563.

The filmmakers and underwater explorers were inspired by Thunder Bay, visiting the sanctuary to learn about its programs and how it incorporates community outreach.

“The southeast shores of Sweden have a similar maritime cultural landscape to the one here in Alpena. The cold and nearly freshwater, brackish Baltic Sea is a great preservation environment for sunken ships. They’ve got hundreds like we do,” she said.

Films like “Mars” and others will provide post-showing opportunities to ask questions of filmmakers and production staff. Saturday’s events will also include a focused filmmakers panel in the morning and fish biology panel in the afternoon. Local-area teachers and students will lead the Sunday afternoon panel on curbing plastics pollution.

Other film festival events include a “Sanctuary Sneak Peak” at Thunder Bay Winery in downtown Alpena on Wednesday, “Shark Night” at Thunder Bay Theatre on Thursday and a wrap-up party on Sunday at Black Sheep Pub.

Events on Wednesday are free and open to the public, with a portion of wine sales going to the Friends of Thunder Bay National Marine Sanctuary. Thursday’s events will be held at the Thunder Bay Theatre with tickets available for $10.

Full festival passes can be purchased at a discount.