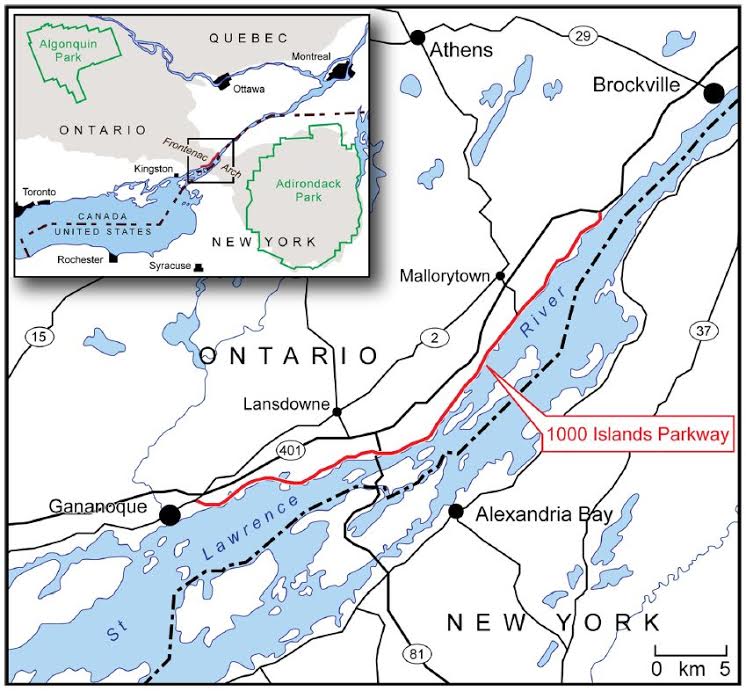 Nobody claims environmental research is easy — or always pleasant-smelling.

Even bicycle up and down a highway to count roadkill.

That was a key part of four years of research along the 1000 Islands Parkway adjacent to the St. Lawrence River by a team from the Canadian Wildlife Service, Carleton University in Ottawa and Queen’s University in Kingston, Ontario, with assistance from Parks Canada.

Their mission: tally how many vertebrates get killed by vehicles along the 23-mile (37 km) highway that bisects the Algonquin-to-Adirondacks international conservation corridor between Gananoque and Brockville.

“Strategies to reduce wildlife road mortality have become a significant component of many conservation efforts,” they wrote in their recently published study.

The study is based on 209 bicycle surveys from 2008 through 2011. It estimates 16,700 vertebrates — 75 a day — are killed annually along the two-lane parkway April through October, the period when they are most active. Researchers didn’t estimate annual bird and mammal death tolls because they’re killed on the parkway year-round.

Turtles and snakes are in the greatest peril, and the Canadian government has designated four of the five turtle species living in the parkway area as at risk.

The estimated annual loss of 167 turtles, most of them adult females, is apt to lead to a population decline over time, the state said, with a similar negative impact on snakes. Three of the nine snake species in the parkway area also are at risk.

The parkway has wetlands and open water along its south side and forested areas along its north. The speed limit is 50 mph (80 kph), and an estimated 1,500-4,000 vehicles use it daily.

The “hot spots” for roadkill along the parkway varied by species and year. Most hot spots are where wildlife habitat is close to or straddles a road.

The project used bicycles because walking wasn’t feasible and surveys by car “tend to underestimate road kill, especially for small-bodied animals such as reptiles and amphibians,” the study said.

“I really liked the scale in terms of the speed and the ability to observe that a bicycle provided versus a car versus walking to cover that kind of distance,” he said

Eberhardt said the survey attracted a lot of local attention and public interest. At a pub in Brockport, for example, “people were talking at the bar about the study” and there was local TV and newspaper coverage.

“There was a lot of talk about it because it was something people could connect with literally,” he said. “People don’t like hitting animals.”

The study said, “The information can be used to inform mitigation strategies with implications for conservation at regional scales.”

“Mitigating wildlife road mortality on the parkway is important for biodiversity conservation, not only at a local scale but also at regional and even continental scales,” the study said.

A 2013 study by Eberhardt and two Carleton College professors found that areas with small amounts of roadkill may not be safe for wildlife because traffic may already have reduced their population. Therefore, selecting sites for mitigation efforts based only on high road kill statistics may ignore such stretches of road areas.