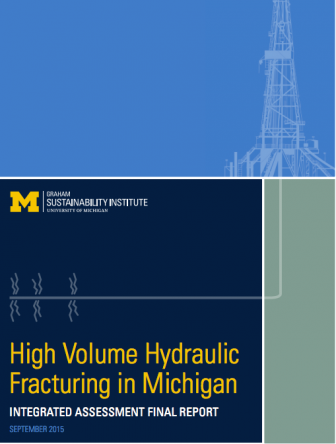 A new report breaks down what’s up with fracking.

The University of Michigan recently released a report addressing policy options for high-volume fracturing–underground injections of at least 100,000 gallons of chemicals, sand and water to extract natural gas.

The multi-million dollar question? If gas prices go up will fracking increase?

Researchers at the Graham Sustainability Institute at the University of Michigan analyzed a variety of policy options. But they refrained from recommending a course of action.

They explored options like requiring the Michigan Department of Natural Resources to respond to public comments about state land lease proposals for hydraulic fracturing. Another would call on the state’s Department of Environmental Quality to hear local concerns about fracking if a lease was approved. The state requires no such public input periods.

It accounts for only a couple dozen projects within the state, said John Callewaert, the Graham institute’s integrated assessment manager.

But his team’s report addresses outcomes if the process were to spike in popularity.

“They made more in that one-day auction than they made in previous decades,” Callewaert said.

Many of these purchases have yet to result in drilling, he said. But the report addresses the “what ifs” and public concerns if drilling began.

“We wanted more clear opportunities for folks to know about the process and also offer input,” Callewaert said.

That was also the DEQ’s goal when it recently adopted regulations that increase the public’s awareness of how chemicals are used and water consumed during high-volume fracturing.

The report further dug into ways to increase the public’s access to the fracking “unknowns.”

One option is for companies to publish information on FracFocus, a website that discloses chemical usage on a public registry.

More people want this information and not just scientists and environmentalists, Callewaert said. “Even companies want to share this information so they’re not questioned constantly. It’s really about more transparency from multiple sectors.”

The Michigan Oil and Gas Association presented a more negative assessment on the report’s findings, Callewaert said. Erin McDonough, president of the group, said expansion on the Collingwood and Utica shales won’t happen for years. She called the report “overly pessimistic about the industry’s future prospects in the state.”

While the finished report “does not recommend any specific course of action, it offers valuable input that can help Michigan regulators improve the state’s oversight of fracking,” MEC wrote in their analysis.

Researchers also analyzed fracking policies elsewhere, such as high-volume hydraulic fracturing moratoriums like those in New York and Maryland.

A ban would be a comprehensive way to address all of the concerns, Callewaert said, but it would cost revenue for mineral rights owners and from the sale of drilling rights on public lands.
Organizers of a proposal to ban fracturing in the state recently acknowledged falling far short in gather the necessary signatures to put the issue on the 2016 statewide ballot.
Even so, the Committee to Ban Fracking in Michigan said a poll earlier this month showed that 59 percent of state residents want a ban on fracking and frack wastes, and 66 percent want to ban frack waste in Michigan.
The committee’s petition drives also failed to secure enough voter signatures for the 2012 and 2014 elections.
Callewaert said a ban could unfairly force mineral rights owners to give up potential income produced from their own property.

You can find the full report here.