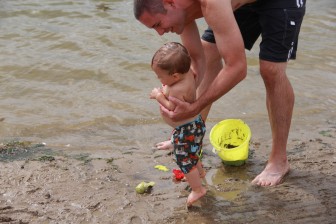 A young boy plays in the surf at a beach in Michigan’s Sleepy Hollow State Park.
Image: Kailiang Li

Drowning is the second leading cause of accidental death for children under 14, and swimming lessons and water wings aren’t cutting it, according to a Michigan-based water safety group.

“Most people don’t really understand the need for water safety at the moment,” said Dave Benjamin, executive director of project management at the Great Lakes Surf Rescue Project, which teaches students about water safety at schools throughout the region.

A recent Red Cross survey found that 61 percent of children lack basic swim safety skills that would save their lives in a drowning situation. Those are skills like treading water for more than a minute or calmly locating a shore or pool ladder.

“People don’t understand that even if they or their child know how to swim, they might not have those basic swimming abilities to save their own lives in the water,” Benjamin said.

Surf Rescue has held 72 school presentations in six of the eight Great Lakes states this year, and more than 100 since starting the program in 2012. More are in the works for when school is back in session in the fall.

The group works with students from kindergarteners to high school seniors, covering topics that include how to spot a distressed swimmer, recognize dangerous currents and use safety devices like throw rings.

“For our elementary students, we keep it fun, we keep it entertaining,” said Bob Pratt, Surf Rescue’s executive director of education who runs many of the school presentations.

Rather than preach a list of rules, Pratt said that he takes a different approach with older students, explaining the risks and rewards involved in dangerous activities like pier jumping. Giving them this kind of information allows students to make up their own minds.

“They are going to take risks, they are going to make choices that are less safe, and I think it’s important that we empower them to recognize that there are choices,” said Pratt, a retired firefighter who has taught safety education for more than 15 years. “I think the kids are very receptive to us giving them information in a way that they can use that information, rather than just simply preaching to them don’t do this, or don’t do that.”

Individual schools need to do more to encourage water safety, Benjamin said. He encourages districts to further invest in water safety, giving it the same importance as fire and severe weather drills.

“It’s time for water safety to be taken up to the same level as the other safety measures that are in schools,” he said. “When we look at the statistics from the Centers for Disease Control, we’ll see that more school aged children are going to die drowning each year than die in fires, tornadoes and earthquakes combined.”

More than 700 children drown each year, according to the Centers for Disease Control and Prevention.

Drowning comes second only to car accidents in unintentional death for children one to fourteen, and is the leading cause of accidental death for those four and under.

“If we want to get to the largest audience in the shortest amount of time, a water safety school curriculum is the fastest method,” Benjamin said. “And, at the same time, you can get educational materials to parents, and the teachers and faculty at the school.”

Implementing such a curriculum is largely up to individual districts, said Linda Forward, director of Michigan Department of Education’s Office of Improvement and Innovation.

“Whether this is adopted by districts is strictly up to them,” she said. “Certainly, we want our kids to be safe, and want them to know and understand things like water safety.”

Every day, an average of 10 people in the U.S. drown, at least two of whom are children under 14, according to a CDC fact sheet. For every child that drowns, another five receive emergency care for submersion injuries, which can range from hypothermia to severe brain damage.

“It really needs to get more core attention, so we can make a dent in those numbers,” Pratt said.