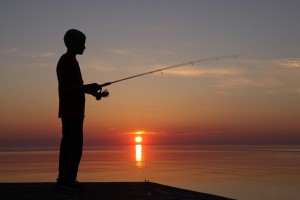 Health authorities in New York, Michigan and Minnesota are waiting for the results of tests for elevated levels of chemicals and metals in people who eat lots of Great Lakes fish.

Blood and urine from volunteers were tested for PCBs, pesticides, mercury, lead and cadmium, according to the New York Department of Community Health.

Each state focused on a community. Michigan tested anglers along the Detroit River and Saginaw Bay. Minnesota tested the Ojibwe tribe near Lake Superior. New York tested licensed anglers and Burmese refugees and immigrants along the Buffalo River, Niagara River, Eighteenmile Creek and the Rochester Embayment on Lake Ontario, according to the Agency for Toxic Substances and Disease Registry, which facilitated the project.

These populations were chosen because of their heavy dependence on fish for food, said Phil DeFoe, biomonitoring project manager for the Ojibwe tribe.

The three-state program is part of an attempt by the federally-funded Great Lakes Restoration Initiative to find out how chemical and metal levels in people who eat lots of fish compare to the national average.

“Nothing has ever been done as far as I know with tribes and levels of environmental contaminants and this was an opportunity for both entities to do something and get baseline data,” DeFoe said. “Since we are so dependent on our environment for fish and hunting, this will be extremely useful.”

While all of the results are not back, increased levels of mercury have been already found in Michigan participants.

“The average blood mercury levels in our participants that eat a lot of fish are about three times the average published in the National Health and Nutrition survey of the Center for Disease Control,” said Linda Dykema, Michigan’s director of environmental health.

Those who volunteered in Michigan’s study were mostly males. But if women of childbearing age have similar numbers, there could be cause for concern for children they give birth to, Dykema said.

The news isn’t all bad.

Mercury and lead in Minnesota fisheaters were lower than the U.S. and Canadian averages, DeFoe said.

DeFoe said he believes the different results could be due to some major differences in sizes of the lakes tested and the closer proximity of lakes tested in Michigan to industrial communities where pollution is more likely.

“We tested the lake that had the highest levels of fish consumption,” DeFoe said. “If that lake would have been the St. Louis River, those are the people who would have shown higher levels of contaminants. Most people are educated and know which lakes are safer to get their fish from.”

To participate in Michigan’s study you had to be 18 years or older and eat more than two meals of fish from the Great Lakes each month, Dykema said. Participants averaged 11 meals of fish per month. Testing began for all three states in January 2013.

The Minnesota Health Department tested 491 members of the Ojibwa tribe. It was the only study in which the tribe owned the data and was in charge of how the research was done, DeFoe said.

In New York, participants had to be 18 and older, have a New York State fishing license and eat fish caught in the Great Lakes.

What started in 2010 as a three-year project got repeatedly pushed back and has now become a five-year project, Dykema said.

“We started our fieldwork in the Spring 2013,” Dykema said. “We do not have all of the data back from the laboratories yet.”

The New York Department of Community Health tested 600 anglers between February and October of 2013, said Jeffrey Hammond, the agency’s public affairs officer. The results will be available in late 2014 or early 2015.

“The first step is to let participants know what their levels of each thing are and how they compare to the national average,” Dykema said.

There is no official level of these contaminants that makes a person sick, she said. The department would counsel people on how to make better choices on fish consumption.

The latest advisories on fish consumption in New York can be found on the state Department of Environmental Conservation website.

The Ojibwa tribe in Minnesota has similar plans.

“The biggest thing for us is coming up with an action plan and educating our members,” DeFoe said. “All we have to go on is our blood levels and our biggest message right now is to eat fish but safely and abide by the health department and tribe fish advisories.”