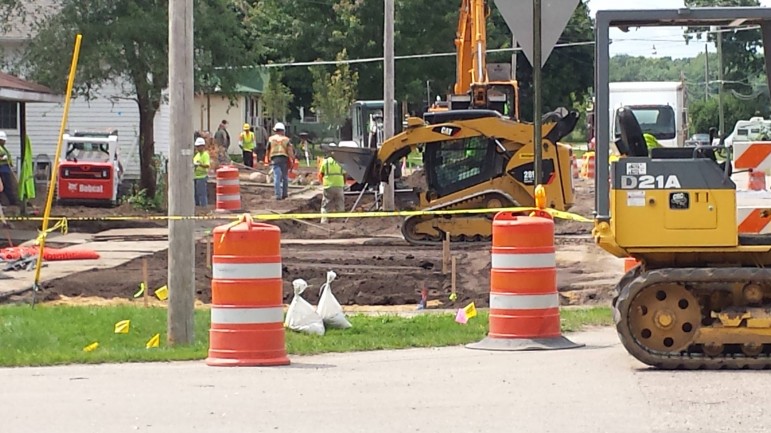 The air near a mid-Michigan chemical plant that was closed for cleanup nearly 40 years ago because it threatened the environment remains contaminated with chemicals even today, according to a recent Indiana University study.

The study, published Sept. 11 in Environmental Science and Technology, concludes that people living within six miles of the 54-acre former site of the Velsicol Chemical Co. “are still being subject to relatively high levels of HBB, PBBs, and DDTs in the air they breathe.”

Those are among the chemicals that prompted federal regulators to designate the chemical factory in St. Louis, Mich. a Superfund site in 1982. The cleanup of that site, the nearby Pine River and the city itself has cost millions of dollars and continues today.

“People can’t control what they breathe,” said Angela Peverly, lead author on the study, explaining the significance of the research.

The study does not conclude if the air contamination can cause immediate or long-term harm to human health.   It could heighten awareness of the contamination and possibly encourage outside help to assess that health threat, said Marcus Cheatham, health officer for the Mid-Michigan District Health Department, which serves Clinton, Gratiot and Montcalm counties.

The health agency is looking for a definitive dangerous threshold of contamination in humans so it can educate the people of St. Louis about what medical tests are needed and at what levels they should be performed, Cheatham said.

The Indiana researchers tested for an alphabet soup of chemicals that the Velsicol plant used to produce. DDT is the pesticide dichlorodiphenyltrichloroethane. PBB refers to the fire retardant polybrominated biphenyls. And HBB is hexabromobiphenyl, a chemical related to PBB. For comparison, they also tested for other chemicals not produced by Velsicol. 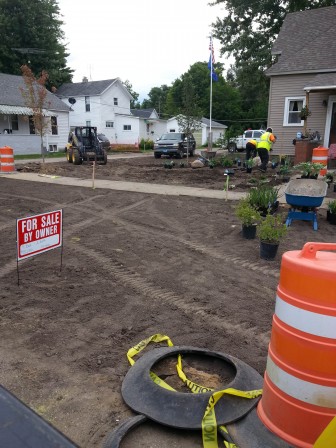 Some St. Louis residents put their house up for sale. Image: Dan Childs

“Clearly, the levels of HBB, DDT, and PBBs are elevated close to the manufacturing site with a sharp decrease” after six miles, the study reports.

To assess air quality, Peverly studied tree bark surrounding the Velsicol site. Bark gives an accurate measurement of atmospheric conditions over three to 10 years, the amount of time the bark is on the tree, she said.

Researchers collected 43 bark samples throughout central Michigan. The large sample area allowed them to check for patterns of concentrations.   They tested three different trees at each site.

The study found that concentrations of DDT, banned in the United States in 1972, are about 18 times higher in bark collected near the Velsicol site than that collected more than a half of a mile from it.

According to the Centers for Disease Control and Prevention, exposure to DDT “could possibly cause cancer in humans.” Less severe effects of DDT exposure include headache, dizziness, nausea, vomiting, and tremors, with symptoms subsiding once exposure has ended.

The U.S. Environmental Protection Agency is now overseeing the replacement of DDT-contaminated soil in nearly 100 residential yards in St. Louis. Cleanup experts believe that wind blew much of that contamination from the nearby factory site to the yards before the site was cleaned up. That cleanup was sparked in part by the discovery of birds that died from exposure to DDT.

Concentrations of PBB were at least 100 times higher in bark within a half of a mile of the site than in bark 60 miles away, the study reported.

HBB concentrations were about 150 times greater within a half of a mile of the site than those farther away.

PBB exposure has been linked to a number of different health problems, but it cannot be fully established that PBB is the sole cause of these health issues, according to the Agency for Toxic Substances and Disease Registry, a federal public health agency.

According to the agency, “If you breathe air that contains PBBs, or swallow food, water, or soil contaminated with PBBs, they can enter your body through your lungs and stomach and pass into the bloodstream.” However, very little is known about the health of people who are exposed to low levels of PBBs for long periods by eating, breathing, or skin contact.

Jane Keon, secretary of the Pine River Superfund Citizen Task Force, said that even if the highest DDT concentration found in the bark does not affect people, the ecological effects of it are unknown.

The EPA has been removing trees from the town as part of the cleanup and offering the wood from the trees as firewood, she said. In her opinion the agency should stop giving the wood away as firewood.

Instead, the trees should be burned in an incinerator or buried in a hazardous waste disposal area, she said.

The EPA did not respond to numerous requests for comment.

According to the researchers, this is the first published study concerning air quality around the Velsicol Superfund site. In 2000, the EPA monitored air quality during attempts to remove contamination but the EPA did not release the data.

The study suggests that there should be air monitoring of all Superfund cleanup sites, especially those sites requiring soil remediation, Peverly said.

A History of Contamination

In 1973, two chemicals produced at the then-Michigan Chemical Corp. were accidentally switched. The PBB fire retardant was mislabeled as magnesium oxide, a mineral intended for use as a nutritional additive for dairy cow and other livestock feed.

As a result, PBB was added to livestock feed, causing widespread contamination of cows and other livestock. The contamination exposed the public to PBBs through meat and milk. When the accident was discovered, thousands of animals were slaughtered.

Following the accident, state regulators investigated the plant.  It had stopped PBB production in 1974. Michigan Chemical merged with Velsicol in 1976 and Velsicol closed the plant in 1978.

In 1982, the EPA reported heavy contamination of PBB, DDT, and HBB at the site.  Velsicol, the state of Michigan and the EPA entered into an agreement that Velsicol remove contaminated soil, construct a slurry wall around the former plant site and put a clay cap over it to contain remaining chemicals.

The former chemical plant was designated a Superfund site, which according to the EPA, is an uncontrolled site containing hazardous waste that can affect local people or ecosystems. The designation also makes it eligible for federal cleanup fund.

Later, regulators discovered that the slurry wall leaked and that the  sediments in the nearby Pine River, which borders the former plant site, were heavily contaminated. In 1998, the EPA began clean up of the Pine River, a process that cost more than $100 million until it was finished in 2006.

Contamination of the fish in the river dramatically dropped, but a 1982 no consumption warning for all species of fish remains in effect.