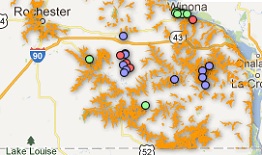 The Minnesota Court of Appeals has upheld a Winona County decision that no environmental impact statement is needed for a controversial frac sand mining project already operating in Saratoga Township.

Jay Squires, a Minneapolis lawyer representing the county, said the ruling could have implications for similar disputes in the state. Unlike Wisconsin, he said, “we’ve not had too many silica sand decisions.”

A lawyer for the challengers, James Peters of Glenwood, Minn., said, It’s “a discouraging case for citizens.”

He said his clients have until mid-July to decide whether to seek state Supreme Court review.

In 2011, site owners David and Sherry Nisbit applied to the county board of commissioners for a conditional use permit for a 19.1-acre silica sand mining project to be located in the middle of 74 acres of farmland. It would excavate 700,000 cubic yards of soil and involve up to 280 truck trips daily. Sand would be washed and processed locally, and most of it would be shipped out of state for use as a proppant for hydraulic fracturing.

There are now six active silica sand washing and/or load out facilities in the county that buy sand from approved and active mines in Wisconsin, the court said in a unanimous ruling.

Winona County, in the southeastern part of the state, borders Wisconsin. Mining would end after two to three years and the site reclaimed and restored as grassland. After receiving the application, the board imposed a moratorium on permit applications to allow a full study of possible environmental effects of silica sand mining.

In May 2012, the county lifted the moratorium and the 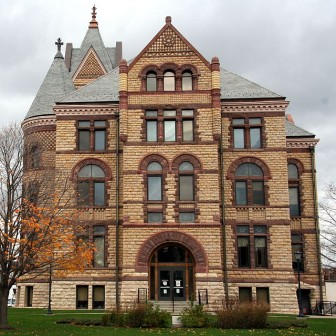 Nisbits reapplied for a permit. In August 2012, the county planning commission held a hearing, received public comments and reviewed conditions recommended by the planning department to address such matters as dust control, noise and traffic. The commission recommended that the board approve the permit with conditions.

The board then prepared an environmental assessment worksheet. After further proceedings and review, including another public hearing, it concluded that no environmental impact statement was required — technically called a “negative declaration” — and granted the permit, which requires the project to comply with 39 conditions.

At the time of the approval, Minnesota Public Radio quoted the chief operating officer of IT Sands LLC, the Nisbits’ mining partner, as saying, “Basically all I’m doing is lowering a hill and putting it back to prairie again. When it’s completed and trees have grown, people will never even know where it was.”

Some local residents concerned about potential environmental effects of the proposed silica sand mining project sued the board, the Nisbits and the chief operating officer of IT Sands LLC. They challenged the board’s decisions not to order an environmental impact statement and to grant the permit as arbitrary, capricious and unsupported by evidence. The challengers contended that the project could cause significant environmental effects because increased traffic will result in more noise, dust, emission, and adverse health effects for residents along the trucking route.

In rejecting the challenge, the appeals court said the board “properly considered the type, extent and reversibility of potential environmental effects before making a negative declaration on the need for an environmental impact statement.

The court detailed a four-part test for a local government to determine whether a project’s “cumulative potential effects” will have significant negative environmental effects:

The court found sufficient evidence that the board adequately considered each factor and quoted the board’s statement that the mine “is a small and isolated 19.1-acre site, not associated with any other silica sand mining and/or processing projects that have been proposed and considered by the board in the past.”

It said, “Substantial evidence in the record supports its finding that the potential cumulative effect of this small and limited-duration project is minimal.”

The court also said the board considered the fact that there were two other permit applications pending in the county, both subject to environmental impact statements, and added that it’s speculative when and whether they may be in operation.

“It is possible that other mining projects are proposed within Winona County but the exact location, plans and details are unknown and cannot be reliably predicted due to proprietary economics and permitting,” it said. Other sites “are at various stages of planning, but the record does not indicate when these operations are reasonably likely to occur. None of these proposed projects have received the requisite permit to operate a mining operation; they are in various stages of environmental review and subject to financial viability.”

On a related topic, the court noted that the county board had found that the Nisbits’ other issues reviewed by the board included water use, noise, air quality, mitigation of any adverse impacts, storm runoff and concerns about creation of sinkholes.

“Although the project may have some effects on the environment, we conclude that there is substantial evidence in the record to show that the county identified specific and targeted measures that will mitigate these environmental effects,” the court said.

It also said the project is related to the county’s overall needs, including tax revenue from the mined sand and protection of agricultural lands by limiting nonagricultural development. And although the project will increase traffic, an impact analysis concluded that it won’t cause traffic hazards or congestion, it said.

“We are aware that the issues involved in this case stir the passions of many people, but our role is limited to faithfully applying the law, whether or not that decision is popular,” the court said.