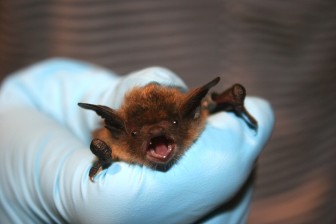 A fungus that has already killed more than 10 million bats nationwide has been found for the first time in Michigan.

White-nose syndrome was confirmed April 10 in little brown bats in Alpena, Dickinson and Mackinac counties. It is expected to spread quickly through the state, said Bill Scullon, wildlife biologist and statewide bat coordinator for the Department of Natural Resources.

The bats were found during a routine winter inspection done by researchers contracted by the department.

Michigan farmers, foresters and homeowners count on bats as the primary predators of nighttime insects. Each bat can eat 2,000 to 5,000 insects in a single night, said Rob Mies, executive director of the Organization for Bat Conservation at the Cranbrook Institute of Science in Bloomfield Hills.

“These bats are known for eating forest and cucumber beetles, tomato hornworm moths and corn earworm moths, which could really harm crops if they got out of hand,” Mies said. “They also eat emerald ash borer beetles that destroy all ash trees.”

Some places have seen the white-nose fungus kill 90 percent of little brown bats, which is what Michigan could see in the next couple years, Mies said. “Bats mate only once a year so it will probably be centuries until we have a normal bat population again.”

“If bats can no longer eat these insects that are pests to agricultural crops and commercial forests, we expect them to do an increased amount of damage and a potentially substantial economic impact,” said Dan O’Brien, wildlife veterinarian at the Department of Natural Resources. “Bats haven’t been studied a lot so we don’t even know all of the other ways they interact with other species or what subtle ecological effects to expect.”

Michigan Farm Bureau officials say they are unsure of how bat deaths affect farmers and agriculture. At the DNR, Scullon said the effect could be big.

“This is such a new phenomenon that we do not know for sure what the lasting ecological impacts will be,” Scullon said. “Removing those bats from the landscape will definitely have cascade effects.”

Michigan is the last state in the northeast region to find the fungus in bats. It is now one of 27 states with recorded cases, Scullon said.

New York and Pennsylvania have already seen a dramatic die-off in bats due to the fungus.

The fungus originated in Europe and was first seen in 2006 in a cave in upstate New York. It has since spread rapidly through North America.

“They have this white stuff on their nose and all over their skin,” Mies said. “When bats hibernate, the fungus grows on them and irritates their skin and changes their metabolism.  It causes them to wake up during hibernation seven times more often than those that don’t have it.”

Bats store body fat for hibernation in the winter and waking up uses lots of energy, Mies said.  If they wake up too much they starve.

In 2010 the DNR created a response plan for the fungus that aimed to keep it out of Michigan for as long as possible and preserve what healthy bats were left.

“It laid out a plan for how we would approach the aftermath when we got to that point where it was in Michigan and what we would look for when doing surveillance for the disease,” O’Brien said.

“At this point you probably can’t contain it in Michigan,” Scullon said. “Once it’s in the population it is easily spread from bat to bat. While we can’t control the movement of bats, we can control ourselves and try to not aid the expansion.”

People who have been in caves or mines where the fungus is found can spread the disease on their clothing if they do not clean themselves, Scullon said.

“State-owned caves and mines are protected sites,” Mies said. “People cannot go in and disturb or infect the bats so they have a fighting chance of making it through the winter.”

These mines are essentially located in the western Upper Peninsula, O’Brien said.

The Department of Natural Resources wants to help owners of privately-owned mines and caves make sure that visitors who come in and out are clean and not contaminated.

Homeowners can do their part by putting up bat houses, Mies said. This gives them a safe, dry alternative to raise their babies in the summer, keeping the population stable.

In the first year of infection in bats the death rate typically is not very high, but it rises at a rapid pace by the second and third year, Scullon said.

Bats can typically recover if the infection is not bad the first year but if they go back to hibernate in the same spot the next year, they will most likely get it again, Scullon said.

Researchers are looking at ways to eliminate the fungus or limit its growth.

“We are testing non-toxic natural defenses against it like traditional antifungals that can be spread on the bats or sprayed in the mines,” Mies said.

Officials are skeptical that the treatments will be of much help.

“Even if you have something that will kill the fungus, finding an effective way to deliver it to hundreds of thousands of bats is a very daunting challenge,” O’Brien said. “Whether or not it will be done quickly enough to prevent the spread of the fungus remains to be seen.”