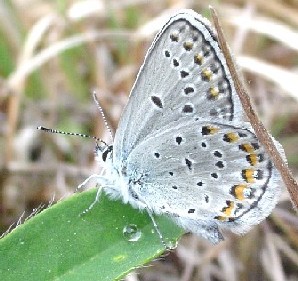 Some endangered species, like Karner blue butterflies, are benefiting from the harsh winter. Photo: Michigan DNR.

Heavy snowfall is proving to be helpful for some of Michigan’s endangered species.

Karner blue butterflies are federally listed endangered insects that are taking advantage of the protection the heavy snow brings, said Chris Hoving, an adaptation specialist with the DNR in Lansing.

“Karner blue butterflies do best when there’s continual deep snow through the whole winter,” he said.  “That’s what we’ve had this winter for the first time in decades. It’s excellent weather for blue butterflies.”

The Karner butterflies tend to lay their eggs in late summers and those eggs will sit through winter to hatch in spring, said Barbara Hosler, endangered species coordinator with the U.S fisheries and wildlife services in East Lansing.

“They lay eggs in leaf litter close to the ground for more protection from the elements,” said Hosler. “That snow cover will provide insulation, protect eggs from actual air temperatures which can be quite a bit colder than ground level underneath a nice blanket of snow.

“It also keeps the eggs from drying out, which can get them through the winter,” Hosler said.

Because of last year’s low populations there were fewer adult butterflies to produce eggs, Hosler said. But there is hope that this severe winter will allow for a rise in population.

A 2013 Department of Natural Resources report surveyed the long-term vulnerability of 400 endangered species. They found that more than 100 of the endangered species are threatened to some degree by a warming climate.

The climate will warm over the next 40 years at a rate  “roughly 10 times as fast as the warming over the past 100 years in Michigan” the report said.

This year’s severe winter weather may offer a temporary respite for them and not just for the Karner blue butterfly said Hoving.

“This winter is a weather phenomenon,” said Hoving. “There’s been a trend toward less snow and less consistent snow for the last 30 years. This year is an outlier.”

Another beneficiary of the cold is the cisco, a fish threated by warming climate.

“Ciscoes are doing really well because they lay their eggs under the ice and if there’s not ice then the wave action can turn up the eggs and a lot of the eggs die,” said Hoving. “If there is good ice cover then those eggs do really well.”

The heavy ice build up will create a good barrier for ciscoes and other fish that lay their eggs under ice, said Hoving.

Other endangered species that are doing well in the heavy snowfall include snowshoe hare, a mammal that turns white in winter months, said Hoving.  This year’s heavy snow allows for the hare to blend in with its seasonal white coat.

The ruffed grouse is taking advantage of the snow, said Hoving. The grouse will burrow under deep snow to hide from predators. Last year’s lack of snow left the grouse exposed.

3 thoughts on “Tough winter good for some endangered species”