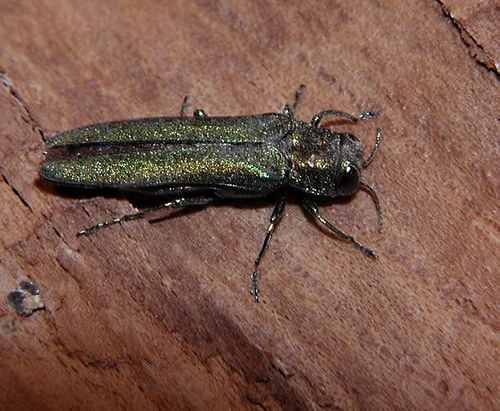 The bitter cold may have helped kill off the emerald ash borer had the polar vortex happened sooner, one expert says. Photo: Flickr.

Severe winter weather may lead to the death of some invasive species, according to a recent study.

In negative-10-degree weather, invasive species could freeze and die, the report from the USDA Forest Service and the Minnesota Department of Agriculture said.

The report shows the effects of severe weather temperatures on the invasive emerald ash borer, an insect that feeds on ash and kills the tree.

Regardless of the study’s findings and the bitter cold affecting Michigan this season, there is little hope for eradication of many of our invasive species, particularly the resilient emerald ash borer, said Deborah McCullough, a Michigan State University professor of entomology and forestry.

“Given that temps have gotten really cold, and not for one night but for an extended period, there’s a tendency for a lot of people to hope for insect mortality,” McCullough said.

There would have been some cause for hope had the polar vortex happened sooner, she said, but this late in the winter there isn’t much chance of insect deaths.

Cold temperatures coming in January are the problem, McCullough said. As seasons change, animals and insects acclimate to get used to the cooler temperatures.

“Insects go through a physiologically intense process of acclimatization in the fall and there’s actually changes in their bodies. It’s the equivalent of having antifreeze,” McCullough said.

If the insects don’t create this antifreeze their cells will freeze and burst, killing them, she said.

“If we had this Arctic vortex the first or second week of November, it might have been really different,” McCullough said.

“But there have been all these weeks of cooler and cooler temperatures for the ash borer larvae, under the bark, to have acclimatized. Because it’s the middle of winter they are as acclimatized as they could possible be.  Some of them are still going to survive it.”

McCullough said because they have adapted and lay dormant under bark that is an efficient insulator, they’ll reemerge in the spring.

Severe temperatures will have a better chance of slowing the population growth of other unwanted insects.

Ronald Murray, Department of Natural Resources (DNR) forest health unit manager, said hemlock woolly adelgid (HWA) was found in Michigan in May 2013 -— making a comeback after its elimination in 2006.

HWA preys on hemlock by injecting toxic saliva while feeding, he said. Eventually the insect will kill the tree.

While the DNR has taken steps to remove infested trees and treat surrounding trees, eggs are still distributed, Murray said.

“Adelgid eggs and tiny nymphs are abundant from March through June,” Murray said. “They are readily dispersed by wind, birds, deer and other mammals. Humans can also disperse the insect through various activities, including moving infested plants.”

However, any remaining infestations would most likely be killed off in the freezing temperatures, he said.

McCullough said the difference between hemlock adelgid and emerald ash borer is that the adelgid feed in the winter, exposing themselves to the freezing temperatures.

HWA dies in winter due to their eating patterns, McCullough said. The insect will travel to the pine needle to feed and be exposed to the freezing temperatures, while the emerald ash borer stays warm under protective bark.

McCullough said she hopes the cold will kill off other harmful species like mimosa webworm, an insect that webs leaves together and feeds on them. While the harm they cause is less severe than what emerald ash borer or HWA cause, it is still damaging and unsightly.

McCullough said mimosa webworm isn’t as cold tolerant as emerald ash borer but still acclimatizes to the weather. The hope is the cold will stunt population growth and provide a better chance to eliminate it.

Murray said, “Since they are reported in almost all literature as being very susceptible to cold temperatures in states further south than Michigan, it is reasonable to assume that they would not survive the vortex.”