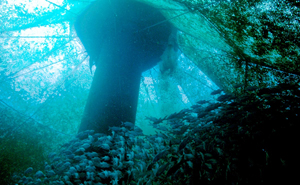 Sustainable fish farms could provide the state with a $1 billion a year industry, according to researchers funded by the Michigan Sea Grant, a coastal conservation research group.

“Michigan probably has the best resources available for this,” said Christopher Weeks, a Michigan State University fisheries and wildlife researcher. “The demand for seafood is projected to rise. The Chinese market alone is expected to increase their consumption by 300 percent by 2030.”

Fish farms work sort of like traditional farms, only fish are raised instead of livestock and crops, and tanks are used instead of fields.

About 80 percent of “aquaculture products” globally are freshwater fish, Weeks said. And the Great Lakes hold about 18 percent of the world’s fresh water supply.

“We believe, with the proper effort and investment, we could see a $1 billion industry here by 2025,” said Dan Vogler, the president of Michigan Aquaculture Association.

That would be similar in value to Michigan’s soybean or dairy sectors now, he said.

Most aquaculture is located in the Northern Lower Peninsula, said Joe Colyn of Originz LLC, an agribusiness consulting firm in Battle Creek.

But the relative novelty of the industry makes for an awkward match with Michigan’s environmental regulations, according to some.

Weeks said, “We’re seeing more business registrations, but we really haven’t been able to develop past $2 to $4 million in the last 12, 15 years. “And the question is why that is.

“I believe that the regulatory environment we have here in Michigan and in the U.S. has the tendency to say no to changes,” Weeks said.

Vogler said, “Since aquaculture has never been developed here on a large scale, in many cases we don’t have a rule structure that’s well-suited to allow it. It’s not so much that it disallows it, but we don’t have the type of enabling legislation that would allow aquaculture to grow.”

Michigan’s system for discharge permits, for example, is not designed for aquaculture, Vogler said. Rather, it’s designed for large industrial discharges.

“Our farm is the only farm in Michigan that has a discharge permit from the Department of Environmental Quality,” he said. “We have also applied for a Grayling facility, and that’s been a significant process to try to get work done because there’s not a lot of knowns.

“There’s really nobody to copy for this process,” Vogler said.

Similar reasons explain are why the industry lacks the capital needed to start up aquaculture operations, said Marquette-based Ron Kinnunen, who does educational outreach for Sea Grant.

“A lot of the financial institutions know how to finance agriculture, but when you start putting fish in the water, they get a little antsy,” Kinnunen said.

Vogler added, “They don’t really know what to do with you when you’re in a fledgling industry. If you’re an investor, it’s difficult if you don’t have comparables to look at. If you’re a lender, lending to that first guy with a project is a scary place to be.

“What we need is the administration to acknowledge that we’re open for business and that this is a priority,” Vogler said. “This is an opportunity that is potentially too good to miss.”

On another issue, environmental advocates have expressed concerns about outdoor aquaculture, as opposed to indoor facilities that raise fish in filtered tanks.

Outdoor systems typically bring water from ponds or lakes into “raceways” or they keep fish in cages in large bodies of water like the Great Lakes. With a raceway setting, water passes through like a canal and fish are fed in that area while the water leaves the other side.

In indoor systems, the same water is reused and the waste is stripped out, Kinnunen said. “When fish waste builds up, the toxic ammonia it releases into a body of water can kill fish.

“This is why most fish farms do sustainable practices anyway,” he said. “You have to have clean water to produce these fish and there’s a lot of regulations in place to control any effluent.”

“We can do it sustainably both places,” he said. “Norway has shown to great effect that they can grow a lot of salmon in a sustainable way outdoors and they use very few antibiotics. They’re very careful about the locations they choose.

“Right now, indoor systems are very costly, very high capital-intensive. What we’re finding in the U.S. is, without the R & D support like they have in Europe, we’re just not getting on the plank of economic viability with those indoor systems, with very few exceptions,” Weeks said.

“Given the water resources we have, we could increase Michigan’s seafood supply very quickly if we just had backing from state and federal folks,” he said.

Kinnunen said the potential, as well as regulatory and sustainability concerns, was the impetus for starting an Aquaculture in Michigan group.

It includes research, trade and stakeholders groups, along with government agencies such as the departments of Agriculture and Rural Development, Natural Resources and Environmental Quality.

The group meets quarterly to set up a road map for balancing those concerns, Kinnunen said.

“What we’re looking for is the right mix.”