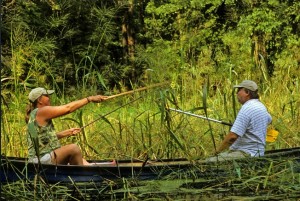 Wild rice harvesters Barb Barton of the Native Wild Rice Coalition and Steve Allen, a biologist with the Nottawaseppi Huron Band of Potawatomi, pull stalks of rice over the edge of the canoe and knock the kernels from the plant. Photo Mark Carlson, ©markscarlson.com.

Native wild rice is revered by the Ojibwa, Pottawatomi and Odawa tribes as part of the prophecy that brought them to the Great Lakes region.

But it has nearly disappeared from Michigan waters. Once common in the state’s rivers and lakes, sizable beds of the tall grass have dwindled to less than a dozen, the result of invasive species, higher water levels from dams, and lakefront property owners seeking to clear the way for water recreation.

To help bring back this culturally valuable and ecologically significant aquatic species, native Americans and ecologists are working on restoration projects throughout the state.

The path to recovery isn’t easy, said Barb Barton, an endangered species biologist who is part of the Native Wild Rice Coalition. The coalition has promoted the restoration of wild rice in Michigan since 2007.

“We’re still compiling information on where the rice beds were historically, but when you look on the landscape now and what we have mapped out, with the exception of maybe five or six sites in the Lower Peninsula that I’m aware of, there really aren’t any vast beds anymore,” Barton said.

To make matters worse, one of the largest beds in the Lower Peninsula is now seriously threatened, she said.

The East Tawas City Council in April approved a special assessment district to pay for the removal of “weeds,” including rice, on a portion of Tawas Lake in the northeastern Lower Peninsula. The action followed a request for the tax by lake property owners who complained that the vegetation impeded their boat access. “You can’t use the lake, it’s so thick,” said Tawas Lake Association president Michael Merluzzi. He said the rice currently covers about two-thirds of the 1,700-acre lake, and boats with smaller motors have difficulty navigating through it. “You might as well row, and you can’t even do that because the rice entangles the oars,” he said.

The destruction of rice in the state underscores a major issue: Although wild rice is protected in Minnesota and Wisconsin, only one threatened variety of rice (Zizania aquatica aquatica) is protected in Michigan, Barton said. The rest is vulnerable.

Currently, the rice removal on Tawas Lake is on hold pending an analysis to determine whether it is the threatened variety, according to City Manager Ron Leslie. “The wild rice was checked a number of years ago and found not to be the threatened (variety), but we need to retest,” he said. If the city gets the go ahead, 70 acres will be cut, and additional cutting will continue for up to five years.

The Native Wild Rice Coalition hopes to change Michigan regulations so that all wild rice is protected, but it must first educate people about the plant, she said. “One of the biggest challenges is that outside of the tribal communities and old duck hunters, most people don’t even know about rice in Michigan, and that includes people who work with natural-resource agencies,” she said. “I call it ecological amnesia. People don’t remember it, and therefore they haven’t been putting a lot of energy or effort into restoring it because it’s just not in their minds.”

Roger LaBine, chair of the conservation and cultural committees for the Lac Vieux Desert Band of Lake Superior Chippewa Indians in the western Upper Peninsula, is spreading the word about wild rice’s cultural significance through programs called rice camps. They teach traditional harvesting and tell the “migration story” of how rice brought native Americans to the Great Lakes region. The story begins on the East Coast, where LaBine said his ancestors were given seven prophecies, the third of which directed them to migrate westward to where the sun sets.

“The prophecy said that we would know we were home when we came to that place where the food grows on the water,” he said. That food, the wild rice the Ojibwa call manoomin, became and remained one of their staple foods for many years.

Members of LaBine’s band settled around Lac Vieux Desert, a lake southeast of Lake Gogebic on the Michigan-Wisconsin border, and continued to harvest wild rice from the lake until a hydroelectric dam, operated by the Wisconsin Valley Improvement Company, raised the water and flooded out the rice, he said. A court battle followed, and the band in 2002 was granted a 10-year test period to restore wild rice in the lake at lowered water levels.

Despite the success, he fears that the power company will petition to return to the higher lake level. “If that’s the case and if they win, it’s going to wipe out our rice again.”

The tribe has established rice beds on the Ontonagon River, Crooked Lake and Sucker Lake, and has been harvesting rice from the sites for each of the last five to six years. Some of the protein-rich rice is consumed as food or saved for ceremonial purposes, and the rest is used to reseed existing or to establish new rice beds.

Nineteen other lakes in the western U.P. have been identified as suitable habitat for rice, and will be heavily seeded in 2013 and 2014, LaBine said.

Restoration is in progress in the Lower Peninsula, too. Melanie Manion, natural resources management supervisor of Ottawa County Parks and Recreation, worked with Barton, the Match-E-Be-Nash-She-Wish Band of Pottawatomi Indians (also known as the Gun Lake tribe) and others to survey the southwestern Lower Peninsula county for wild rice. They concentrated on the Grand and Pigeon rivers and their bayous, looking for the threatened variety of native wild rice.

“We found more than 10 sites, and at least three of them were larger than an acre, which is really exciting,” Manion said.

For these populations, the major threat to the rice is the invasive common reed called Phragmites, which can take over habitat where wild rice grows, she said. The Ottawa County Invasive Phragmites Group will begin treating Phragmites with pesticides in the fall. Manion will then collaborate with the Gun Lake band, the Little River Band of Ottawa Indians and others in the summer of 2014 to identify waterways suitable for wild rice stands.

“In the fall of 2014, we’ll collect the seed (from current stands) and disperse it in any of the new sites that we think can support the rice, and then do that again in 2015,” she said.

Barton is excited about the restoration and not just by its cultural aspect.

“The ecological benefit of wild rice is absolutely incredible.” she said, “Wild rice beds are biodiversity hotspots. They’re known in particular in the coastal wetlands for their stopover habitat value for a lot of the migrating waterfowl, like the wood ducks, mallards and teals.

“Bitterns and herons and tons of birds utilize the rice. They also provide nesting areas for muskrats, nursery areas for fish species, and there are frogs and other small fish that use those areas as well,” she added.

Barton hopes wild rice will get another boost at the Stewardship Network’s annual conference next January at Michigan State University. In addition to presentations on restoration, it will discuss the need for regulations in Michigan to protect existing rice beds.

In the meantime, restoration and educational programs continue. Native American communities can have a great impact with both, LaBine said. “We need good tribal people who are going to step forward and have the knowledge and an interest in bringing back this very valuable gift that was given to us by the Creator. We need people to have in their hearts a desire to bring wild rice back to their communities.

“A lot of other tribes have been open and receptive, and are participating. I think we’re successful in this effort.”