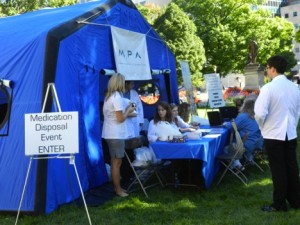 The Michigan Pharmacists Association holds an annual medication disposal event on the lawn of the state capitol. Photo: Dmitri Barvinok

Turning in unused medicine is the best way for the public to safely dispose of unneeded pharmaceuticals.

But collection centers and take-back events are technically illegal in Michigan.

Events or centers that collect medication, or “diverted waste,” are in the same category as county solid waste management plans. Since the sites are not authorized “transfer facilities” in these plans, they may be illegal.

The Michigan Department of Environmental Quality chooses not to prosecute as medicine take-backs have a positive impact on the community. The term Jim Sygo, deputy director of the department, prefers to use is “enforcement discretion.”

In fact, the Michigan Pharmacists Association stages an annual medicine disposal event on the lawn of Michigan’s Capitol. This year the group collected 579 pounds of medicines, 64 pounds more than last year.

Michigan state Rep. Andrea LaFontaine, R-Richmond, aims to bring drug take-back centers and medication disposal events under the umbrella of the law. Despite the lack of prosecution, legalizing these events will reduce organizers’ worry and encourage more people to return medication, she said.

Her bill also makes it easier to get rid of unused or expired medication by adding guidelines for collecting and managing the waste. It would also require that waste be stored and transported in such a way that it would not be released into the environment.

The legislation would bring Michigan up to speed with other Great Lakes states. New York passed the Drug Management and Disposal Act in 2009, which encouraged both take-backs and notifying people on the proper disposal procedures. Wisconsin has 135 permanent centers for drug collection, as well as many one-day-only events. Ohio runs the Drug Disposal Days program to set up both small and community-wide events.

The Environmental Protection Agency told Americans to flush unneeded pharmaceuticals down the toilet up until the 1970s, according to Sygo. Medicine found its way into groundwater and began to affect local wildlife.

“They’re very difficult to treat,” Sygo said. “Our wastewater treatment plants really don’t provide adequate treatment for them. So they remain there in the low concentrations we’re seeing now.”

The EPA has found that low levels of pharmaceuticals in surface water cause problems for aquatic life, Sygo said.

In New York, certain drugs, like birth control pills, have caused male fish to exhibit female characteristics, according to the New York Department of Environmental Conservation. This prevents the fish from reproducing.

The number of dispensed prescription painkillers increased 48 percent between 2000 and 2009, according to Ed Szandzik, the president of the Michigan Pharmacists Association.

“Baby boomers are taking more drugs,” Sygo said, “I’m one of them.”

If you can’t make it to a collection center or event, Sygo recommends taking a small container, like a coffee can, and mixing your pharmaceuticals with cement, before taking it to a landfill. 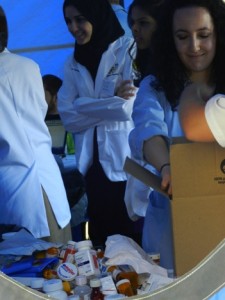 Pharmaceuticals are organized and prepared for disposal. Photo: Dmitri Barvinok.

“If you had leftover prescriptions, would you know to go out and get this Portland cement, mix it up, and get rid of it? By allowing these facilities to essentially expand and no longer have to worry about violating the law, in the other areas, it’ll allow people to dispose of (pharmaceuticals).”

The cement is used to both disguise the drugs and to seal them properly inside a landfill, to avoid leaks. Disguising drugs prevents them from being found in the dumpster and potentially abused.

“It won’t just be a random one-drug take back day,” she said.

Properly disposing of excess medication prevents it from falling into the wrong hands, said Szandzik. Pharmaceutical abuse is a serious problem and considered to be a true epidemic by the Centers for Disease Control and Prevention.

The number one cause of accidental death in America is prescription drug overdoses, he said.

The Drug Enforcement Administration has scheduled a national drug take-back from 10:00 a.m. to 2:00 p.m. Saturday. Use this search tool to find a nearby collection site.