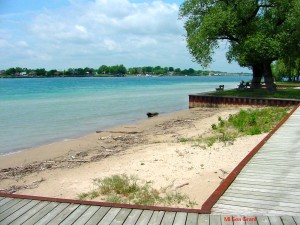 The St. Clair River in May, 2001. Lake St. Clair was down a little over a foot that month. Photo: NOAA

The lower the water in the Great Lakes, the larger the stretch of uncovered shoreline for phragmites to invade.

And the longer water levels stay low, the easier it is for this prolific invasive plant to crowd out native plants and form a thick mat of reeds that covers shorelines

Lower water levels in the Great Lakes starting in 1999 coincide with an increase of phragmites in the region’s wetlands, according to a recent study in the Journal of Great Lakes Research.

The study tracked the effects of changing water levels in the Great Lakes on wetland vegetation. It measured plant populations on Dickinson Island in the Lake St. Clair river delta and at Fish Point in Lake Huron.

Low water levels expose soil and give buried plant seeds the room to grow and spread. High water levels drown them out. When that cycle gets thrown out of whack, certain species move in and take over.

Fluctuating water levels control phragmites and other wetland plant species, said Douglas Wilcox, a professor of wetland science at The College of Brockport, State University of New York, who completed the study.

It’s the low levels that seem to matter though.

Low lake levels in 1999 are responsible for the increase in vegetation, Wilcox said. “We had wetlands restoration at no cost to the taxpayer.

“The disadvantage is that now nature has to deal with invasive species.”

Right now there is a trend of low water levels in the Great Lakes. That’s bad news, according to Wilcox.

“We need high lake levels to control phragmites, he said.”

The U.S. Army Corp of Engineers recognizes the trend from water level averages  taken from 1918 to present.

“Lakes Superior, Huron and Michigan are at the longest stretch of lower water levels in recorded history,” said Keith Kompoltowicz, the chief of watershed hydrology for the Corps’ Detroit district.

“Snow fall is the largest determining factor to whether or not waters rise in the spring,” Kompoltowicz said.

Based on historical lake level patterns, water levels should have come up already, Wilcox said. But Great Lakes water levels are driven by climate.

A consensus of scientists point to increasing evidence of global warming caused by the burning of fossil fuels. That warming in turn could affect lake levels.

Because low water levels aren’t something that people can just fix, watershed groups have had to get creative in their

A thick bed of phragmites invading a shoreline.

In Grand Traverse County, Mich., it’s controlled with a “Glove of Death.”

Licensed contractors spray a glove with an herbicide and selectively swipe the phragmites with it.

“You do this so you don’t kill native plants like bulrushes,” said Sara U’Ren, the program director at the Watershed Center Grand Traverse Bay.

The area began using the herbicide after experiencing five years of an ever-increasing phragmites population.

Phragmites starts on the shoreline, but if left untreated or uncontrolled it can move out to deeper water, said Maureen McManus, a program associate.

The plant’s roots can grow out 30 feet into the water every year. Those roots float until they form a mat that sinks to the bottom of the water.  Anecdotal evidence there suggests that phragmites doesn’t like to be in over two to three feet of water.

She considers the area lucky for having caught it early on. After two years of treatment, the county has seen an 80 percent reduction in the plant’s population.