For the first time ever, federal authorities are banning an antibiotic in livestock because of fears that some diseases in people are becoming resistant to it.

The Food and Drug Administration’s ban of cephalosporin this Thursday will only apply to uses not specified by the drug’s label.

“Most antibiotics were developed for use in humans in the first place,” said Steve Halstead, state veterinarian at the Michigan Department of Agriculture and Rural Development. Many have other uses not stated on their labels, often due to a lack of research funding to ensure the safety of those uses, Halstead said.

Cephalosporin is most commonly used to treat human infections of the skin, respiratory tract and urinary tract. It is also used on cattle, swine and poultry to promote growth by killing internal bacteria.

However, the drug is more commonly used to treat infections in dogs and cats than in food-producing animals. Because of its widespread use veterinary offices, the ban will not apply to pets.

The FDA said that the ban is intended to preserve the drug’s effectiveness on humans.

Murray Borrello, director of the environmental studies program at Alma College, said the FDA should have gone further.

“The ban of cephalosporin is probably a good start in my opinion, but it’s not nearly as far as we need to go,” said Borrello, who researches the prevalence of antibiotic-resistant bacteria around industrial farms near Alma.

He’s found more bacteria in the air around industrial farms that are resistant to the antibiotic tetracycline than in areas further away from them.

The constant addition of antibiotics to the feed of those animals causes a significant rise in bacteria resistance, Borrello said. 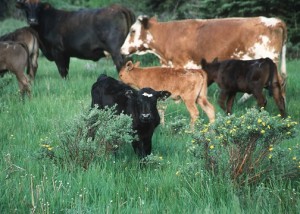 He compared it to people taking antibiotics when they can do without them, thus increasing the risk of a more serious infection later.

Tetracycline is the most widely used antibiotic on animals, Borrello said. Since cephalosporin is not as popular in animal agriculture, the FDA ban will probably make only a dent in lowering drug-resistant bacteria from farms.

Food-producing animals account for 80 percent of antibiotic use in the United States, according to the FDA. The widespread use of antibiotics can also create a higher risk for foodborne illnesses from bacteria like E. Coli and MRSA.

However, use on animals isn’t the only reason for the rise in dangerous bacteria. “The human population is generating it’s own superbugs simply because we are taking so many antibiotics,” Borrello said. “So were killing the easy bugs and what is left are the bacteria that are resistant.”

Still, Halstead said, the ban makes a big statement. “It’s a step, and it’s an indication that the FDA is taking antimicrobial use seriously,” Halstead said. “They want to get the attention of animal farmers and large animal veterinarians.”