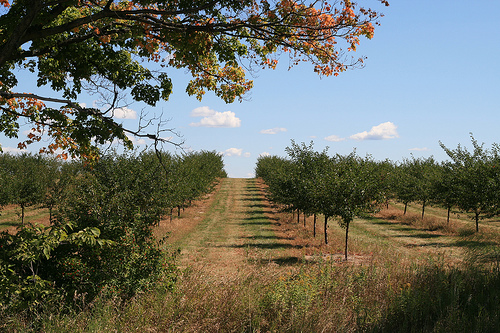 A warming climate has cherry orchards like these in northwest Michigan blooming seven to ten days earlier than they did 30 years ago. Photo: Bernt Rostad

By Andrew McGlashen
The Daily Climate

In the glacier-carved hillsides of northwest Michigan where half of America’s tart cherries grow, climate change is already in full bloom.

That’s why, in 2003, a group of Michigan State University researchers decided to study what a changing climate will do to agriculture and tourism in the state, including the $44 million dollar a year tart cherry industry.

They formed the Pileus Project, a group of agricultural experts, economists, climate scientists and others, funded mainly by the Environmental Protection Agency and charged with giving cherry growers and other stakeholders useful climate data to help them make better decisions.

The group chose the name – a pileus cloud forms a cap over cumulonimbus clouds – to reflect its overarching, interdisciplinary nature.

Their work provides insight on the promises and pitfalls of what researchers and policy makers agree is an urgent task of climate science: translating the global problem to backyard consequences.

“The impacts of climate change will be largely on the local and regional scale,” said Pileus co-director Julie Winkler. But the global models used for making climate predictions are so coarse Ã± they make projections for rectangular areas that may be hundreds of miles long on each side Ã± that they don’t account for local phenomena.

Their resolution calls to mind Atari when what’s needed is more like PlayStation3. Climate scientists now are working to “downscale” the models to make projections for specific areas.

Nor are planetary predictions very helpful for cherry growers, so the Pileus project’s work is an important piece of the puzzle. “It’s critical to a lot of what we’re concerned with,” said Andresen, who co-directs the project. “Growers don’t care about global averages so much. It’s much, much more important to know what’s happening on my farm or in my neighborhood.”

Planting a crop is an inherently risky enterprise, but much more so for cherry growers than for, say, a corn or wheat farmer, according to Roy Black, an agricultural economist working on the project. When you plant wheat, you’re making a one-year gamble. But a cherry tree typically has a 20- to 30-year cycle of productivity, and it may be a decade before it produces fruit, so whether to plant a new orchard is a crucial decision that could influence your bottom line for a big chunk of your life. 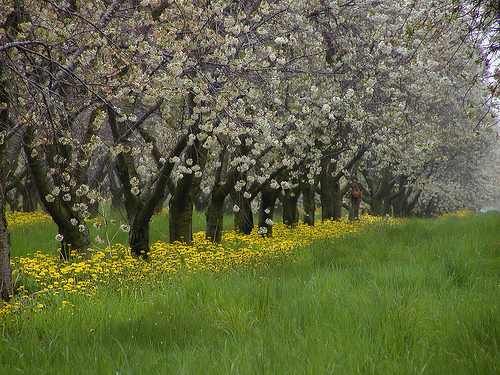 “Whatever decision you make, you’re going to live with it awhile,” Black said. “The cost of being wrong is kind of high.”

Add global warming and a general decline in the profitability of cherry-growing in recent decades, and that decision gets harder. And the average cherry tree in northwest Michigan is older than it’s been since at least World War II, Black said, so for many growers, the decision must be made soon.

“This is an industry that has seen changes in climate, so it’s not an issue of convincing them that something is different,” he said. “From their point of view, this has not been a very profitable industry for quite a while. So the bigger picture is, is this industry at a point where we ought to be reinvesting?”

The Pileus researchers would like to offer farmers a simple answer to that question, but they have instead bumped into one of the fundamental facts of climate change: In the future, uncertainty reigns.

The group used two distinct methods to downscale a handful of global models for specific points in Michigan and around the Great Lakes, and devised life-cycle models for the average cherry grove. They combined these with historical data indicating how past climate has influenced profitability.

The result was not a prediction or forecast – Earth is too complex a place for that, and future greenhouse gas emissions are too uncertain. Rather than a simple chart illustrating future climate, what emerged was a wide range of possible scenarios for the rest of the century.

“Part of the story at Pileus is, at what point do those squiggly lines get un-squiggly sufficient that you can have confidence that there’s a story there?” he said.

The group’s EPA funding has expired, but they’re using other money to try to determine the likelihood of each future scenario, of which there are actually more like 60 for each of 15 weather stations around the Great Lakes.

But for now it’s unclear if there is, as Black put it, a story there.

The downscaled models suggest that the region will heat up by 1- to 3- Celsius, but they’re less clear on precipitation, with some simulations showing less of it and others showing more. It’s also unclear if extreme weather events will become more frequent and severe or less so, though the former appears more likely. Spring frosts are the biggest threat to cherries, and the simulations suggest “the impact of frost is going to be a little worse, but not humongously so,” said Black.

That lack of clarity is to be expected, according to Princeton’s Stouffer. “Shifts in probability is probably about as good as we’re going to do,” he said. “Even if you had God’s model Ã± the one that gives you the right answers Ã± you could run it ten times and get ten different answers.” 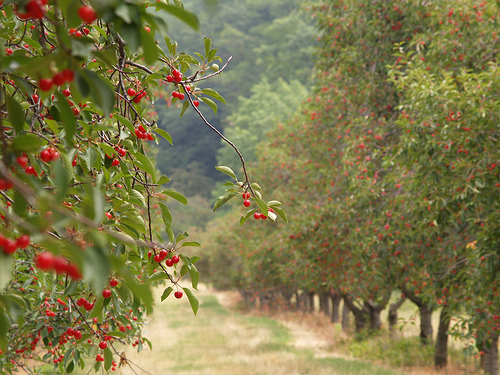 Since providing clear predictions is out of the question, he said, climate scientists must work closely with stakeholders, as the Pileus team is, and talk about uncertainty in a clear way.

“This is an area of active research on how to communicate what you know and what you don’t know to people who aren’t specialists,” he said. “And it’s not easy. People are used to dealing with weather uncertainty, and we need to train them to deal with climate uncertainty.”

While it’s far from certain that spring frosts will become more common in cherry country, even a hint that they might occur more frequently is worrisome for growers like James Nugent, who has worked on the project as an MSU horticulturist.

In 2002, after unseasonably warm April weather teased out cherry buds, an Alberta Clipper came howling across Lake Michigan, sending temperatures into the 20s and killing more than 99 percent of the crop.

“We couldn’t have made a cherry pie,” Nugent said.

“If that got to be more routine, it would have huge implications economically. From a grower’s perspective, you had just zero income. But you can’t just walk away from the trees. We still have to spend a lot of money, even if we don’t make dollar one.”

The 2002 die-off “may have had nothing to do with climate change,” Black said, “but nonetheless, the growers were pretty anxious.” If the Pileus team could say with any certainty that a frostier future lies ahead, growers might invest in wind machines or other frost protection, or plant a hardier variety of cherry. They might switch to a different crop, or get out of farming altogether.

For now, “it remains to be fine-tuned,” Black said.

Still, there’s no question this is the best scientific approach to making projections, Andresen said. “The range of predictions is wide – almost disturbingly wide. But we have to do this.”

As climate models are brought from the abstract, global scale to the neighborhood level, it becomes clear that real people’s livelihoods are at stake, so honesty is important, according to Black.

The inability to make clear predictions is frustrating, he said, but it’s better than having too much confidence in an oversimplified model.

“You really have to get the capacity to get local,” he said. “But we also have to get good enough at it that it’s credible.”

The group’s portrait of such troubling complexity was a good thing for science, he said.

“Because when we get it all out in front of you Ã± man, this story’s not so clear.”