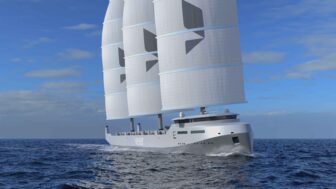 The design of Veer Groups’ sailing vessels was recently approved by the American Bureau of Sailing. Image: Veer Group.

A start up company recently got design approval to build a ship that moves cargo with sails rather than fuel.

The 330-foot-long, hydrogen cell powered sailing vessel is proposed by the Veer Group, a Bahamas-based company committed to zero carbon emissions. The design was approved by the American Bureau of Shipping. 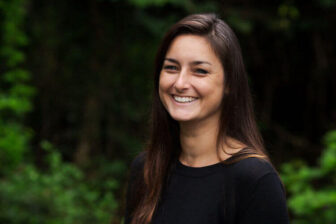 “If there was a desire for this in the Great Lakes, it would just make me super happy to be able to fulfill that,” said Veer CEO Danielle Doggett.

Whether such vessels will someday ply the Great Lakes is uncertain. But interest is high in decarbonizing shipping. Globally, shipping’s 100,000 vessels are responsible for 3% of carbon emissions, according to Maersk Mc-Kinney Moller Center, a nonprofit research company committed to decarbonizing the maritime industry.

The Maritime Administration recently announced a study to explore low carbon options for shipping on the Great Lakes. The group, which includes the International Council on Clean Transportation, the American Bureau of Shipping and others, is looking at alternative fuels and power.  The study will examine environmentally friendly fuel alternatives like biofuel and how to incorporate different power systems, like hydrogen fuel cells, into Great Lakes shipping, according to a press release.

Combustion engines have dominated the shipping industry since the 1930s. Veer is looking to bring sailing cargo back, Doggett said. The company seeks funding to begin an 18-month build and have two vessels sailing by 2024 and six by 2026. 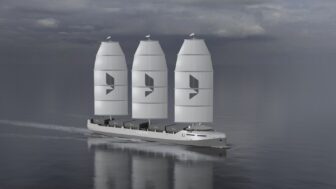 The sailing vessel design that Veer Group is looking to put on the water by 2024. Image: Veer Group.

“Veer sail ships in the Great Lakes would make a lot of sense,”  Doggett said.

One reason is that Veer’s plans are consistent with the clean shipping goals of the U.S. and Canada, Doggett said. Another component for the Great Lakes is that the hydrogen fuel cells produce freshwater. It would be nice to excrete freshwater into a freshwater lake rather than into the ocean, Doggett said.

Growing up around the Great Lakes ships in Kingston, Ontario, inspired her field of work, she said.

“If we want to be at zero carbon by 2050, the decisions we make in the next five years are really going to shape what fuel will become dominant,” Collette said.

“If the levels are low, or lower than normal, for each inch of water we lose as much as 270 tons of cargo per vessel load,” said Weakley, whose organization moves over 90 million tons of cargo throughout the Great Lakes each year.

The group wants to reduce the risk of climate change and is open to using Veer Group vessels once they are sailing, said Debra DiCianna, director of environmental affairs for the Lake Carriers’ Association.

But using the existing ships on the Great Lakes would be better, she said.

“With our membership and their existing fleet, they are doing well at hauling the cargo that they need to,” she said.

Veer’s sailing vessels may be part of the solution, Collette said. But figuring out a balance of technologies and fuel is the way to a more sustainable future.

“We don’t have a single winning technology today that everyone is pointing to and saying this is the way forward,” he said.

While Veer’s methods may not be in the cards for the Great Lakes for another few years, the idea of sail-assist to reduce emissions is relevant today, Collette said.

It is easier to update existing Great Lakes vessels by adding sails or replacing combustion engines with a lower sulfur level fuel cell, he said.

“Adding sails to existing ships might reduce emissions from 10% to 30%, he said. “But I think we are also going to have to figure out a zero carbon fuel source for them.”

“I think there’s a lot of work to be done on figuring out which one of those will be the most effective,” he said.

“We need to make sure we are taking a holistic view of minimizing our impact on the Lakes and the people who live around the lakes,” Collette said.