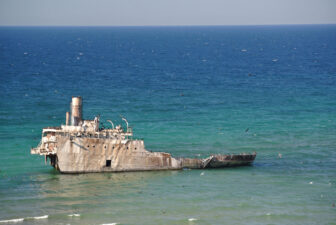 Some trails break out of the woods at a lake. Some climb a dune to a sweeping view.

And many – more than you probably thought – lead to a shipwreck with a story on a beach.

This summer could be excellent for shoreline shipwreck viewing as the U.S. Army Corps of Engineers predicts that the water level of lakes Michigan and Huron could be almost 2 feet below the record highs set in 2020.

The state is blessed with accessible shipwrecks that don’t require an air tank or a wetsuit to view – only a pair of hiking boots, a paddle or a snorkel and mask.

The heart of shipwreck territory is Sleeping Bear Dunes National Lakeshore, but there are others, including a wreck in Thompson’s Harbor State Park in Presque Isle County and more off the shore of the Upper Peninsula’s Pictured Rocks National Lakeshore.

High and dry for easy viewing this summer will be one of Michigan’s newest exposed wrecks, the Jennie and Annie.

The 137-foot schooner, built in 1863, was rounding Sleeping Bear Point in November 1872 when gale-force winds pushed it into the shallows and reefs of Lake Michigan’s notorious Manitou Passage. The ship, its 10-member crew and a cargo of corn were driven aground 9 miles south near Empire. Only three crew members survived.

Gone forever? Hardly. For the past two summers, a substantial piece of the hull has been visible on a Sleeping Bear Dunes National Lakeshore beach.
Here is a landlubber’s guide to other great Michigan shipwrecks:

City of Boston: Built in Cleveland in 1863, this 136-foot-long wooden steamer also featured a mast – and a history of bad luck.

In 1868, it collided with another steamer and sank in the Straits of Mackinac. When the steamship was raised 125 feet two years later, it was the deepest salvage ever attempted in the Great Lakes up to that time.
After being rebuilt in Cleveland, the ship returned to service as a stream barge, only to finally meet its end on Nov. 4, 1873, during a storm with blinding snow.

It was hauling flour and corn when it ran aground on a sand bar just off Green Point Dunes Nature Preserve in Benzie County. The raging surf quickly broke the hull, and the crew abandoned ship.

The ship’s remains are west of the preserve’s beach access stairway, 150 to 200 feet from shore, depending on water levels. It’s angled in 7 to 8 feet of water, with its stern buried in the sand bar and its bow occasionally less than 4 feet below the lake’s surface. It’s easy snorkeling, and visitors can see the outline of the bow in clear water from the preserve’s second observation deck.

James McBride: Sleeping Bear Dunes National Lakeshore is a graveyard for shipwrecks, including this 121-foot brig built in 1848 and lost in October 1857. A November storm in 2014 washed up a 43-foot-long section of the James McBride, making it the largest shipwreck ever to appear on the park’s shoreline.

Francisco Morazan: On Nov. 27, 1960, this Liberian freighter left Chicago bound for Holland with 940 tons of cargo, a crew of 13, its captain and his pregnant wife.

The next day, the ship ran into 40-mile-per-hour winds, snow and fog that made for a virtual whiteout.

The captain thought he was rounding Beaver Island, more than 100 miles away, when he ran aground on the south side of South Manitou Island.
A Coast Guard cutter and helicopter rescued the 15 people, but left the wreck behind to be forever battered by Lake Michigan.

Today it’s the most popular destination for campers on the island. The wreck is also popular with kayakers who bring their boats over on the ferry.

American Union: This 186-foot, three-masted schooner was one of the largest sailing ships to work the Great Lakes when launched in 1862. Its size ultimately led to its demise when it encountered a fatal storm in 1894 that grounded it at Thompson’s Harbor State Park, northwest of Alpena. The crew was saved, and today the wreckage rests a quarter-mile from shore in 10 feet of crystal-clear Lake Huron water.

The remains of the hull offer viewing opportunities for snorkelers and kayakers.

AuSable Reef Wrecks: From Pictured Rocks National Lakeshore’s Hurricane River Campground, visitors can head east on the Lakeshore Trail and pass several wrecks, then end up at the AuSable Light Station built to protect the ships. 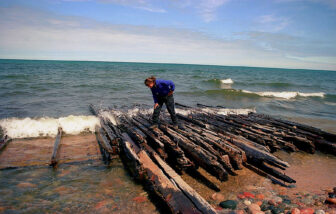 The first wreck, the Mary Jarecki, lies just outside the campground. The wooden bulk freighter was carrying iron ore and grounded on the AuSable Reef in July 1883. When other boats couldn’t tow it off, the ship was left to be battered by Lake Superior.

Its remains are just offshore and are challenging to see if there is a chop on the lake surface.

But a hike further down the trail leads to timbers and ironwork from two wrecks half-buried in the sand.

The first is the Sitka, a wooden freighter that grounded and broke in half in 1904.

The second is the Gale Staples, built in 1881. The wooden freighter was loaded with coal when it beached itself on the sandy reef in 1918.

America: On June 6, 1928, this tourist ship was loaded with crates of fresh fruit and 48 passengers when it left a resort on Isle Royale National Park’s Washington Island and, within a half-mile, struck a reef.

It sank within sight of horrified hotel employees and guests back at the dock.
No deaths occurred, but bushels of fresh fruit washed ashore for weeks after the mishap.

Even more unusual, the ship sank in a vertical position, with one end lying less than 3 feet below the surface of Lake Superior.

Curious visitors can rent a canoe in Windigo and paddle out of Washington Harbor into the North Gap, where a buoy marks the ship’s location. Lake Superior is so clear it’s amazing how much is visible from a canoe seat.

Jim DuFresne is the editorial director at MichiganTrailMaps.com and an MSU Journalism School alum.

One thought on “Shoreline shipwreck viewing predicted to be excellent”