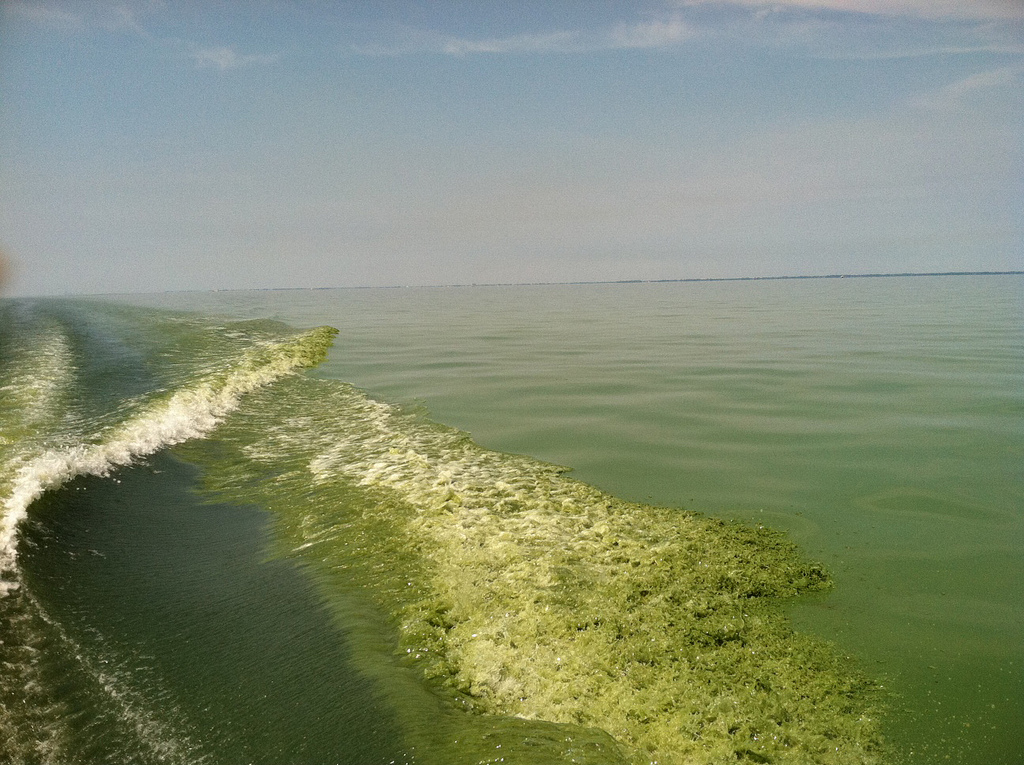 Toxins from harmful algal blooms are known to pollute water, but now researchers are looking at how they harm Great Lakes air.

And that also could have implications for human health, they say.

Particles of water emerge into the air when waves break, said Andrew Ault, a chemistry professor and researcher of aerosols at the University of Michigan. These particles sometimes contain toxins.

“This is one of the largest sources of particles getting kicked up into the atmosphere globally, but the Great Lakes are really different,” Ault said.

Scientists have studied particles emerging from the ocean for decades, he said. But, freshwater aerosols, like those from the Great Lakes, have only been studied for about a decade.

Aerosols are a liquid or a solid suspended in gas, said Haley Plaas, a doctoral student and aerosol researcher at the University of North Carolina at Chapel Hill. For example, COVID-19 can be spread through aerosols and that is why people wear masks.

Plaas published a study about airborne toxins from algal blooms in December in the journal Environmental Science & Technology.

Her study’s most important takeaway is there is evidence that suggests harmful toxins and algae itself are found in the air, she said. Airborne algal toxins may be more of a threat in the Great Lakes than previously thought.

Scientists are unsure how much toxin is in the air, how weather or water quality affect it or what human health effects it could cause, Plaas said. Right now, more research is needed to understand what inhaling this toxin could mean for human respiratory health.

“A main concern is for people who live near these bodies of water that experience the blooms, and also for people using it recreationally, like jet skiing, boating, fishing,” Plaas said.

Recreation in the wake from a motor is especially troublesome because that’s a source of bubble bursting which can make the toxins airborne, she said.

Ault has published several papers on aerosols and is working on one that shows algae toxins in the Great Lakes are getting into the air. He plans to work with engineers and modelers to develop a risk system that would help people avoid poor air quality from these blooms.

Then he’d like to work with epidemiologists to relate exposure to health, he said. “So, that’s kind of the trajectory of where we see this going.”

In the meantime, don’t panic about airborne algae toxins, he said. Still, it doesn’t hurt to be cautious. If you know of a nearby algae bloom, don’t walk or participate in recreational activities near it.

A lack of research about harmful algal blooms and air quality is in part due to funding, Ault said.

“We need to show that it’s important for people to get excited to fund it,” Ault said. “… We’re going through that cycle, but I wouldn’t say that funding agencies have paid much attention to it yet.”

Funding has primarily come from local agencies rather than national ones, he said.

Algae blooms occur because of a warming climate and nitrogen and phosphorus runoff from things like agriculture, said Judy Westrick, a chemistry professor at Wayne State University and a researcher who has worked with Ault.

In the Great Lakes region, algal blooms occur in inland lakes and the western basin, such as Lake Erie, Westrick said. They primarily occur in shallow water.

Research focuses on water quality because of observation, Westrick said. When people became sick after swimming in toxic water, scientists began researching it.

However, now that water quality is better understood, scientists are branching out into understanding algae toxins and air, Westrick said.

“You’re probably going to see in probably the next year, like 100 studies on aerosol,” Westrick said. “…Aerosol has become a big thing because of a couple of factors.”

Those factors are part of climate change, she said. Heavy rainfall can cause waves and break up harmful algae, releasing particles that could be toxic in the air.

Westrick and Ault plan to study living algae being broken apart by waves, she said. Once algae breaks apart it dies and may release toxins into the water. Westrick and Ault will study how they affect air quality.