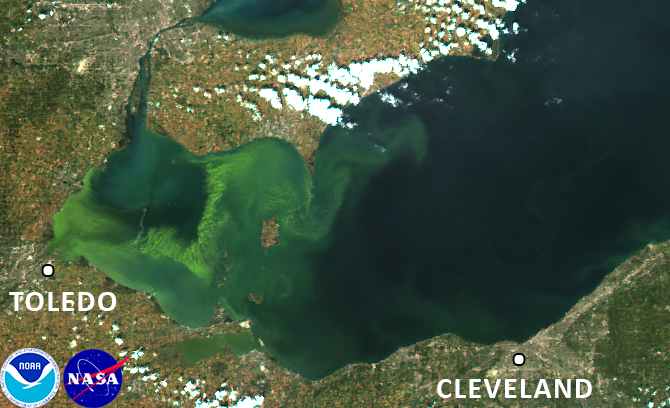 The controversial measure was challenged in court just a day after Toledo voters passed it on Feb 26th. The legal battle, Drewes Farm Partnerships v. The City of Toledo, Ohio, is bitter and ongoing.

It has friends in high places. Recently Toledo Mayor Wade Kapszukiewicz characterized the proposal’s passing by a 61-39 percent margin as a “primal scream of anger,” according to the Toledo Blade.

Representatives for Drewes Farm — a corn, soy, wheat and alfalfa farm in Wood County, Ohio — claimed that the bill is “is unconstitutional and unlawful” in their opening court statement.

Lawyers for Drewes argue that the bill is a massive liability to the family owned and operated farm because they cannot guarantee that all runoff will be prevented from entering the Lake Erie watershed.

“If Drewes Farms cannot fertilize its fields, it will be unable to survive economically,” they stated, according to public court documents.

But Noah Hall, an environmental law professor at Wayne State University, says The Lake Erie Bill of Rights is more than just a step in the right direction for Toledoans. It’s a stand for the rights of the people, he said.

“To me, this is the most peaceful way to have a revolution in America,” Hall said. “We have to really respect not just the outcome, but the process, in Toledo, of the voters peacefully going to the ballot on a frankly lousy day and saying, ‘this is what we want the laws of the country to look like,’

“If we don’t allow communities to decide their own laws, we’ve narrowed the options for our democracy to continue.”

After a 2014 algal bloom in Lake Erie rendered 400,000 people without drinkable water, many Toledoans felt existing water laws weren’t up to the task of protecting the lake, Hall said.

“The toxic blooms were a direct result of underregulated pollution from farms,” he said. “That pollution is just not adequately dealt with by existing laws.”

“The approach taken by the residents of Toledo conflicts with many state and federal constitutional laws,” said Hall, who is unrelated to Noah Hall. “I don’t expect a court to allow a city to disregard or eliminate those pre-established laws. Our constitution here in Ohio prohibits a city from reaching beyond its municipal borders and attempting to control general laws that affect all citizens of Ohio.”

Reform starts in the language of our laws, Noah Hall said. He points to Ecuador, which in 2008 became the first country to enact rights of nature in its constitution.

“Establishing rights of nature have proved, in Ecuador, to be an important new tool in extracting better decisions from the government,” he said. “They have words that describe the value of life just being, words we don’t have. In our legal system, our language doesn’t even have a term for something that is not either a person or the property owned by a person.”

A bill of rights is the best we can do under our current legal system, Hall said, to protect natural resources like Lake Erie from further destruction.

Peggy Kirk Hall has a solution of her own: “I’d prefer that we quit arguing about the Lake Erie Bill of Rights, stop the finger pointing, and stay focused on solving the water quality problems we face.”

When asked to comment, Drewes Farm owner Mark Drewes said, “I can’t talk about that.” His lawyers did not respond to multiple requests for comment.

One thought on “Granting rights to a resource”