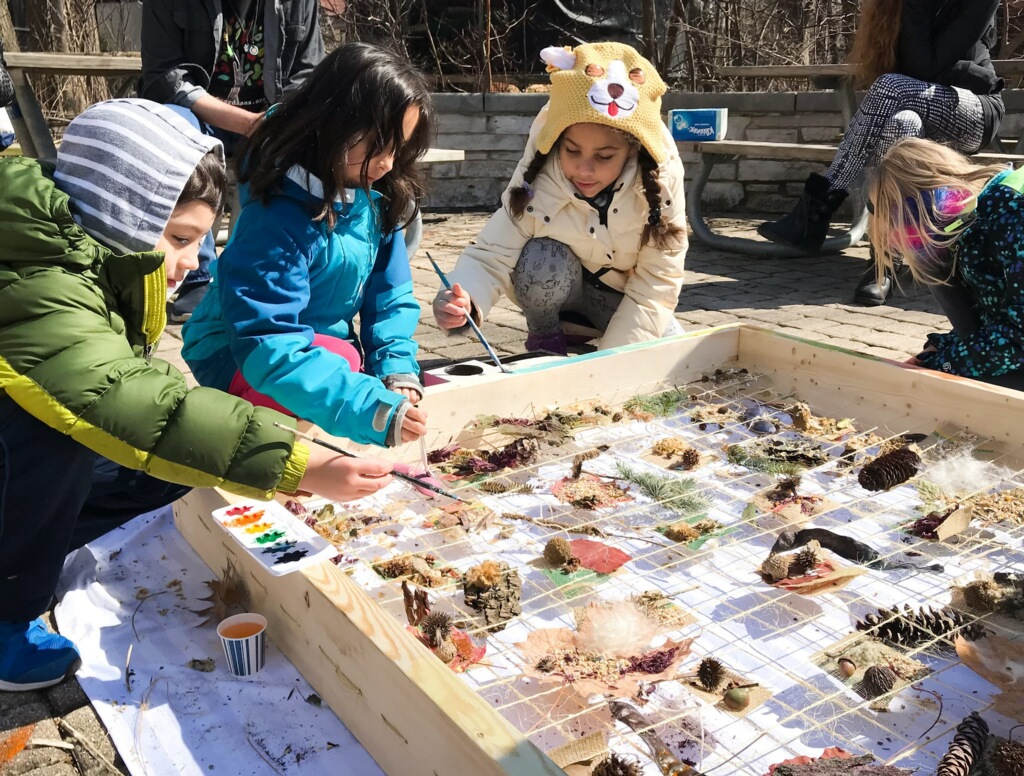 Growing up in Stevensville, Michigan, Hora was drawn to “the world of the minuscule and details in nature,” she said.

She would draw objects she’d collect outside, she said. She started printmaking after viewing her observational objects collection as art.

“That’s when I started being interested in the idea of seed quilting (and) doing something with those seeds in a more purposeful way,” Hora said. “From that, it kind of evolved into art.”

The seed quilts are made of biodegradable material, including burlap and homemade glue, she said. Each of her workshop students has a piece of fabric to design with seeds that they’ve gathered. Participants combine all squares to create a quilt. 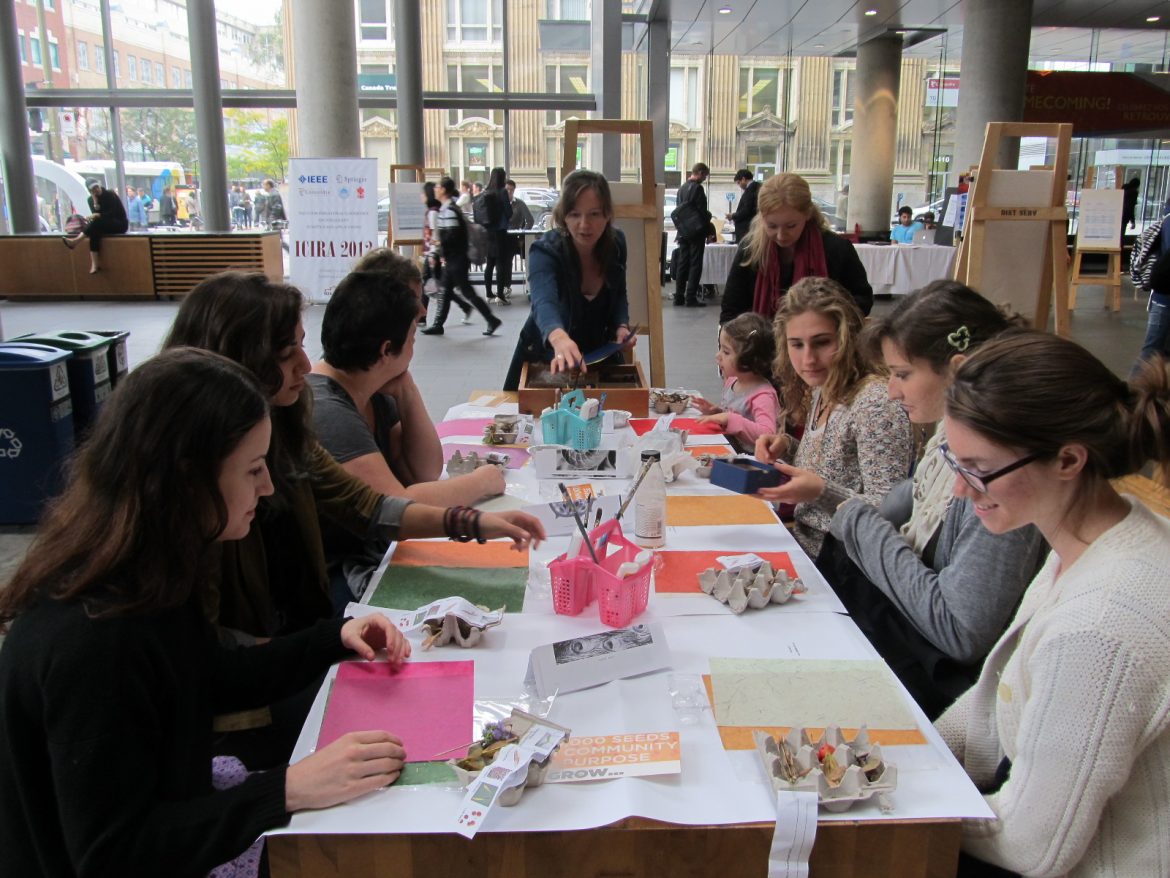 She teaches the same curriculum to people of all ages and calls her art supplies “litter fall,” a reference to the plant materials her students collect from the ground.

“I found that no matter what age, I’m engaging with basically drawing them outdoors to have the adventure of finding the seeds,” Hora said. “Identifying the litter fall is like a universal language that people love no matter what age they are.”

She has students hunt for seeds in areas like parking lots and sidewalks so they can relate to the landscape. This way, familiar seeds can be found.

“If I have a maple tree seed, folks will see it and say, ‘Oh, that’s a helicopter seed,’ because that’s the common name,” she said. “Nature basically finds its way everywhere. Even if it’s like a crack in the sidewalk, there’s going to be the maple helicopters in there.”

While kids learn about places far from them like the Arctic, Hora said it’s also necessary to learn about local landscapes to feel connected to them.

“The arctic polar bears are really awesome, but they may never see a polar bear,” Hora said. “But there’s all this fauna and flora in our backyard that we can study.”

Sometimes, workshops will go beyond making a quilt.

Hora and her students will find a safe area to plant the quilt such as on school or library ground, she said. Then, they pull the soil back and place the quilt a few inches down, cover it with new soil, and put branches around its perimeter to sustain the shape.

“Over the next few months or so, it starts to grow,” she said. “Usually green pepper seeds and pumpkin (seeds) will sprout. We become stewards of that little plot by meeting there a couple times.” 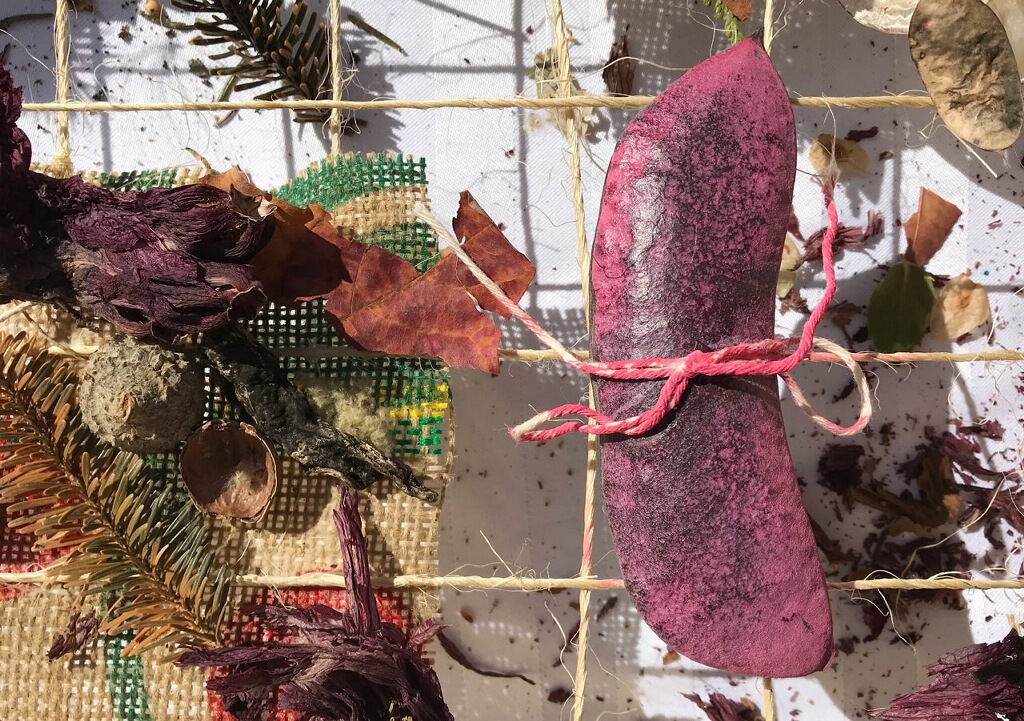 Her workshops have made business people spend more time outside and make sustainable choices, she said.

“I believe it comes down to a practical level — being thoughtful about reducing waste, recycling,” she said. “Also, it’s like the beautification and the connection to nature. Choosing to go outside (during) lunch instead of sitting inside of the office and staring at the desk.”

Before attending the workshops, she would walk into forests but never notice the details of plants, Young said.

“It helped me stop and take the time to analyze everything,” Young said. “It can be either a seed or leaf or tree, but also insects or soil. (It) really helped me connect with nature and actually take the time (to do so), which I would never do before.”

Hora’s workshops help children become more aware of where their food comes from, she said.

“Kids nowadays, they literally don’t think about what happens with macaroni and cheese,” she said. “They’re literally so disconnected from their food system. It’s crazy. They’ll find a kernel (and) they’re like, ‘wait a minute, they come in a bag and they’re ranch flavored.’”

After making the connection, kids will then bombard her with questions. 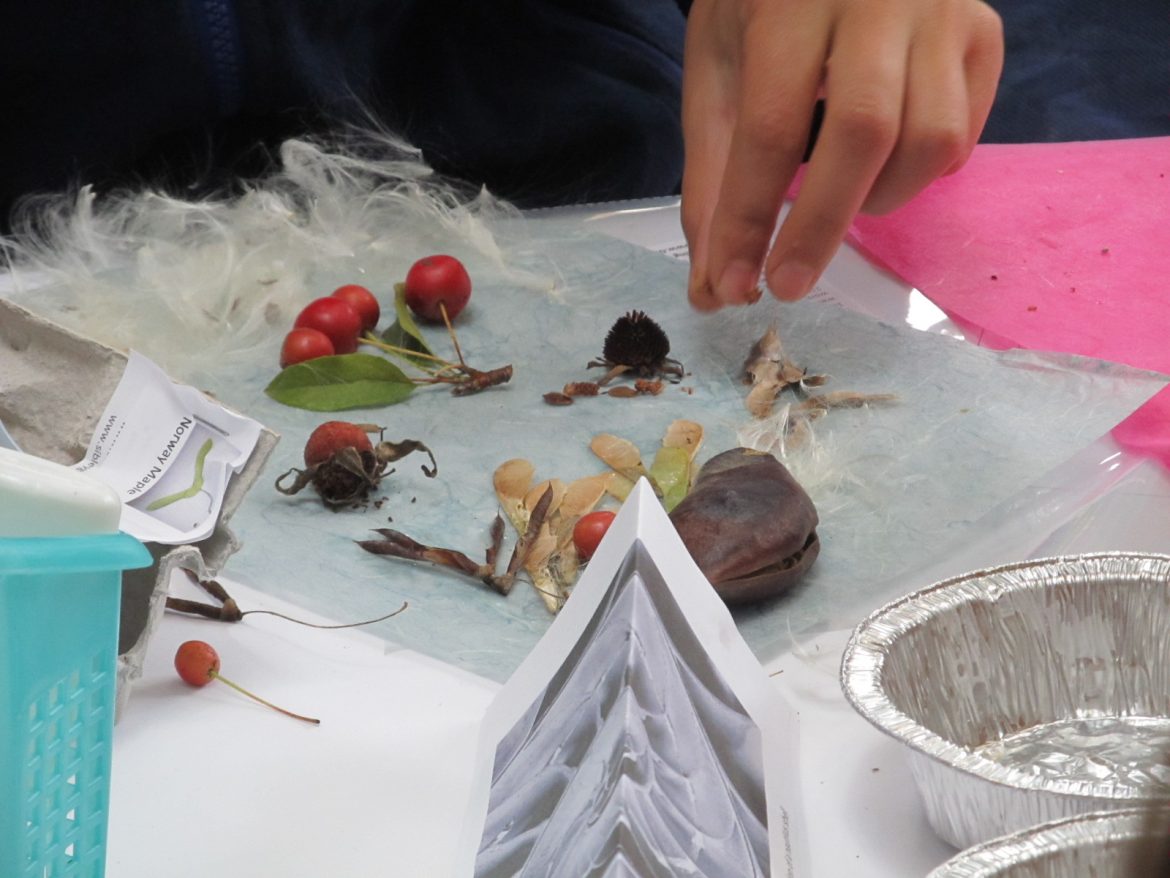 Hora, now living in Chicago, has been a preschool teacher at the Austin Gardens Environmental Center in Oak Park, Illinois for three years. She teaches early childhood nature education.

One of her students, five-year-old Elliot Tanaka, has made his family be more adventurous outside.

While adults think of cold weather or rain as a problem and messy, Elliot finds it as an opportunity for adventure, said his mother, Amanda Tanaka.

“I think that has kind of changed our family culture to embrace being outside under any circumstance,” she said.

Elliot thinks of himself as a scientist because he asks questions, she said.

“That is such an awesome concept for her (Hora) to be instilling in like these little tiny kids — that they’re protectors of the earth and also scientists for noticing things and asking questions about them,” she said.

2 thoughts on “This art plants seeds of environmental awareness”