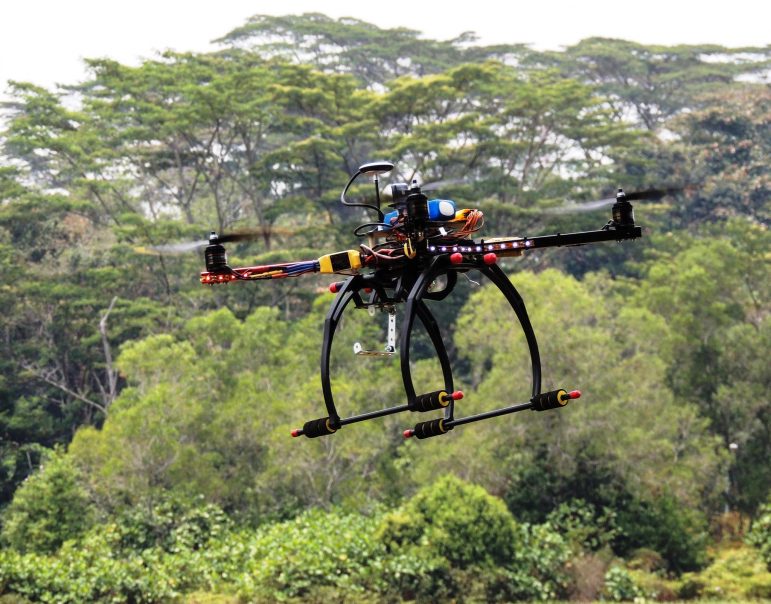 Now that drones fly in the face of state prisons, some lawmakers want to restrict the airspace over and near those facilities.

Recently, drones have been spotted flying over state prisons, making officials nervous. Exacerbating their worries is contraband dropped by the drones into a prison.

“We receive reports of drones flying over or nearby multiple times a month, sometimes multiple times a week,” said Chris Gautz, the Department of Corrections public information officer. “It creates a huge strain on the facility. So when people are dropping cell phones, guns or drugs, it’s a huge security concern.”

Although no guns have yet been reported as dropped into prisons, both prison officials and state politicians are worried it could happen. Last summer, a drone dropped razors, drugs and cellphones behind a  prison fence, prompting some lawmakers to introduce bills that would outlaw the craft above or near prisons.

It’s  a safety issue, said Rep. John Chirkun, D-Roseville, a primary sponsor of one of the bills. “I’ve heard from sheriffs from the three biggest counties in the state of Michigan concerned about this, so I decided to pick up the ball and run with it.”

His bill would outlaw the piloting of unmanned aircraft within 1,000 feet of state prisons, municipal police departments and state court buildings.

The incident that prompted the legislation occurred last August at the Richard A. Handlon correctional facility in Ionia County. Three men were charged with smuggling weapons, drugs and cellphones into the prison.

Gautz said that because of the threat, when a drone is spotted near a prison and inmates are outside, sirens blare and prisoners are moved back to their cells. “We have to conduct a large-scale search of our entire prison grounds.”

A challenge for the state legislation is that regulating where drones can be flown flies into the jurisdiction of the Federal Aviation Administration (FAA), which regulates airspace.

“I don’t know where this is going to go,” said Robert Goodwin, a senior geospatial analyst/project manager with Michigan State University. “I understand the spirit of the law, but the FAA stepping in will open a huge can of worms.’”

Drone piloting, whether as a hobby or for commercial purposes, is new airspace for the FAA, said Goodwin, who pilots drones for university research. Because flying drones is new, the FAA is unlikely to support state restrictions on where they can be flown. Often state governments try to regulate where drones can be flown but don’t have authority to do so.

“Typically communities try establishing ordinances that say, ‘Listen, you can’t fly over a park,’ which they have no jurisdiction over,” he said. “Even if they make that statement saying someone can’t, it won’t hold water.”

But another lawmaker, Rep. Tom Barrett, R-Potterville, says that because the FAA hasn’t restricted where drones can fly, the state can.

If the federal government decides it doesn’t want to regulate where drones can go, then sstates can,  Barrett said.

As Chirkun tackles drone restrictions, Barrett is sponsoring a bill to allow an agreement between the FAA and police agencies for local authorities to enforce regulations relating to operation of unmanned aircraft systems.

Other solutions besides outlawing drones above state prisons include making it difficult to fly them, Barrett said. But those technqiues are expensive and not perfected, like frequency jammers the military uses to block radio waves.

“I think in the absence of those solutions, we should at least regulate and make it a crime,’ he said. “I’m not the one that favors regulation, but one that likes public safety.”

Goodwin sees problems for both hobbyists and commercial drone pilots if the state’s airspace starts to get regulated.

“From my standpoint, if they are going to choose an area, put a circle around it and say you can’t fly here, that can limit you a lot,” he said. “There’s going to have be exceptions to the rule set in place.”

As soon as states or the FAA regulate where drones can go, more rules will follow, Goodwin said.

“What if prisons want to use drones themselves? Or maybe a farmer wants to do agriculture research on his dairy farm. There’s all sorts of crazy things that are going to happen over the next several years in terms of what will and will not be allowed.”

One thought on “Drones raise issue: Who controls prison airspace?”