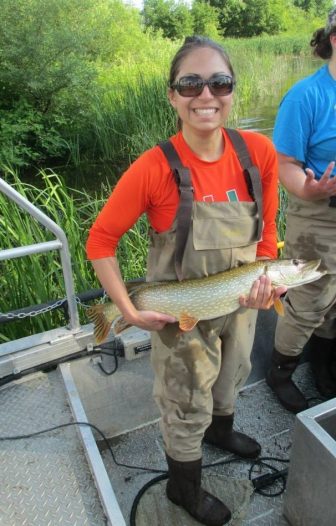 Katie O’Reilly spends the summers “mucking” through the marshes and wetlands of Lake Michigan collecting yellow perch (Perca flavescens), and performing fish autopsies to learn about where they’ve been and what’s been on their metaphorical meal plates.

Yellow perch are wanderers, she said. Their ear bones share secrets about their lifespan, while trace elements within the bones can detect where they’ve been.

But in December, while juggling her student life as a doctoral candidate at Notre Dame, the fish “brain sturgeon” takes a little time to be “punny.”

O’Reilly created a new holiday celebrated on Twitter with the hashtag “#25DaysofFishmas.” It’s a hat’s off to Great Lakes fish — a group of animals that O’Reilly said are often out of sight and out of mind.

“Not a lot of people spend a lot of time in or under the surface of the water,” O’Reilly said. “So kind of goal for this was highlighting these really cool species of animals and combining my love of terrible puns in coming up with “25 Days of Fishmas.” 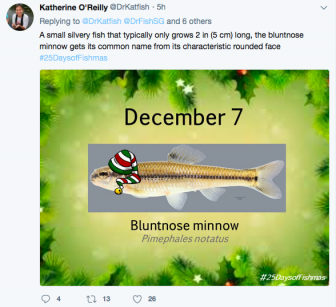 O’Reilly’s featured fish arrive daily on an Advent-style calendar as countdown to the 25th. They are donned with festive holiday hats. The bluntnose minnow arrived with a green, red and white striped hat comically placed over its serious fish face on December 7.

The point of the project is education, O’Reilly said. “Just kinda talking about, this is the type of fish we are working with, this is what the fish eats, this is where it lives, as well as diving a little bit more, and that’s also a terrible unintentional pun. Diving a little bit more into the bigger picture of where does this fish fit in mainly in the Great Lakes.”

But the hats help create dialogue between ordinary people and experts on topics like the environment, water quality, pollution, habitat changes and invasive species like the ruffe (Gymnocephalus cernua). The ruffe invaded the Great Lakes in 1980s and competes for food. O’Reilly calls them for unnecessary “ruffe-ness.” 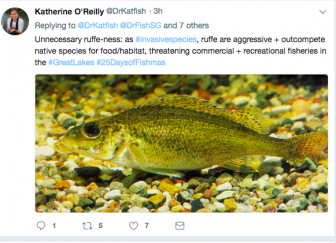 “When I created it (#25DaysofFishmas) last year I didn’t think it would be popular outside of my core group of fish-nerd friends,” she said. “But what surprised me is that it grew way beyond my fellow circle of fellow scientists and researchers, and it became something that transcends some of those divisions between those groups of people.”

She said alewives (Alosa pseudoharengus) also spawned a lot of comments, with some people recollecting massive die-offs that lined the shores of Lake Michigan in the mid-1960’s.

O’Reilly’s followers increased from 1000 to 1500 last year. She’s added more online chums for Fishmas 2017 as a result of the interest. Many seem to be having fun with her fish facts.

While the holiday season may usher in snow, #25DaysofFishmas will feature a mix of science and good humor, O’Reilly said.

“Maybe it’s a fish native species in the Great Lakes but it’s been taken to other places across the world, and it’s been established there, so basically just the bigger picture of where that fish fits into our ever-changing human world,” O’Reilly said. “But, also lots of pictures of fish with Santa hats on and terrible fish puns. Mostly that.” 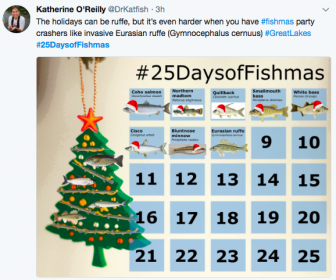 O’Reilly started Fishmas last year. She was encouraged by followers to continue. Fish fanatics from other regions also launched Fishmas celebrations on species outside of the Great Lakes. O’Reilly said she’ll probably continue the tradition next year.

“There’s always more Great Lakes species that I still haven’t touched, and maybe it will even expand outwards to North American fishes, but I still think I’ve got at least one more year of Great Lakes fishes in me.”