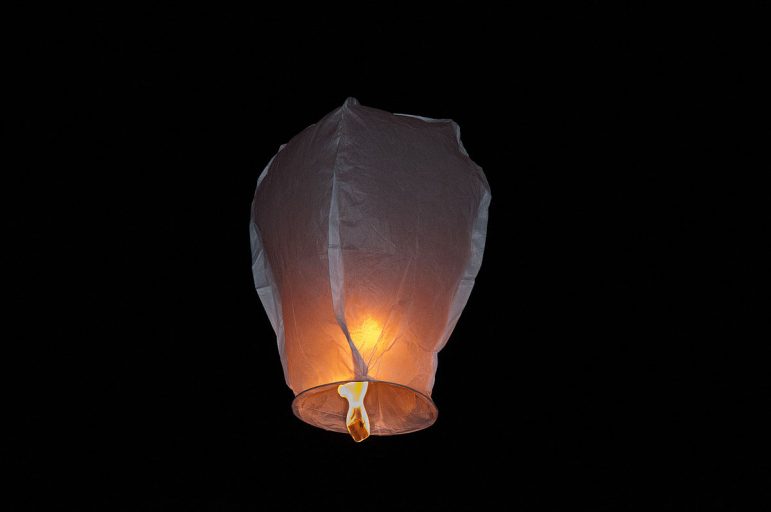 Sky lanterns are popular during Independence Day Festivals, but environmental groups and farmers say they are dangerous. Image: Barry Peters

Sky lanterns are made of paper, cloth and string. They use wires or bamboo for support. So-called fuel cells made of cardboard and wax allow them to float when lit.

Yanez, a former firefighter, proposed a bill this winter to roll back the state’s fireworks law and eliminate the lanterns. They’re already illegal in 29 states, including Minnesota, Illinois, Indiana and Ohio. 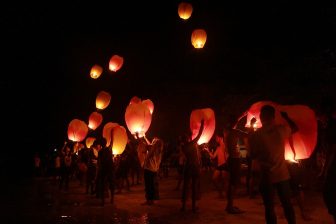 Sky lanterns are popular throughout Asia. Other regions, including Spain, Germany, Brazil and Australia have laws against their use. Image: Pixabay

Citizen worries over fire hazards prompted the so far unsuccessful try at a ban, he said.

“We heard from many of them that the sky lanterns were an issue too and people were sending us news articles of fires that were suspected to be caused by sky lanterns,”  Yanez said.

The lanterns are often part of celebrations and tributes, and are even more common around the 4th of July.

Light the Sky-Grand Rapids is slated for a lantern launch at the I-96 Speedway in Michigan’s rural Ionia County on Saturday.

More than 500 people bought tickets to launch lanterns to raise money for refugees, said Dane Cannon who works for the company marketing the event.

His firm is being proactive, working with manufacturers to reduce the flight distance to three-quarters of a mile or less, depending on the winds, he said.

“It seems like as we’ve talked to fire officials who’ve held these events in their municipalities is that their main concern is fires only on the way up, not necessarily on the way down because on the way down you know that the fire is already extinguished,” he said.

They use biodegradable lanterns. Cannon said he isn’t sure how long it takes them to biodegrade.

Volunteers will pick up lanterns following the event, Cannon said.

Patrolling farm fields for litter that could be a hazard to livestock is a daily chore for Amanda Powell, who runs Oak Row Angus in Ionia County, Michigan.

“They look nice going up but when they come down they have an impact on the environment and animals,” she said.

“We found one place where you could see it caught fire a little bit. It stopped, but it didn’t have to. If it had been a really dry year, it could have gone from there,” she said.

Powell said she has found lanterns with wires in pastures.

And metal objects caught in harvesters and ground into feed can kill livestock, she said.

“The way that cows digest their feed is that it goes into their stomach and she rechews it again later . . . she may not actually chew it and realize it’s something that she should not eat,” Roberts said.

Farmers often put magnets in cattle’s stomachs to prevent hardware disease, Roberts said. While lanterns made of biodegradable materials can likely be digested,  no animal should eat trash.

“One big part of that is making sure that the feed is safe for them and isn’t going to make them sick,” she said. 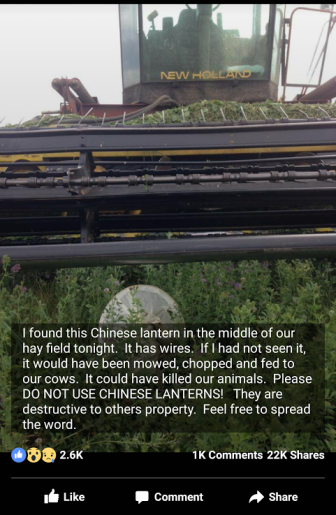 The post by Abigail O’Farrell, co-owner of Lemajru Dairy Farm, said lanterns can kill her cows. It received thousands of comments. Some were critical.

“I have friends that I know have lit them off in the past year, and I know when it comes to memorials to tell someone it is a bad idea when they are trying to remember a loved one you are dealing with emotions and it isn’t the right time and right place,” O’Farrell said.

Other people opposed bans and commented that many things are dangerous to animals and they can’t all be banned.

Even if people aren’t concerned about livestock, O’Farrell hopes they will use biodegradable lanterns and not light them during drought or near dead trees.

The group said even biodegradable lanterns  threaten wildlife because animals get caught in the strings.

“I don’t think people understand the consequences of sending something up in the air and realizing it has to come down, so there is an education process that needs to take place,” he said.

“Whether it’s with wire or biodegradable, whatever it is made of, they are going to come down somewhere and it’s not on your property,” he said. “It’s somebody else’s property and there are negative impacts of that.”

Michigan, Wisconsin and Pennsylvania are among the Great Lakes states without a lantern law, but some local ordinances prohibit them.

A statewide ban in Michigan is unlikely, partly because his legislation is attached to restrictions on fireworks, Yanez said.

“People make a lot of money in a very short amount of time selling these fireworks,” he said.

Caution about where lanterns are launched is likely the only solution unless a large-scale incident spawns interest in the bill, he said.