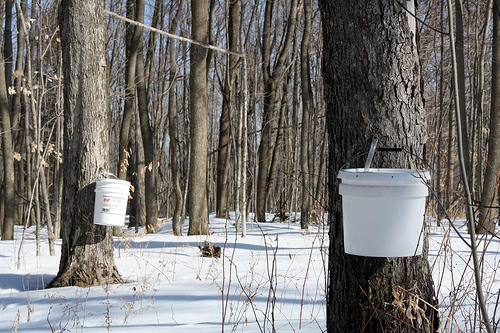 Maple syrup is a cultural staple of the Great Lakes region, but warmer weather is posing a bigger threat to producers south of the Canadian border.

“It is a potential issue,” said Gary Bilek, president of the Pennsylvania Maple Syrup Producers Council. “With the long periods of warm weather that we experienced in January, and one that we’re literally just finishing now as it’s turning to snow outside, the syrup season has started much, much earlier than normal.”

The syrup season starts when producers tap their trees. The timing of a maple tap is one of the most important decisions a syrup producer makes,  Bilek said.

Tap too early, and one risks missing prime sap production. Tap too late, and sap will taste bitter and woody.

Trees treat tap holes as a wound and usually take between six to eight weeks to fully close. Timing the tap around this healing process is key to collecting the most and best tasting sap.

Maple syrup producers in states around the Great Lakes are tapping earlier than usual because of the warmer weather.

“I have somebody from the Adirondacks who said to me just yesterday, ‘In 95 years, this is only the second time I’ve tapped in February, and the other time was in 2012,’” she said.

Like other farmers, maple syrup producers are beholden to the weather and have to make the best guess as to when to tap their trees.

“That’s one of the things about farming,” Bilek said. “If you want to know when’s the best time to tap, ask me after the season’s over and I can tell you when it was.”

This is where the recent string of unseasonably warm days became a problem. Nighttime temperatures stayed above freezing, sometimes as high as 45 or 50 degrees, in syrup producing regions of New York, Pennsylvania and Ohio. Without the normal temperature drop, the sap doesn’t move down deep into the tree’s roots, which is where it draws nutrients and the resulting flavor in its sap.

The impact of warm weather is especially felt by states that depend on the ice cover of the Great Lakes.

In Ohio, where the majority of its syrup is produced in the northeast near Lake Erie, there has been little to no ice coverage for the past two years. As a result, the necessary cooling effect from the Great Lakes is greatly mitigated, said Les Ober, the agriculture and natural resources program coordinator for Ohio State University Extension.

Another crucial factor is daylight, which is another reason that earlier maple seasons are becoming more problematic for producers.

As the tapping season moves closer to the start of the year, the amount of daylight hours decreases with it. Where Bilek taps, the average ratio is around 11 hours of daytime to 13 hours of night. Other areas of maple country get an even split of 12-12.

“But if we keep moving earlier and earlier we’re not going have the hours of daylight to be able to get the flavor and stuff in the syrup,” Bilek said.

Adapting to these changing conditions is much more difficult for those producers that maintain the traditional sap collection method, done through a metal tap with a bucket underneath, a group that is only going to become smaller as conditions make traditional collection untenable, Bilek said.

Most farmers have adopted new technologies which makes sap collection far more efficient. Many of these improvements were spurred by the strain that climate change has put on maple farmers’ profits, Ober said. 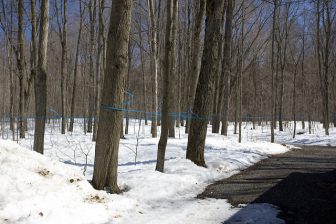 Sap runs from these plastic lines to larger tubes, to then be transported to a boiler to begin the syrup making process. Image: Michel Rathwell

Reverse osmosis innovations that extract water from the sap and concentrate the sugar  have been particularly significant, Ober said.

“It would be totally impossible without that machine to process the kind of syrup that (producers are) processing,” he said. “To run 10,000 taps without a reverse osmosis would not be economically feasible or maybe even feasible in timeline.”

These developments have become even more valuable to Great Lakes producers, who are more acutely affected by the warming climate than their competition in Vermont, Ontario and Quebec.

Making long term projections about the industry or the impact on maple tree health is difficult due in part to the lengthy lifespan of a single maple tree, said Tim Perkins, the director of the University of Vermont’s Proctor Maple Research Center.

He urged caution against any dire predictions but acknowledged that Vermont could start to see shorter transitions between winter and summer, which would definitely have a negative impact on yield.

“Whether or not that happens or how much that happens will be determined by climate over the long run,” Perkins said.

Rather than looking at Vermont and the bigger maple producers,  it may be more prophetic to observe developments in West Virginia, Ober said. While not a major competitor in comparison to other maple producing states, West Virginia is home to a notable population of red maples.

“I always say if you watch West Virginia, it’s like the canary in the coal mine. What happens down there may be an indicator of what’s happening in the north,” Ober said.

Because of West Virginia’s climate, their maple season has always started earlier in comparison to other maple producing states. Their climate is not as conducive to large scale maple production. These harsh conditions have led to many innovations in maple management and enterprise startups.

“Maybe this is the model we’re gonna have to look at to get some idea of how to go about looking at how to handle this in the future,” Ober said.

“After last year and this year, you’re not gonna trick these producers again. They’re gonna be ready to tap trees on the first day of January, and if that’s the new norm, January and February, then I guess that’s what it’s gonna be.

“In March we’ll all go fishing.”