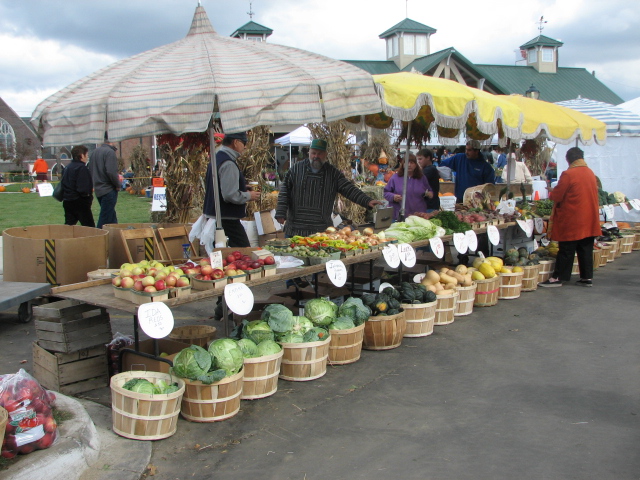 Changes in the weather have enabled Michigan farmers markets to open earlier and close later in the year. Image: Wikimedia Commons

As the weather continues to fluctuate around Michigan, farmers are being forced to adapt to changing conditions.

Amanda Shreve, the program director for the Michigan Farmers Market Association, said farmers can adapt to virtually any weather condition. She also said that as a result of warmer weather for longer periods throughout the year, farmers markets open earlier in the year and close later than they used to.

“We used to have a general farmers market season of July — September, but now we see a lot of markets starting in May and going all the way through October or November,” Shreve said.

Some crops come in early as a result of the warmer temperatures, too. Maple syrup is set to come in about a month early, said Savannah Halleaux, a public affairs officer for Michigan’s Federal Service Agency in the U.S. Department of Agriculture.

Michigan ranks 5th in production in the nation, according to the Michigan Maple Syrup Association.

While it may be too early to tell the full extent to which farmers and their crops could be affected by changes in weather, Shreve said it could pose a problem for farmers in the coming months if fluctuations continue.

Kiflam “Kif” Hurlbut, the deputy regional director of the National Agricultural Statistics Service, also said it’s still too early to tell what the effects of the warm winter weather will be.

Even so, Hurlbut said the condition of the wheat crop is the biggest concern right now.

“Usually there’s snow cover on the ground to protect wheat from extreme variations of temperature, and this year that isn’t there,” he said. “Wheat is most vulnerable in winters that we have like this that are widely variable to being drowned out or having ice form on it, or it’s exposed to very significant drops in temperatures.”

That is a negative effect, Hurlbut said, because it will likely shorten the season.

Most growers prefer a season of normal length and normal production over an earlier start to a shortened season, he said.

For farmers harvesting time-sensitive crops like asparagus, there isn’t much wiggle room when the crop is ready to be harvested, Hurlbut said.

Michigan ranks high in vegetable production, including second in the nation in asparagus in 2015. 2016 statistics have not been finalized, he said.

“I’m sure the asparagus growers around the state are watching the warm spring very closely,” Hurlbut said.

Michigan is a major fruit producer and grows the largest amount of cherries in the nation, Hurlbut said. He also said Michigan is in the top five for of apples and blueberries.

As far as fruit crops go, “the last I’ve heard in this continuing development, they’ll still expect to get sufficient chill hours,” which allow trees to reset for another cropping season, Hurlbut said.