Do we have a sense of urgency when it comes to environmental issues?

I’m talking President Kennedy’s let’s go to the moon before the end of the decade urgency.

Not aspirational goals urgency like the current proposal to reduce algae in Lake Erie. Or so-called progress measured in the tiniest of increments because we need to demonstrate success to keep the funding coming.

I ask because I recently spent time in drought-stricken Northern California traveling from San Francisco to Calistoga, Sacramento and east to the Sierra Nevada foothills. In my informal observations and conversations I didn’t sense an urgency concerning the drought now in its third year.

I talked to family, friends and local residents and there was a casual shrug about the drought. Yes, they understood it’s serious and said they try to conserve. But their responses seemed obligatory and perfunctory. Like it’s what they’re supposed to say when someone asks.

Waiters automatically brought water to the table and generously refilled glasses, even if we didn’t ask. There were no exhortations to take short showers or turn off taps.

Compare this to my previous visits to California during a drought in the late 1980’s.

Water was not offered in most restaurants. You had to ask for it. When served it came in a short glass, not a standard size. Refills? Good luck. Stickers on hotel room bathroom mirrors requested short — five minute —  California showers. They also told you to turn off the water when brushing your teeth.

Leaving Calistoga heading east I passed Lake Berryessa. Not a great lake like I’m used to but a substantial one by California standards. Water levels were noticeably low and later research revealed that the lake was at 56 per cent of capacity, down from 87 per cent in 2011.

I finally summoned the courage to ask someone about my lack of drought urgency observations.

“We had a lot of rain last winter so…“ said a gardener who then shrugged. I could have pressed and replied that one normal rainy season doesn’t end a drought. But I demurred, not wanting an argument or debate.

California had mandatory water conservation programs in place but in May replaced them with voluntary ones. That sends the wrong message in a burgeoning state where water supplies are an issue even in non-drought years. 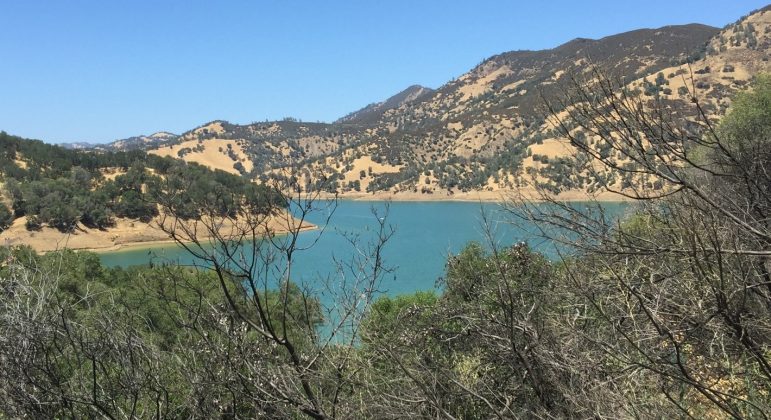 And a three-year drought is a tiny one, scientists say. A ten-year dry spell or longer is possible if not probable.

Life is good in California but one wonders how sustainable it is given the demand for water and that its supply won’t always match.

But what about us in the Great Lakes region? Where are we guilty of a lack of environmental urgency?

It’s not the quantity of water but the quality and two well-known problems jump off the page:

In 2011 the EPA’s Great Lakes office made combating algae a top priority. What’s happened since then?

In 2015, two states — Ohio and Michigan — plus Ontario announced a goal of reducing algae-causing phosphorous by 40 per cent in ten years. How will that happen?

Ohio, the primary contributor to Lake Erie’s problems, has proposed a plan that resembles what hasn’t worked in the past – reliance on voluntary phosphorous reduction programs by farmers. Voluntary programs not only haven’t worked in Ohio, they haven’t worked anywhere. Check the Chesapeake Bay if you need proof. But that’s the plan.

Flint’s water problems had been brewing for more than a year before they hit crisis levels last October and Michigan got off the dime and acted. The people of Flint lived in a crisis every day during that time. And it wasn’t until January that the USEPA used its authority to intervene. Talk about a lack of urgency in a crisis.

There’s more. What to do about that Straits of Mackinac Enbridge pipeline lacks urgency?

It’s approaching three years since the age and condition of the Enbridge pipeline crossing the Straits of Mackinac made the front pages.  Michigan has completed a study — when we don’t want to make hard decisions we study — and is in the early stages of doing a risk analysis. That’s another time-waster that gives the appearance of doing something. Pipelines are inherently risky and older ones more so.

Or how about the move to weaken ballast water regulations that combat aquatic invasive species — think trillions of Quagga and Zebra mussels. I’ve never seen urgency on this issue in my twelve years of covering Great Lakes issues in spite of the havoc aquatic invaders can wreak.

Remember Asian carp? Whatever happened there?

Michigan Gov. Rick Snyder told me two years ago that the region lacks urgency on how to deal with the advance of Asian carp. Rear guard actions have been effective — we think — but there’s no long term plan.

I’ll stop. You get the picture.

After seven years of work trying to restore the Great Lakes in the post, peak-industrial era, we’re still in the early stages. A billion dollars of federal money is the equivalent of jump-starting a dead car battery that needs more than a jump.

If you go to a region like California and feel superior or smug concerning water, think before you judge and critique. We’ve got plenty to do here and like California, we lack a sense of urgency.

I suspect President Kennedy would not approve.

5 thoughts on “Save water? Where’s the urgency?”