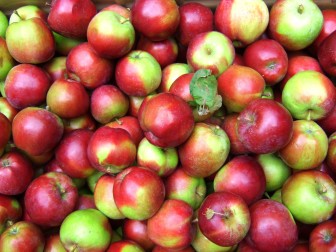 The new containers could extend the shelf life of cherries, asparagus and many other fruits and vegetables. Image: Creative Commons

A new technique would allow Michigan apples to be stored longer without draining their freshness.

JMT US, a French company with Okemos offices, recently finished a six-month study of expanding the freshness of stored apples at Michigan State University. The purpose of the study was to compare the apple quality in controlled atmosphere modules with regular cold room storage, according to a recent Lansing Economic Area Partnership (LEAP) report.

“It’s making a large box that can hold up to 800 pounds of apples into a modified atmosphere container, which limits the gas movement inside through membranes on the lid of the box,” said Randy Beaudry, a MSU horticulture professor.

The low oxygen and elevated carbon dioxide levels in these containers keep the apples from spoiling.

Beaudry helped the French company complete the quality test, said LÃ©a Deberry, an international trainee from JMT.
“MSU has been supportive in allowing JMT US to work with their farm for the storage research project,” Deberry said. “We wanted to work with Dr. Beaudry because of his agricultural expertise.”

As for the results, the  apples in the controlled atmosphere modules had less weight loss than the apples in regular cold storage.

“The [containers] create great value to apple growers and orchards by extending freshness and the available sale time as shown by these results. We are looking forward to expanding our connections with Michigan produce growers to help them better manage their produce storage and become more profitable,” said Benoit Janny, general manager of Janny MT, the parent company of JMT US .

Most Michigan apples are stored in huge rooms with controlled atmospheres, like the ones created in these new containers, according to Beaudry. “But, there are certain occasions and situations where you want a small amount of fruit, and you don’t have the facilities or need for a big room.We want to establish small storage.”
The new containers could extend the shelf life of cherries, asparagus and many other fruits and vegetables, according to Beaudry.

This would be useful for farms, cideries and wineries, and other such small-scale apple vendors. “The number of small farms are increasing, so we expect increasing applications for the container,” Beaudry said.

“There are hundreds of thousands of these in Europe, but just a handful here in the States,” Beaudry said. “They’re just beginning a push here.”