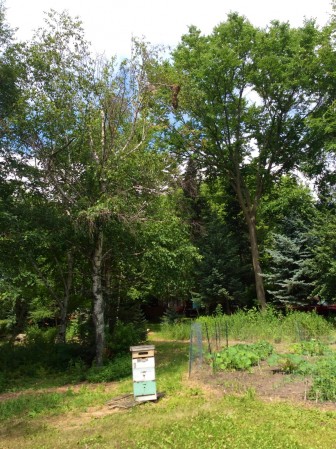 Bees cluster around their queen while they search for a new home. in Green Bay, Wis. Image: Ken Sikora.

Hobby beekeepers in the Great Lakes region have fewer hives this summer after the winter’s record cold killed thousands of the insects.

In Michigan, they lost 60 percent of their bees, said Terry Toland, president of the Michigan Beekeepers Association. Most of those losses were from people who keep bees as a hobby rather than as part of a commercial business.

In Wisconsin, a third to half the colonies were lost in the Green Bay area, said Ken Sikora, president of the Brown County Beekeepers Association.

But this year’s culprit was the cold winter and long spring, Sikora said.

Many things can kill bees in the winter, including moisture, freezing temperatures or a lack of food, he said.

“They run out of honey because the beekeeper didn’t leave enough because they didn’t think the winter would be that long or that serious,” Sikora said. “So there was a shortage of honey left in the hive.“

“They don’t go to sleep, they cluster, they vibrate,” he said. “In the cluster it’s about 90 degrees. The bees on the edge try to work toward the warmer middle.”

The insects move to the middle of the hive to be close to the honey, he said. But if it is too cold they won’t break from the cluster to move to it.

In many cases there will be plenty of honey in the hive after the winter, but it was too cold for the bees to get to it, Sikora said. That’s what appears to have happened this time – the cluster didn’t move to get the honey.

Toland saw the same thing in Michigan that Sikora saw in Wisconsin.

Typically, bees can leave the hives for a short period when it gets warm, he said. When they return, they find the honey and cluster around it to feed.

“This year there weren’t those warming spells at all so they perished in the hive with honey,” Toland said. “We found dead bees with food still in the hive.”

The problem affected even some commercial beekeepers, said Tim Tucker, president of the American Beekeeping Federation. One with 30 years of experience lost about 40 percent of his hives.

“We have hobbyists beekeepers lose all their hives as well,” Tucker said. “I think it’s something external, nothing we as beekeepers have changed. In fact we’re trying to work all the time on the health of our bees. Even hobbyist beekeepers are good at going to meetings or finding out resources available.”

While the lost hives of hobby beekeepers may not impact the honey market, it could discourage them from continuing beekeeping, Toland said. And that could have a long-term impact on the industry.

Commercial beekeepers are needed for all growers of the fruits and vegetables, Toland said. Without pollinators no one can produce those crops.

Sikora builds a box around his hives, insulating it to help the bees stay warm. 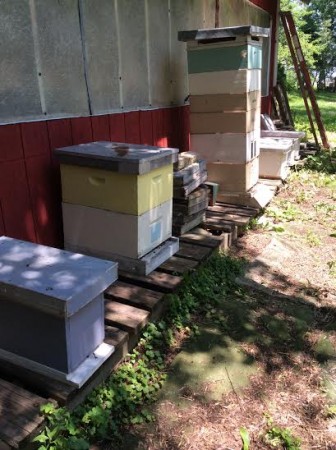 Leaving about five gallons of honey per hive should provide enough food, if the bees can get to it, Sikora said.

Most people did not expect the winter we had last year, Toland said.

“I’m hoping it’s circular and it goes back around to normal, not as brutal as this last winter was for us,” he said.