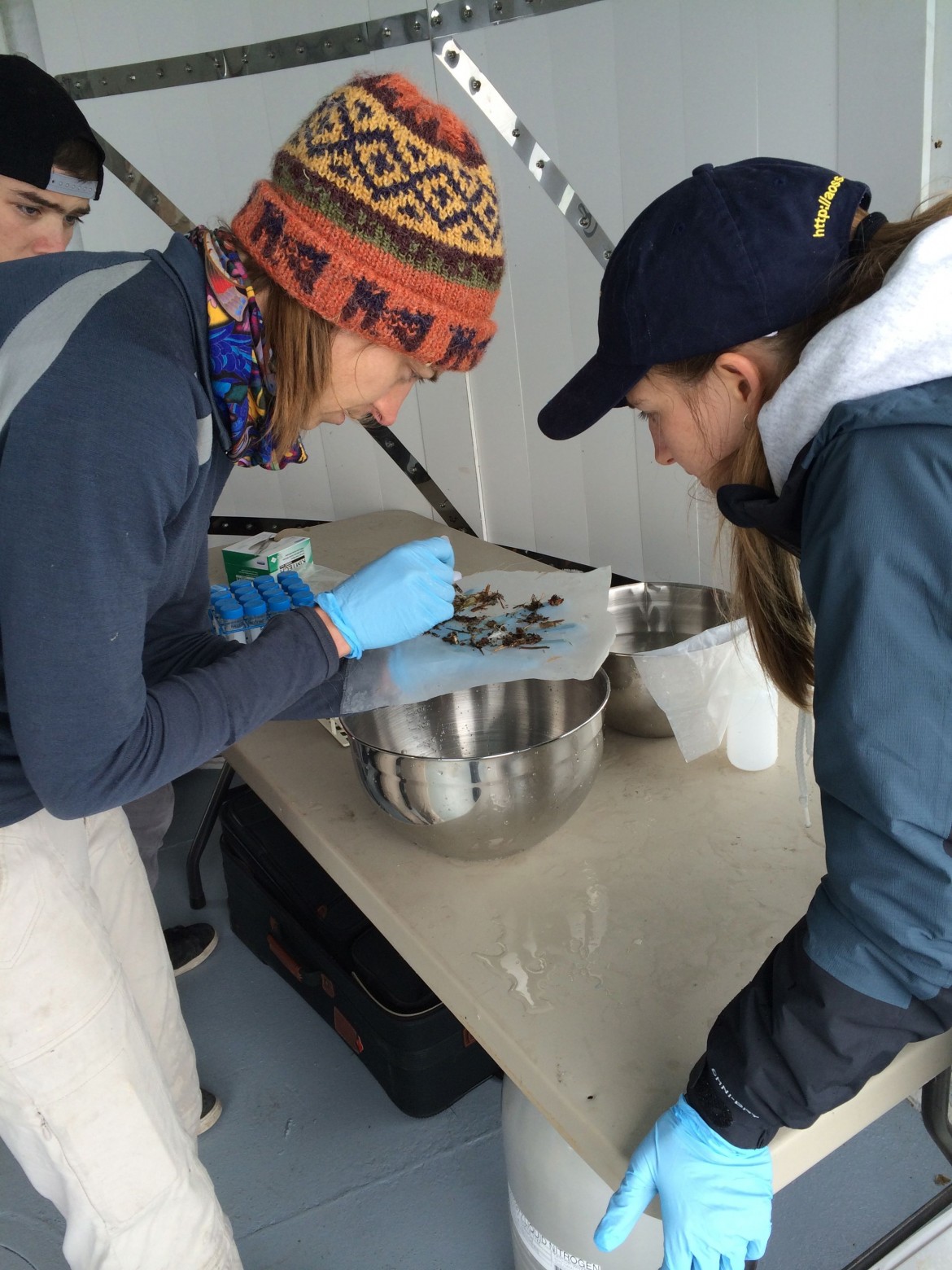 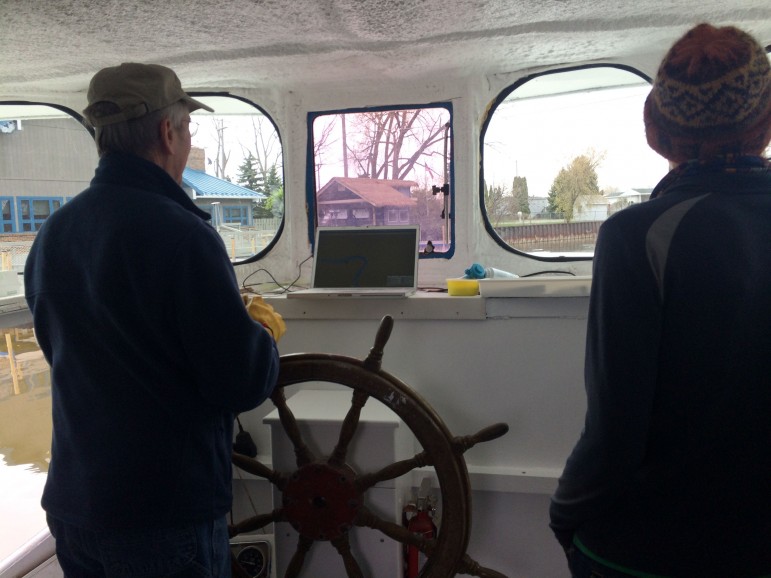 ABOARD THE NANCY K – As David Brooks readies the Nancy K to cast off for its latest Lake St. Clair adventure, he speculates about the source of what he hopes to catch.

It is not fish that he pursues. It’s plastic.

“The sweater I’m wearing is plastic and when it goes through the laundry some of the plastic goes down the drain, some of it makes it through the sewage streaming plant and some of it is floating down the Clinton River in front of us,” Brooks said.

Brooks is furnishing a ride this summer for researchers sailing the Great Lakes in search of tiny bits of plastic. They’re testing how harmful they are to the environment. 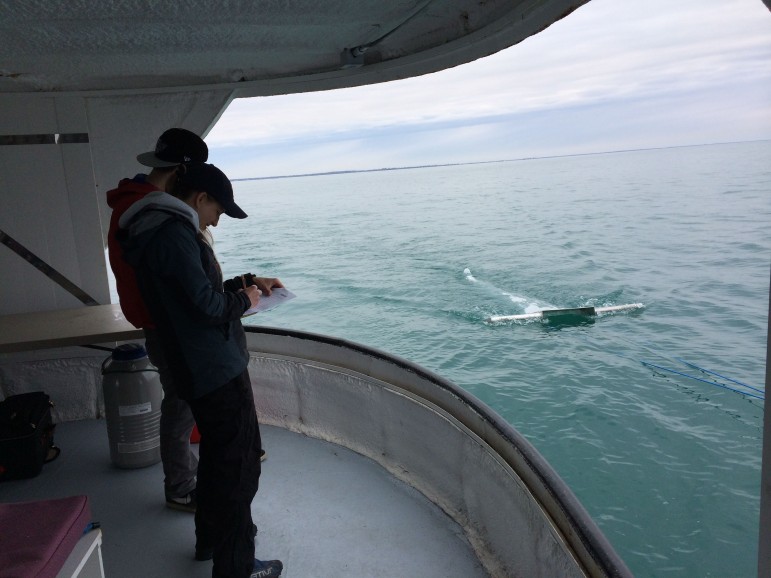 University of Michigan research assistants Rachel Cable and Greg Boehm monitor a net as it is towed every half hour to collect plastic in Lake St. Clair.   Image: Danielle Woodward

“We are starting to appreciate the fact that there is plastic debris floating around in the water and air but the big question that there is really no answer to is whether we should be worried,” said University of Michigan researcher Melissa Duhaime. She was awarded a grant in September from the college’s water center for $270,463 to do the research.

Duhaime is recording where she finds plastic and analyzing it to create a model for policymakers to regulate it and clean it up.

Duhaime’s team is focusing on Lake Erie and analyzing its findings in her lab at the University of Michigan.

“Our approach is to focus deeply and intensely on one lake first and to transfer that knowledge to other lakes,” she said. 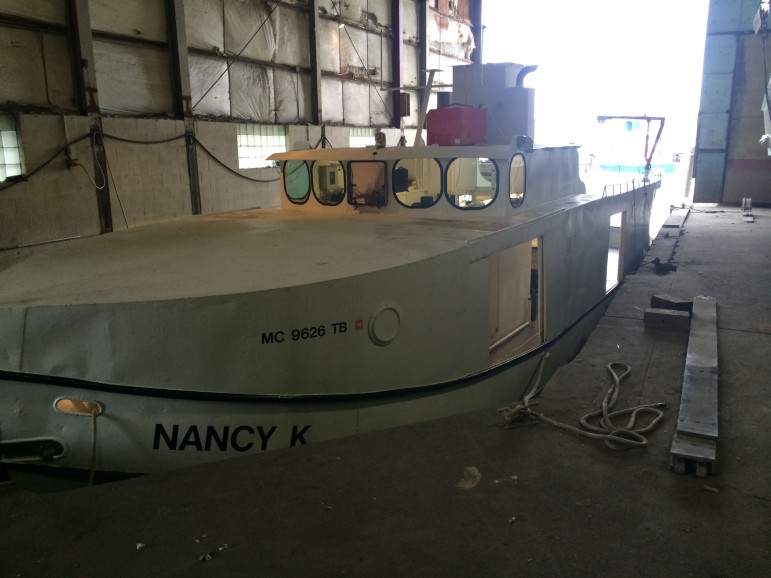 The team is taking samples from aboard the Nancy K, a Great Lakes gillnetter that Brooks has converted into what he calls a “floating field station.”

Great Lakes gillnetters are fishing boats only found in the Great Lakes, Brooks said. They use vertical panels of nets that catch fish by entangling their gills in its mesh.

Brooks is a retired engineer who has done Earthwatch projects for 25 years. Earthwatch is an organization where citizens pay to work for scientists doing field research. Brooks came up with the idea to use the Nancy K to help with the study to combine his love of boating and research.

“Not knowing what kind of scientific work I was going to do, the Nancy K was going to have to be ready for anything.” Brooks said. “I added a generator so we would have electricity, a davit for lowering and raising things from the lake surface and put in bunks, a bathroom and a ladder way. We use Apple computers for navigation and there is a depth sounder on it as well.” 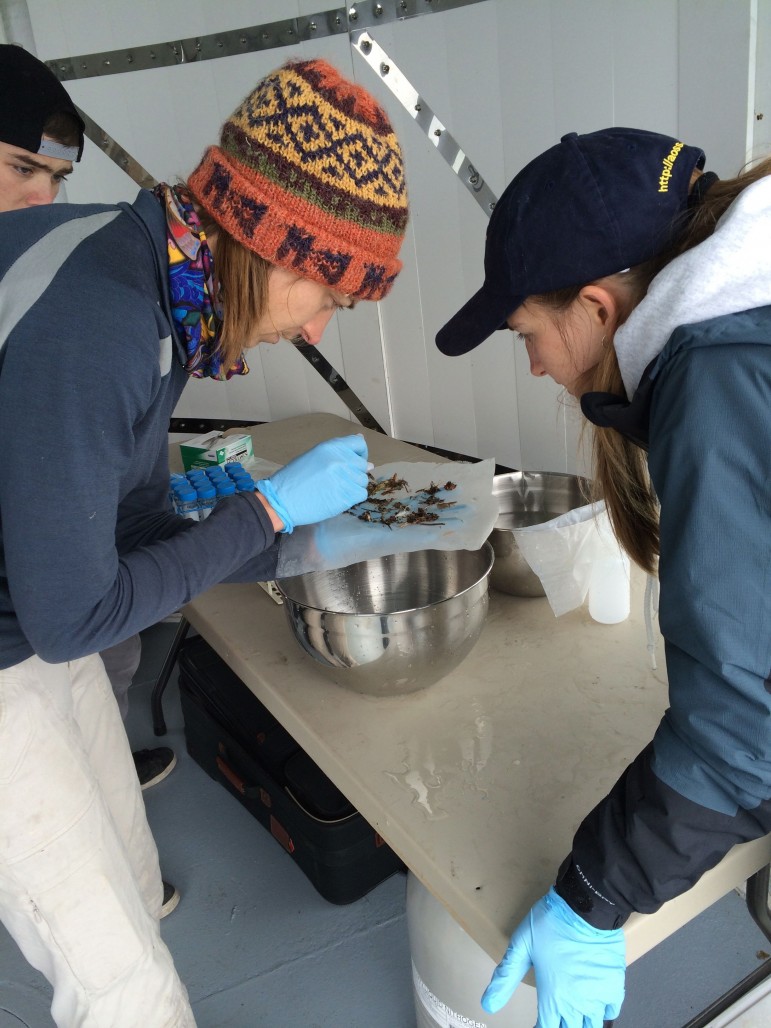 Duhaime’s team is collecting data on how often organisms are in contact with the plastic, which would determine how serious of a threat it is.

“Harm can be incurred by ingestion of bigger pieces of plastic,” she said. “For example, if birds eat bigger plastic, their intestines will get blocked and they will die. Plastic can also be the same size as the food eaten by organisms but give them no nourishment when eaten, causing them to essentially starve themselves.”

Toxic substances sticking to the plastics are another danger.

In a normal system they attach to sediment which falls to the bottom of the lake, Duhaime said. “However, plastics are now acting like sediment but float to the surface rather than sinking to the bottom.”

That exposes the contaminants to animals and fish in the water stream.

Duhaime samples with the assistance of University of Michigan graduate student Rachel Cable and undergraduate student Greg Boehm. They put a net in the water for 30 minutes at a time. Then they visually separate larger particles and take the smaller ones back to the lab to be chemically separated.

They use peroxide to kill and preserve organisms caught in the net so they can analyze what they have been eating and extract DNA to see whether they are an invasive species. 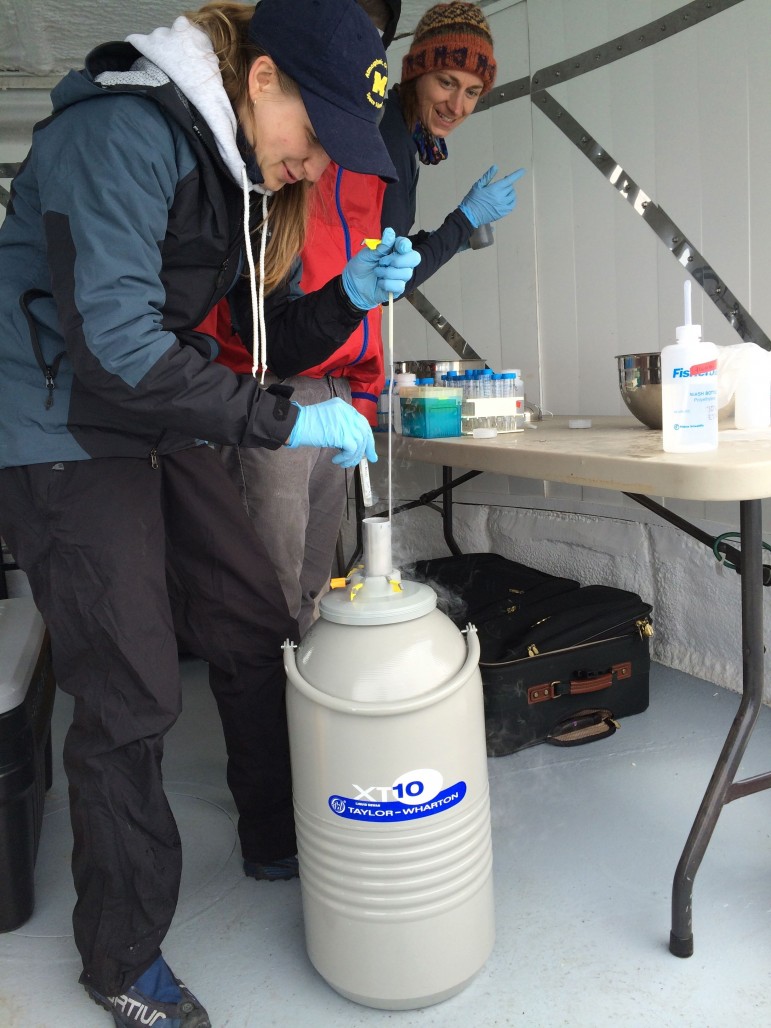 Researcher MelissaDuhaime and team members Greg Boehm and Rachel Cable freeze samples found in their tows in a liquid nitrogen container to preserve them for sampling in the lab. Image: Danielle Woodward

So far she has collected a full fridge of samples to be tested in the lab later this month. She is already able to say with confidence that plastics are in the water.

Garbage thrown into the water is one of the smallest contributors to plastic in the lakes, Duhaime said. Most is coming in massive loads from something else.

How much is coming from which sources are among the mysteries she is trying to solve.

The researchers classify plastic debris into anything larger than 5 millimeters and into microplastics, which are around .2 millimeters.

Duhaime is mainly concerned with the microplastics, which get into the lakes primarily through wastewater treatment plants.

“Microbeads are small beads of plastic often put in personal care products such as face washes, lotions and toothpaste,” Duhaime said. “When people use them and wash them down the drain, there is no good mechanism in wastewater treatment plants to remove these particles. They make their way out of the treatment plants, into the rivers and eventually to the Great Lakes.” 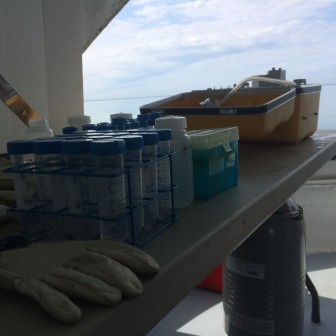 A makeshift lab set up on the boat. Image: Danielle Woodward

Duhaime hopes that her research results will urge policymakers to push for better mechanisms to remove the microbeads in wastewater treatment plants.

People who wash and wear clothes with plastic in them every day are also large contributors, she said. Anything stretchy, like fleece or polyester, is made out of some kind of plastic.

For those looking to do their part in lessening the plastic in the Great Lakes, Duhaime urges to be aware of what products you are buying and what you are throwing away. There is an app for that.

“We aren’t going to have an impact on policy and how companies make and sell products if we don’t change ourselves first,” Duhaime said.