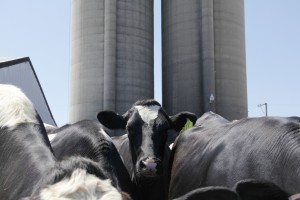 The farming industry feels the lingering effects of the polar vortex in some parts of the state as cold temperatures continue into spring.

County governments implement seasonal weight restrictions on roads every year to reduce the impact heavy trucks can have on roads.

“By law, road agencies can enact weight restrictions on roads that are not designated as all-season routes when conditions merit,” County Road Association of Michigan says on its website.

Although an annual nuisance for drivers, restrictions on weight, speed and axle-loading are tighter this year and slowing down the farming down in some parts of the state. Frost froze deep into the roads and made them more susceptible to potholes, said Clay Martz, manager of Crop Production Service in Lake Odessa, a company that ships fertilizer to corn growers.

“Things that should have been done two months ago are still not done,” Martz said. “Corn still hasn’t been harvested and supplies right now are low.”

Fertilizer supplies are going to be depleted quickly due to the high demand, he said.

Hillsdale County’s roads “seem to be coming together,” said Mark Kies, owner of Mark J Kies Trucking Company in Allen. His company ships fertilizer to farmers as one of its services.

Kies said his business is slightly delayed but is expected to back on track by the end of the month. The Hillsdale County Road Commission is expected to lift the restrictions soon, he said.

“I don’t know about other counties. I think the weight restrictions are probably going to be a bigger challenge for farmers raising livestock,” he said.

The restrictions prevented businesses from shipping fertilizer in time for the planting season, and the low temperatures prevented farmers from letting livestock graze on open fields this spring.

This process is known as turning cows over to pasture, said George Quackenbush, the executive director of the Michigan Beef Industry Commission in Okemos.

“The bigger challenge was during the winter, when the temperatures were extremely low,” he said. “Farmers usually turn their cows over to pasture during the spring, but the late spring put a halt on pasture this year.”

He said farmers had to feed hay longer than usual, and the cost of hay adds up over time.

“We keep them out in grass fields [to graze] and farmers don’t have to bring feed out to them on a daily basis,” he said.

Quackenbush also said cows are not naturally equipped to handling the cold, and farmers have spent more time and money keeping them warm and feeding them.