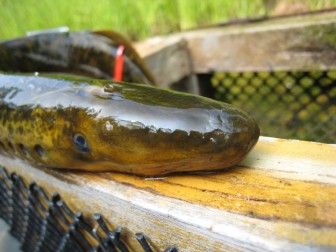 Although a Canada and the U.S. control project has reduced sea lamprey populations by 90 percent and helped the fishery recover, there are still about 400,000 sea lampreys at large in the Great Lakes.

And both project leaders and researchers express concerns about coming threats from the invasive species.

Lake Erie has the fewest sea lampreys among all the Great Lakes, but the commission is targeting its control efforts on the lake because of a recently increasing population.

“We think they are coming from the St. Clair River or the Detroit River,” said Marc Gaden, the communications director and legislative liaison at the Great Lakes Fisheries Commission.

There are two possible reasons that streams previously not infested are now producing sea lampreys, according to Nicolas Johnson, a research ecologist at the Great Lakes Science Center’s Hammond Bay Biological Station in Millersburg, Mich.

Originally, sea lampreys lived only in the Atlantic Ocean but found their way into the Great Lakes during the 1920s and 1930s. They soon infested the entire Great Lakes system.

What the GLFC calls “vampire-like killers” live by sucking blood or body fluids of dominant fish such as lake trout, salmon, whitefish and rainbow trout. During its lifetime, “each sea lamprey can kill 40 or more pounds of fish,” GLFC says.

Until now, pesticides known as lampricide, have served as the main and most effective control tool and have been used in rivers with the greatest density of sea lamprey larvae, according to Michael Wagner, an aquatic ecologist of Michigan State University. But lampricides “eventually hit a point of diminishing returns” when applied to low-density population areas. 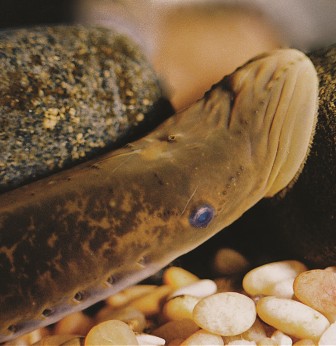 “One solution to this problem is to develop techniques that manipulate the spawning behavior of the adults such that they reproduce in fewer streams — in effect, only creating high-density, easy-to-target populations of larvae,” Wagner said.

Wagner’s research found an “alarm cue” of sea lampreys, a chemical released when a sea lamprey is dead or injured. “It sort of alerts other individual sea lampreys of the presence of risk.”

The research also indicates that sea lampreys have intense repellent reactions to such a cue and try to avoid the area where it exists. Thus it is possible to use this material to change sea lampreys’ migration routes to concentrate them in a few rivers, and then eliminate them all at once.

Johnson talked about another promising tool to increase trapping efficiency — using pheromones as lures. The pheromones, what Johnson calls the “lamprey perfume,” refer to the chemicals released by adult sea lampreys to attract mates.

Johnson’s research team tested 3kPZS, the primary pheromone component released by males, in 20 rivers across the region and found “the capture of sea lampreys on average was about 10 percent higher” in the test areas. In some places, the capture rate was as high as 30 percent.

Gaden said, “It’s very exciting research. We can actually remove these things before they have a chance to spawn.”

The GLFC is sponsoring joint registration of 3kPZS with the U.S. Environmental Protection Agency and Health Canada through the North American Free Trade Agreement. Johnson said, “If approved, 3kPZS will be the first vertebrate pheromone registered as a biopesticide for use in an invasive species program.”

Meanwhile, researchers from both sides of the international border are studying alternative ways to get rid of the invaders that have caused huge damage to the ecology and economy of the region.

For example, another recent study by scientists from the University of Guelph in Ontario and Fisheries and Oceans Canada tried to achieve higher trapping efficiency by recording the behaviors of sea lampreys.

Robert McLaughlin, an associate professor in the Department of Integrative Biology at the University of Guelph, said trapping efficiency currently varies from 12 to 40 percent, depending on time and locations.

Usually, traps are put near barriers on fast upstream runs because it is believed upward-migrating sea lampreys gather at such places. However, the study showed such expectations to be wrong.

Considering sea lampreys’ habit of migrating upstream to spawn, the researchers released 988 sea lamprey 500 meters (1,640 feet) downstream of the traps. Twenty-seven were caught in the two targeted traps and 57 others were captured in other traps along the river.

“Trapping success was generally low under all conditions studied,” according to their article published in the “Canadian Journal of Fisheries and Aquatic Sciences.”

Findings included that fertile sea lampreys have a greater chance to encounter a trap than sterile ones, and lampreys are more likely to come across a trap at night than during the day.

McLaughlin said the research team’s follow-up study found that the lampreys are mostly active at the bottom 20 feet in a river while the traps are usually set at around the top 6 feet of the water, so many of them miss the traps.

The GLFC said, “Continued action and vigilance are needed to minimize their impact on the fishing industry and natural balance. Given even a small chance, this aquatic vampire has proven it can easily come back.”